What does the swami say about a contested GOP convention? 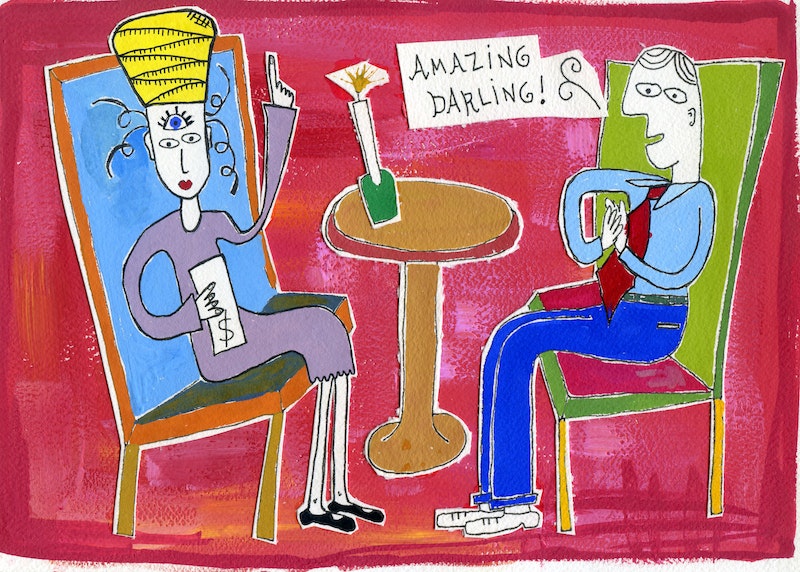 It’s April 8th, and even though the Republican Convention won’t open until July 18th, the media soothsayers, buoyed by the apparent collapse of Donald Trump—not unwarranted, since his inarticulate remarks about abortion might’ve finally derailed his weird campaign—are all jittery, doing a Chris Matthews with tingles going up their legs, making predictions about what’ll happen if there’s a stalemate in Cleveland. A common thread, spelled out by The New York Times’ Ross Douthat on Thursday is that Ted Cruz, the nasty Joe McCarthy-lookalike Holy Roller from Texas with the whipsaw team of delegate-snatchers (as opposed to Trump, who didn’t feel the need to hire any experienced hands) is now the odds-on favorite. The National Review’s Jonah Goldberg, who wrote a superb piece the other day refuting the daft notion shared by conservative pundits like Tucker Carlson, Sean Hannity and busybody Newt Gingrich that a choice of anybody other than Trump or Cruz, who’ve amassed the most delegates to date, would irreparably negate the will of voters, also believes, though more tentatively than Douthat, that the Texas senator would prevail on a second or third ballot.

As I’ve written since the fall, upon realizing Trump’s candidacy was a real phenomenon and not just a publicity stunt—a surprise to everyone, probably including the Twitter/TV ratings booster candidate himself—this nomination is up for grabs. And I still won’t place a single dollar betting on who’ll have the honor of competing against Hillary Clinton (unless, the increasingly entertaining and irritable Bernie Sanders upsets The First Grandmother in the New York primary and starts peeling off her superdelegates) in November. It’s unlikely that faltering front-runner Trump gets the necessary 1,237 delegates by the end of the primary season, and so he and Cruz will duke it out in the early going.

Here’s what I don’t understand: how can the likes of Douthat and his confederates in the media, some quasi-conservative, some hard-core, indulge in such speculation when they’ve been consistently wrong since last summer? New York, Pennsylvania, New Jersey and California—the states most rich with delegates—haven’t held their primaries yet, and if there’s one thing Americans paying attention have learned since January it's that the playing field gets upended nearly every week. While a Trump rebound is unlikely (reversing his negatives among women seems impossible), Cruz isn’t exactly Mr. Subtle, and could make a gaffe of sizable consequence. John Kasich, a spectacular failure so far in the voting, isn’t giving up, undoubtedly hoping that his current favorable poll numbers in a hypothetical match-up against Clinton that dwarf those of Trump and Cruz, will convince the assembled in Cleveland that he’s the best bet to avert an electoral disaster. (Right now, such a fate appears likely if Trump or Cruz prevails, dragging down the Senate and maybe the House, too.) Goldberg says, with confidence, that Kasich harbors a pipedream that’s his alone: “If you don’t like the two entrees on the menu, you don’t settle by ordering the appetizer you really can’t stand.”

Maybe so. But again, this is the strangest political cycle in decades, so who can blame Kasich for hanging out? Or, for that matter, Marco Rubio, who’s gone underground since he was humiliated in his home state of Florida by Trump, but has conspicuously not endorsed Cruz. Marco and what remains of his staff will be in Cleveland, ready to renounce his retirement plans in case the balloting goes past four rounds and it’s a free-for-all. Not to mention picking up the veep slot from the eventual winner. And while Speaker Paul Ryan, bandied about in the media as a reluctant (which I don’t buy at all; the guy’s a politician) savior candidate, has declared no interest in the top job, you’d have to say that compared to Trump and Cruz, the normally boring guy looks like Ike. After all the bombast and tawdry back-and-forth, boring might be the tonic after all, especially considering that Clinton is hardly beloved.

I fully understand that political pundits, whether on TV, print or online, have to keep busy—even if a moratorium on all political commentary until July sure sounds good to me—but why can’t even a handful of them admit they have no idea what’s going to happen. There’s no shame in that: no one else does either.