The Bowery and Forever

Artless monstrosities are an architectural pox on the Bowery. 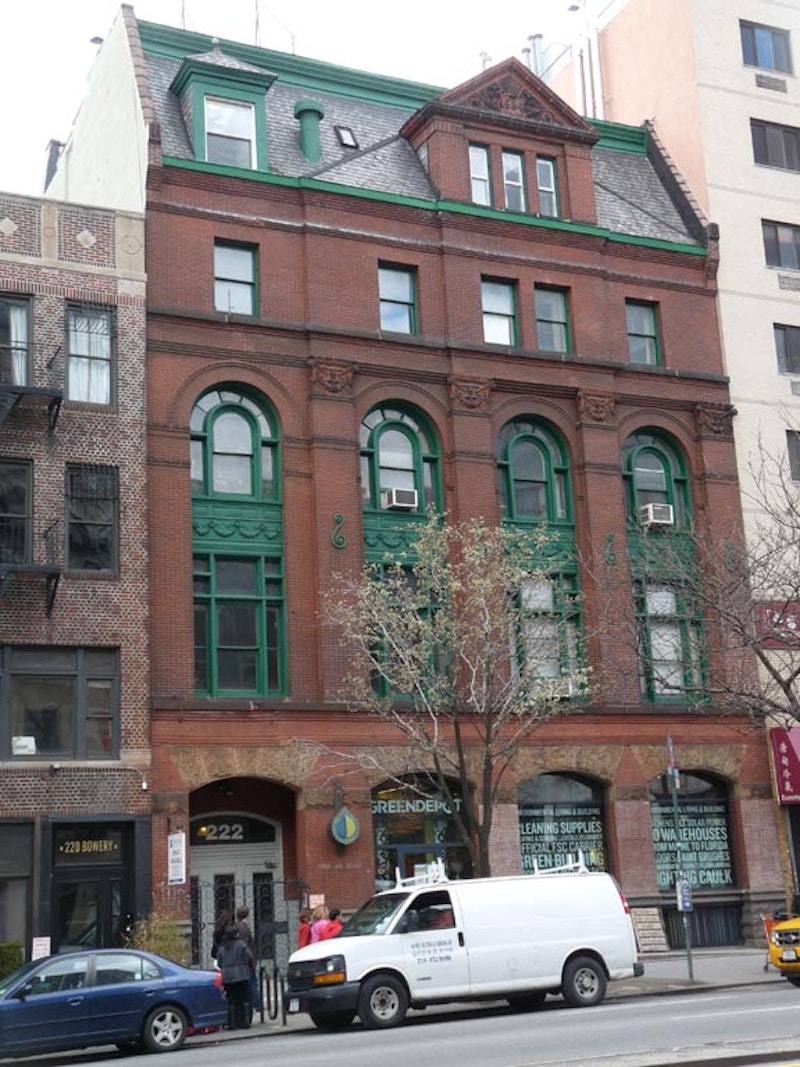 I wanted to see what’s happening on the Bowery lately—I walk its length every few years, perhaps subconsciously calling upon the ghosts of the bums and transients to look amenably upon my trespasses and make my lifelong unlucky streak turn for the better. That, and I wanted to see how much of the old Bowery has held up to the assaults of modernity. I got out of the F train at E. Broadway and meandered back up to Penn Station, snapping away at whatever interested me.

Above we see 222 Bowery just south of Prince. It might look out of place—there aren’t many Queen Anne-style 1884 brick buildings on this stretch, where many of the buildings are considerably older and several more are newer. This was one of the first YMCA’s in NYC, but the Y moved out in 1932 and for the next few decades it was an artists’ haven when the Bowery was at its down-and-dirty worst as painters Ferdinand Leger and Mark Rothko, as well as William Burroughs (he called his space here “The Bunker”), all resided here. It was dedicated a NYC Landmark in 1998. 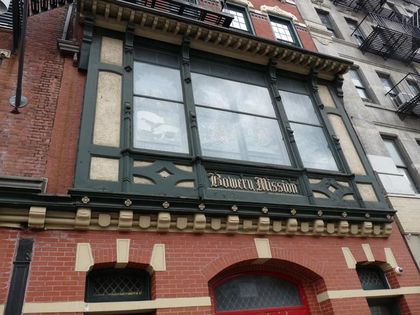 The Bowery Mission, along with the rest of this strip, is depicted vividly in Lionel Rogosin’s 1956 documentary On the Bowery, which is recommended for everyone who now lives along the Bowery’s now-upscale residences. Though the old Bowery disappears by the day, bits and pieces of it remain, from the kitchen and lighting wholesalers, to the Bowery Mission at 227-229 which still ministering to the needy as it has since 1879. 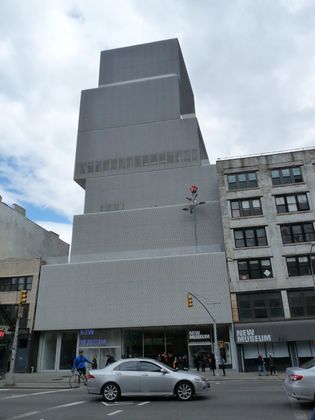 Here’s the New Museum of Contemporary Art, 235 Bowery opposite Prince St., opened in 2007. It’s been uniformly praised by architecture critics and its designers, Kazuyo Sejima and Ryue Nishizawa, were chosen as 2010 laureates in the Pritzker competition, the biggest prize in the architecture game. I’m a Philistine, and to me the building looks like six aluminum boxes from Staples stacked on top of the other, haphazardly. I’d have to go inside, though, to really pass judgment. The New Museum was founded in 1977. 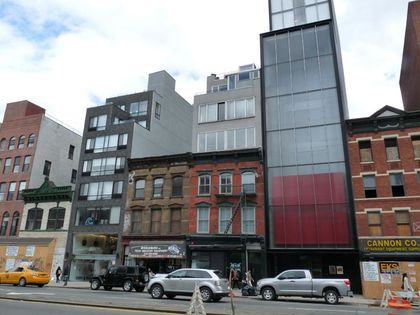 At Prince the Bowery also enters its new high-priced district, with shiny co-op towers either replacing the old walkups, built on top of them, with just the outside walls left for show, or built behind them. The gray building on the left, #267, now stands in the place of Sammy’s Bowery Follies, a renowned Bowery legend between 1934 and 1970.

According to Life magazine, “Sammy’s is a dingy, crowded place. Known for its raucous parties and professional variety shows. From 8 in the morning until 4 the next morning Sammy’s is an alcoholic haven for the derelicts. Bowery characters [eccentrics who’d achieved local notoriety for flamboyant drinking and storytelling] acquired a professional venue at Sammy’s Bowery Follies. Drunks and swells, drifters and celebrities, the rich and the forgotten.” 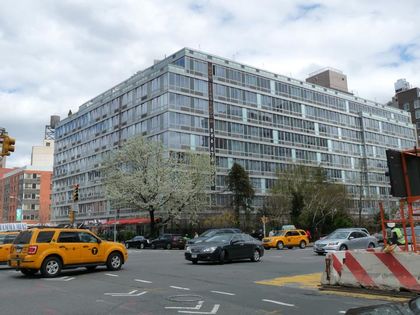 Between E. Houston and E. 1st on the Bowery, developers Avalon Bay have constructed a number of glass-fronted expensive residences. This location is the former home of “McGurk’s Suicide Hall,” a narrow, five-story building. “The Mama Leone’s of dives,” as Luc Sante puts it in his indispensable chronicle of 19th-century New York City, Low Life, displayed one of the first neon advertising signs in NYC, but that was its only concession to modernity. It was opened in this building by Irish immigrant John McGurk in 1895: his previous drinking establishment had been the Mug, further down the Bowery, where the waiters carried knockout drops.

McGurk took similar precautions at his new place. According to Sante, the waiters were armed with chloral hydrate. Prostitutes looking for johns frequented McGurk’s and engaged in a practice that gave McGurk’s its nickname: a suicide craze. There were six in 1899 alone, with the implement of choice being containers of carbolic acid. Most of the women who killed themselves were teenagers between 16 and 18. Waiters came to recognize persons who might attempt suicide and formed flying wedges to eject the aggrieved parties. Nevertheless, the notoriety got McGurk a good chunk of his business. He was forced out in 1902 and would up in California.

Writer/sculptor Kate Millett had an apartment in the building for 38 years, and fought eviction, with other tenants, by the Cooper Square Urban Renewal Area, which proposed new buildings containing 700 apartments, of which they promised 175 would be low-income units. The tenants lost, and finally accepted a relocation deal. The wrecking ball came in 2005. 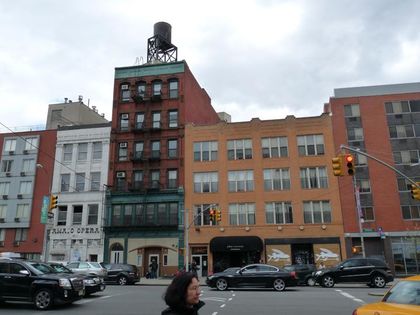 I’m using a photo from a few years ago here, just after the closure of the Amato Opera. Two buildings hosting longtime Bowery music mainstays hosted divergent musical genres on the Bowery opposite Bleecker St. The Opera, left, founded in 1948 by Tony and Sally Amato, was a testing ground for young performers and also presents lesser-known operas by major composers. The Amato was situated in what many experts believe was the world’s smallest opera house. It closed after its last performance of The Marriage of Figaro on May 31, 2009, after Anthony Amato retired.

Two doors down, the light brown building was the Palace Hotel for decades but is more renowned as the home of CBGB, the longtime rock club run by Hilly Kristal between 1973 and 2006. Kristal initially envisioned a country rock club, but when local bands such as Television showed up playing what came to be called punk rock, Kristal adapted and the club became famous. CBGB  is now a John Varvatos fashion outlet. 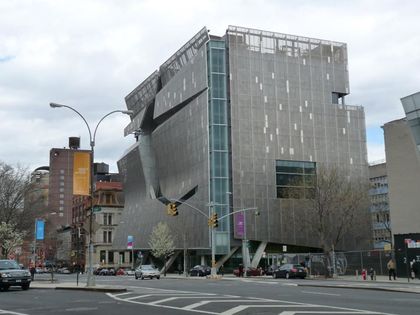 E. 4th is the official end of the Bowery. It does continue north, but splits in two at E. 5th into what will become 4th Ave., west and 3rd Ave., east. The V-shaped mess, on both sides of the Cooper Union building, is called Cooper Square: the avenues don’t assume their numbers until they reach Astor Pl. 3rd Ave. is possibly the longest numbered avenue in New York City, going from here to E. Fordham Rd. and Webster Ave., though in the Bronx, it’s called Third (not 3rd) Ave.

41 Cooper Square, designed by architect Thom Mayne, is the newest addition to The Cooper Union for the Advancement of Science and Art campus. The building, originally known as the New Academic Building, stands on the site where the School of Art Hewitt Building was located. The nine-story 175,000 square feet academic center houses the Albert Nerken School of Engineering with additional spaces for the humanities, art and architecture departments. There’s also an exhibition gallery and auditorium for public programs and retail space on the ground level. Construction of the building began in 2006 and was completed in September 2009.