The Blue State Strategy On Abortion

Ideas from a pro-life resident of Massachusetts. 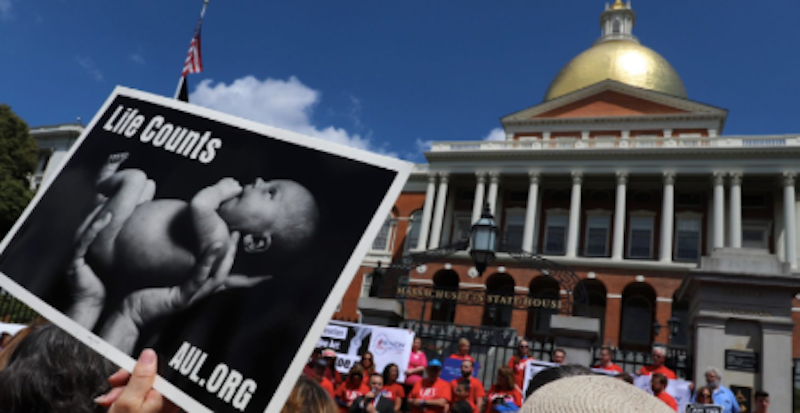 The Supreme Court might overturn Roe v. Wade this year. With a 6-3 Republican majority and the court set to rule on Dobbs v. Jackson’s Women’s Health, a case that’ll decide the constitutionality of pre-viability abortion restrictions, the country will likely see one of two outcomes: states can restrict most abortions after 15 weeks instead of 20 weeks (the case is about a 2018 Mississippi law), or abortion will become a state’s rights issue. The Supreme Court sending abortion back to the states wouldn’t surprise me, and neither would a letdown decision that allows states to change the gestational limit by five weeks.

As a pro-lifer who supports the consistent life ethic, I want a Human Life Amendment added to the U.S. Constitution that protects life from conception to natural death, but I don’t see that happening. No matter what happens with this Supreme Court ruling, however, we’ll likely see changes to abortion law in red, blue, and purple states in the coming years. Red states will restrict abortion. Blue states will liberalize abortion law. And purple states may fight back-and-forth between the two.

I live in Massachusetts. The liberal courts here say that abortion is a right. Republican Gov. Charlie Baker is pro-choice. The state’s last pro-life governor was Ed King in the 1980s. There isn’t one pro-life member of the 40-member Massachusetts Senate. And the pro-choice side has a supermajority in both chambers of the legislature. So while it’s great that some states may enact heartbeat bills later this year, abortion will still occur in this country. Drastically lowering the gestational limit in red states will help prevent some abortions, but I know a heartbeat bill or outright ban won’t come to Massachusetts. Even if liberals eliminate every abortion regulation/restriction in blue states, pro-lifers should keep fighting to reduce the number of abortions that take place while never reaffirming the so-called right to an abortion.

In deep-blue states, weak abortion regulations are filed in the legislature. They’re not good for three reasons. The first is they’ll never pass and are therefore a waste of time. Another is that they often try to regulate abortion as healthcare instead of rejecting that premise altogether. A law that could end with “and then you can kill the baby” is a garbage law that won’t stop people from being killed. Finally, many don’t work and are easy to avoid (think sex-selective or Down syndrome abortion bans; the woman can just say she’s depressed and get a third-trimester abortion for mental/emotional health purposes).

The abortion reduction strategy in blue states requires more creativity – and laws that have nothing to do with abortion.

Some ideas: Ban stealthing. This is when someone removes a condom during sex without consent of the partner. This increases the risk of STDs and unintended pregnancies; half of unintended pregnancies end in abortion. Reducing unintended pregnancies means reducing abortion. Expand birth control and contraceptive access. Unintended pregnancies of low-income and unmarried women are the primary driver of abortion. States can reduce those instances by providing low-income women with free IUDs, a highly-effective contraceptive. Free condom programs could also help. And both could appeal to fiscal conservatives because publicly-funded abortions cost taxpayers money, as do births of children to welfare-dependent families. In the private sector, states should allow pharmacies to sell birth control over the counter. States allow people to get chemical abortion pills mailed to them; why not make it easier for people who live in rural areas and on islands to prevent pregnancy? Eliminate parental rights for rapists. Some states allow rapists to pursue custody of a child. While rape and incest cases make up around 1 percent of abortions, more women may choose life if they can do so without the trauma of their rapist being in their life.

Require safe haven locations to have proper signage. Every state has a safe haven law. It allows people to drop off an unharmed newborn at a designated location without the mother facing any legal consequences. The law exists to prevent infanticide, but a woman I spoke with two years ago at one of the organizations told me that she has spoken with women who have used it as an alternative to abortion; if more people knew of the law, maybe more would do the same.

Establish a state-level child tax credit. Most people who have abortions cite financial reasons as a reason; the average woman who has an abortion already has a child. So what if raising a child was more affordable? The Institute for Family Studies found that a federal child allowance could reduce the abortion rate by about 5 percent.

Teach fetal development in school. The sex-ed curricula in many blue states is garbage. It has a lot of woke gender nonsense and material from pro-abortion organizations like Advocates for Youth and Planned Parenthood. It couldn’t hurt to get people on school boards to implement age-appropriate sex education (pro-abstinence, but not abstinence-only). There are school board races where one can run unopposed and win, or run a write-in campaign because there is no name on the ballot.

Many of these ideas could get bipartisan support. That’s what’s needed to reduce abortion in blue states. Democratic presidents of the past like Jimmy Carter, Bill Clinton, and Barack Obama ran on reducing the number of abortions. The country has made progress but it's still a common occurrence.

Anything that gets us closer to zero instances of it happening in a year is a sign of progress.