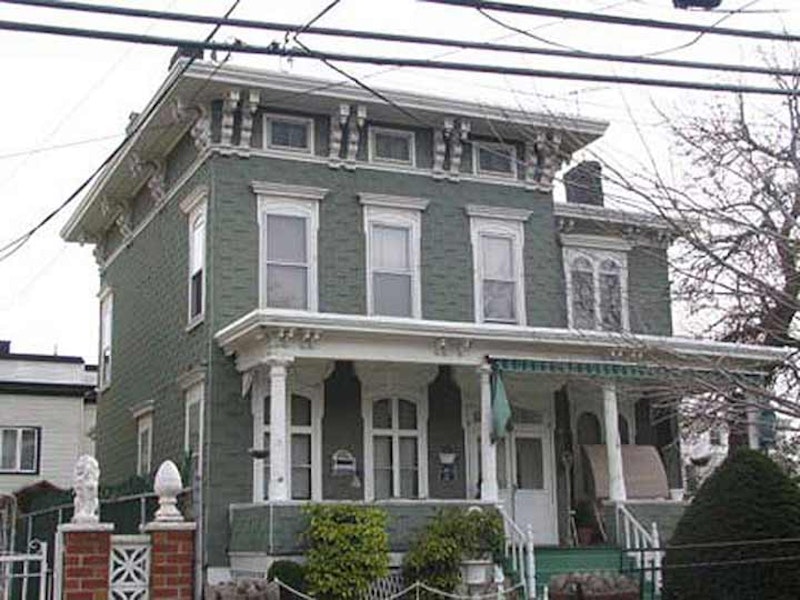 Queens has been a county since 1683 (just as the USA originally had 13 states, the state of New York has 12 original counties: Albany, Cornwall, Dukes, Dutchess, Kings (ultimately Brooklyn), New York (Manhattan), Orange, Richmond, Suffolk, Ulster and Westchester). Nassau County? In 1898, when four counties voted to become part of New York City, becoming Greater New York, half the county of Queens—the three easternmost towns of North Hempstead, Hempstead and Oyster Bay—chose to become independent and in 1899 created a county of their own, Nassau.

Western Queens, before 1870, consisted of three separate towns; Newtown, Flushing and Jamaica. That year, Long Island City seceded from Newtown and incorporated as a city. The towns were made up of villages, such as College Point and Richmond Hill, that are today mere neighborhoods. Twenty-eight years later, these three western Queens towns and one city were dissolved and were made contiguous with New York City.

Many today think of Long Island City and Astoria as the same place. In a way, they are, but Astoria’s only a part of what was once greater Long Island City, which consisted of today’s Astoria, Ravenswood, Hunters Point, Dutch Kills, Blissville and Sunnyside. At the top, I’m showing one of the many beautiful homes in Astoria Village, south of Astoria Park along the East River, that have been gradually disappearing over the years, as developers have their sights set for more modern (i.e. boring) housing. Astoria’s pedigree dates to the mid-1600s, when William Hallett received a grant for the area surrounding what is now Hallett’s Cove by New Netherland director general Peter Stuyvesant. However, the oldest structures in the region date to the mid-1800s, after fur merchant Stephen Ailing Halsey had incorporated the village in 1839.

Astoria was named for a man who apparently never set foot in it. A bitter battle for naming the village was finally named by supporters and friends of John Jacob Astor (1763-1848. Astor, entrepreneur and real estate tycoon, had become the wealthiest man in America by 1840 with a net worth of over $40 million). (As it turns out, Astor did live in “Astoria”—his summer home, built on what is now E. 87th St. near York Ave.—from which he could see the new Long Island Village named for him.) Wealthy businessmen built homes on what are now 12th and 14th Sts., some cozy Italianate boxes like the one in the photo, others large, ornate mansions; those that remain have been altered nearly beyond recognizability.

Hallett’s Cove, the region in Astoria just south of Astoria Park and west of 21st St., is today a mixture of breathtaking houses, ancient churches and graveyards, as well as forbidding, utilitarian housing projects and industrial buildings. The area near Astoria Park, as well as Ditmars to the north, feature views of the Hell Gate (1910) and Triborough (1936) bridges. It’s typical of the resolute non-development of New York City’s waterfront that the closer to the water you get, the more boring the housing gets.

Astoria built out away from the river, and today can be said to extend from the East River on the north and west south to 34th Ave. and east to 51st, Hobart and Hazen Sts. 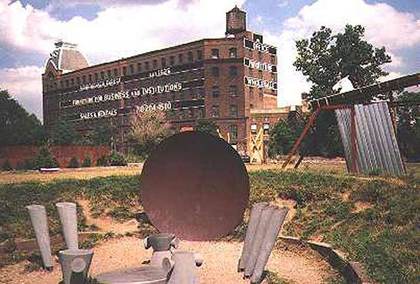 Ravenswood was first settled by the Dutch when Captain Francis Fyn acquired what would later be called Roosevelt Island and the strip of land facing it across the East River on Long Island in 1651. That island’s namesake for decades was Robert Blackwell; his mansion on Blackwell’s, now Roosevelt, Island still stands, and his son, Jacob, built an imposing dwelling on the East River at about today’s 37th Ave. in 1744 that was razed in 1901. A group of impressive mansions was arrayed on Vernon Blvd. (neé Ave.) in the mid-1800s, none of which remain today. The area came into its own as a residential area in the 19th century but only after NYC had bought up land in the 1840s and proceeded to build orphan asylums and smallpox hospitals. In 1845, angry Astorians burnt the smallpox hospital to the ground, and the asylums found a home on Blackwell’s Island.

Colonel George Gibbs had acquired waterfront property as early as 1814 and intended to create a private residential park. He died in 1833 without fully realizing his dream. It’s thought that around this time, the name Ravenswood was introduced by prominent clergyman Rev. Francis Hawks in honor of his friend, John Ravenscroft, the Episcopal bishop of North Carolina. After it was suggested to the reverend that the bishop might not want his name attached to so obscure a property, Hawks changed it to Ravenswood. Gibbs’ property was sold to developers in 1848 to four prominent NY investors, who quickly began to build it up. Over time, a street grid was built and Sunswick Creek, which ran through the area, was filled in (Sunswick likely derives from an Indian word meaning “chief’s wife’s place”). 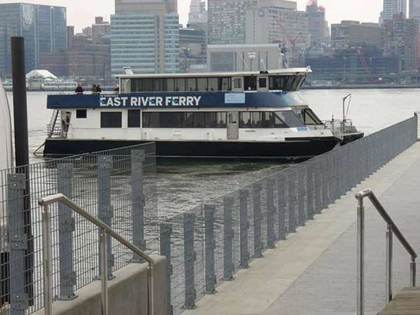 Hunters Point, which can be spelled with an apostrophe or without, is the southwest end of Long Island City, running from the East River to Sunnyside Yards and from 44th Dr. to the Newtown Creek. Dominie’s Hoek (Hook), originally the western end of the town of Newtown, was originally settled when a tract of land was awarded to Everard Bogardus, a Dutch Reformed minister (dominie), in 1643. The land was later owned by British sea captain George Hunter and by 1825 had become known as Hunter’s Point. It began the transition from rural farmland in the 1860s when the Long Island Rail Road built a terminal that would be its primary connection with Manhattan until the East River tunnels and Pennsylvania Station were built in 1910.

In 1870 Hunters Point was incorporated along with the villages of Astoria, Blissville, Ravenswood, Dutch Kills, Middletown, Sunnyside and Bowery Bay into Long Island City. Because it’s strategically located at the East River and Newtown Creek, the waterfronts of Hunters Point became heavily industrialized in the 19th and 20th centuries. De-industrialization in the 1970s and 1980s was swift and left many rusting and rotting remnants. Hunters Point is the most rapidly developing Queens neighborhood in the millennium, with numerous new housing projects and parks springing up. A proposed move of Amazon offices to the region a couple of years ago was stopped by local politicians. 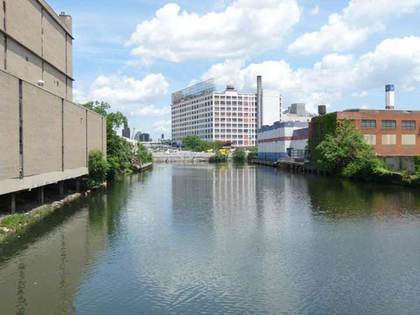 Dutch Kills, named for the Newtown Creek inlet, is concentrated near Queens Plaza and the west end of the massive Sunnyside railroad yards servicing Long Island Rail Road and Amtrak trains. In 2011 Dutch Kills began transitioning from mainly industrial to upscale residential, and several of its older treasures such as the old Long Island Star offices, where the long-lived newspaper was produced, have fallen to the wreckers. The term “kill” is derived from middle Dutch “kille” meaning “riverbed” or “channel.” A number of NYC bodies of water are called “kills” including Dutch Kill(s), English Kill(s), and the Arthur Kill and the Kill Van Kull between Staten Island and New Jersey. Dutch Kills and English Kills in the colonial era led to territory held by the Dutch and the British. 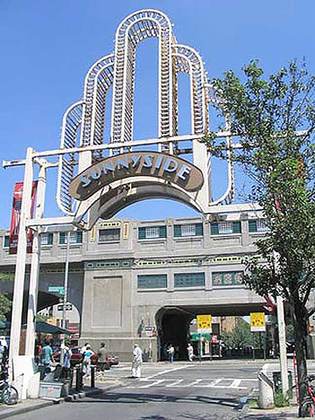 The Bragaw family, French Huguenot settlers who purchased the land from the Dutch in 1713, named their estate “Sunnyside Hill” because the property afforded them views of the sunrises and sunsets. Sunnyside Hill and other area farms were occupied by British forces during the Revolutionary War. It was the “Sunnyside Hotel,” built nearby, that started the development of present-day Sunnyside, Queens. Named after the adjacent farm, the hotel opened in the 1840s near what would be Webster and Jackson Aves. (now 37th Ave. and Northern Blvd.). Its clientele was mainly visitors to nearby cemeteries. From 1854 to 1866, it also catered to patrons of the National Race Course in Corona (renamed “Fashion Race Track” in 1856).

Sunnyside extends from the Sunnyside Railroad Yards along Skillman Ave. in the north to the Queens-Midtown Expressway in the south between 30th and about 58th Sts. Originally slower to develop than its immediate neighbors, Long Island City and Astoria, Sunnyside was transformed into a bustling residential neighborhood by the opening of the Queensboro Bridge and then the IRT Flushing Line along Queens Blvd. 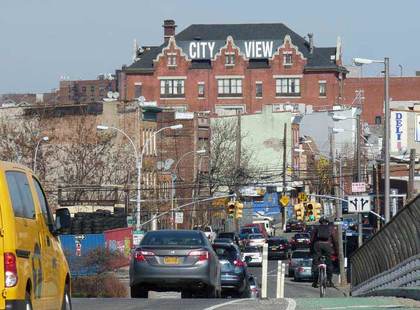 Blissville is the small wedge of Queens positioned between Newtown Creek, Calvary Cemetery and the Queens-Midtown Expressway; it takes its name from Neziah Bliss, inventor, shipbuilder and industrialist who owned most of the land in the 1830s and 1840s. Bliss, a protégé of Robert Fulton, was a steamboat pioneer and owned companies in Philadelphia and Cincinnati. Settling in Manhattan in 1827, his Novelty Iron Works supplied steamboat engines for area vessels. By 1832 he’d acquired acreage on both sides of Newtown Creek, in Greenpoint and what would become the southern edge of Long Island City. Bliss laid out streets in Greenpoint to facilitate the riverside shipbuilding concern and built a turnpike connecting it with Astoria; he also instituted ferry service with Manhattan. Though most of Bliss’ activities were in Greenpoint, he’s remembered chiefly by Blissville and by a stop on the Flushing Line subway (#7) that bears his family name; 46th St. was originally known as Bliss St.