In a city that’s mostly dominated by a strict checkerboard street grid, Doyers St. follows its own rules. 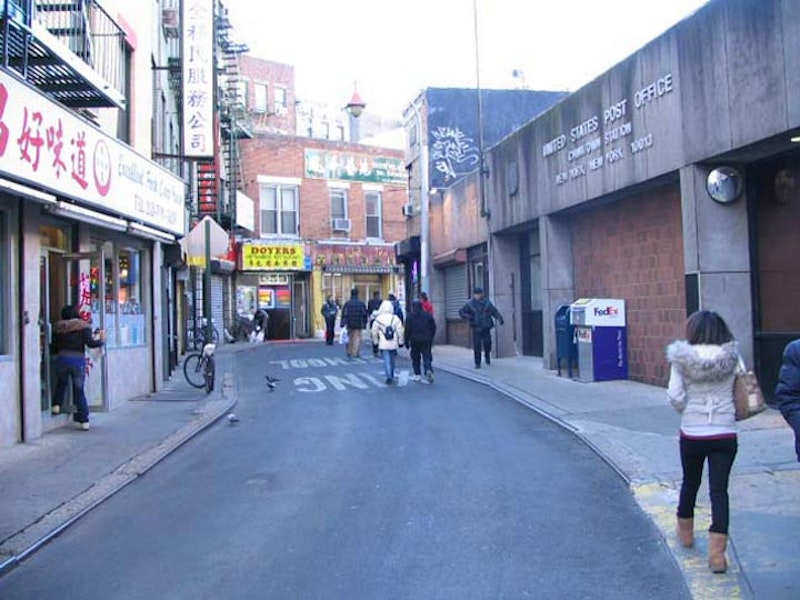 The heart of Chinatown, around Chatham Square at the confluence of the Bowery and E. Broadway, has a town plan all its own, with small streets that seemingly lead nowhere. Today, they’re chockablock with restaurants, barbers and shops that draw New Yorkers and tourists alike. But these small, curvy streets have a lurid history: Doyers St. was once nicknamed “The Bloody Angle” for its association with gang violence, and Mosco St. was corner of the infamous Five Points slum of the 19th and early-20th centuries.

In a city that’s mostly dominated by a strict checkerboard street grid, Doyers St. follows its own rules, wobbling on a curve between the Bowery and Pell St. In fact, there are three separate bends on Doyers St., with the Nom Wah Tea Parlor overlooking the most pronounced one. Doyers St. has its origins in the Dutch Colonial era, as it once served as the path to a distillery and tavern owned by an early settler named Doyer.

The late Henry Moscow, in The Street Book, and Sanna Feirstein, in Naming New York, disagree on Doyer’s identity, with Moscow calling him “Anthony Doyer” and Feirstein calling him “Hendrick,” but each agree he ran a tavern; Moscow provides an interesting tale about an Ah Quong, a resident at 3 Doyers St., digging in the basement for a $35 million fortune that Doyer had reportedly left there. He doesn’t mention if Ah Quong found anything.

In the late-19th century, Doyers St. was lined with taverns. Legendary Bowery figure Chuck Connors operated one; in another, there was a singing waiter named Izzy Baline, who wrote classics such as “Alexander’s Ragtime Band” and “God Bless America” as Irving Berlin.

After 1900, though, Doyers St. acquired the nickname “the Bloody Angle” as the gangs known as tongs appeared, controlling illegal gambling, opium distribution and political patronage, according to Luc Sante in his indispensable recounting of Bowery history, Low Life. Wars between the tongs raged on into the 20th century.

Today, Doyers St. is safer. The Nom Wah Tea Parlor is the doyenne of Doyers St. at No. 13, and has served mooncakes with tea, dim sum, dumplings, rice rolls, pork buns and egg rolls since 1920. Apotheke, at 9 Doyers St., is an intriguing cocktail lounge themed after the absinthe dens of 19th century-Paris, which features live music and burlesque events with dancers on the bar. Chinatown’s main post office is located at 6 Doyers St.

For years there was a tunnel connecting Doyers St. with Chatham Square, through which gangs or their victims would attempt escapes from violent scenes on Doyers. Though part of it was eliminated in the mid-2010s, the Chatham Square side of the tunnel reportedly still exists. It doesn’t look much like a tunnel—more like a fluorescent warren of cramped offices. 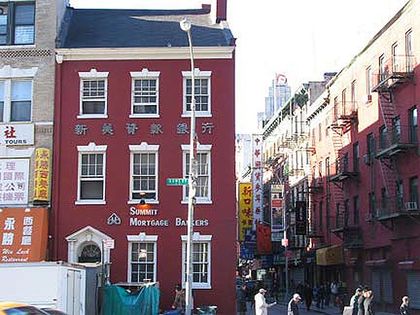 The Pell family owned vast territories in what’s now the northeastern Bronx but was part of Westchester in the colonial era. Thomas Pell’s mansion remains in Pelham Bay Park and is open to the public as a museum; numerous locales in New York named “Pelham” bear his name. Thomas’ nephew, John Pell, owned the land through which this street was built in 1776. The Edward Mooney House, on the southwest corner of Pell and the Bowery, is the oldest building in Chinatown, and one of the few remaining 18th century buildings in Manhattan, completed in 1789.

Joe’s Shanghai, at 9 Pell St., is the most popular restaurant on the block, and its spicy fare has become a NYC favorite. The restaurant was founded in Flushing in 1995 and expanded to two other locations. Owner and chef Joe Si opened Joe’s Ginger—which “combines the Western influences with traditional recipes”—at 25 Pell St. in 2004. 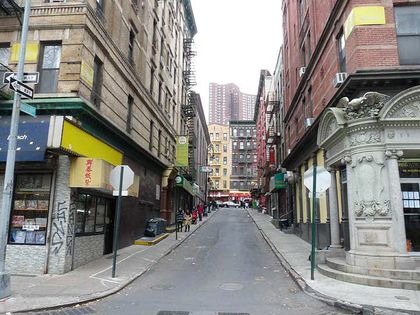 Mosco was once Park St. and before that, in the mid-1800s, Cross Street; either way, it cleaved through the heart of the Five Points. Old Hell’s Kitchen or the Bowery had nothing on the Five Points’ street gangs, cold-water tenements, and thieves’ dens. Read Sante’s Low Life or Tyler Anbinder’s Five Points to get the flavor. Much of the Five Points was razed to build courthouses and the new NYPD headquarters, as well as Columbus Park, and the slum was mostly eradicated by the mid-20th century. But Mosco St., essentially a large alley between Mulberry and Mott Sts., is there as a reminder.

In 1982, this remaining stretch was named for community activist Frank Mosco, who was associated with the Church of the Transfiguration on Mott St. and involved with youth outreach and lower-income housing and the elderly; he also organized the Two Bridges Little League.

The building at 28 Mulberry St., on the southeast corner (on the right in the photo), is currently the Wah Wing Sang Funeral Home, but the intricately carved eagle on the corner shows it was grander at one time. It’s the former Banca Italiana, which opened in 1888; it gained the eagle in 1911, when Columbus Park opened across the street, as owner Antonio Cuneo considered it an important occasion deserving of the addition.