Houdini’s campaign against Spiritualism resulted in Senate hearings on fraudulent mediums in 1926. 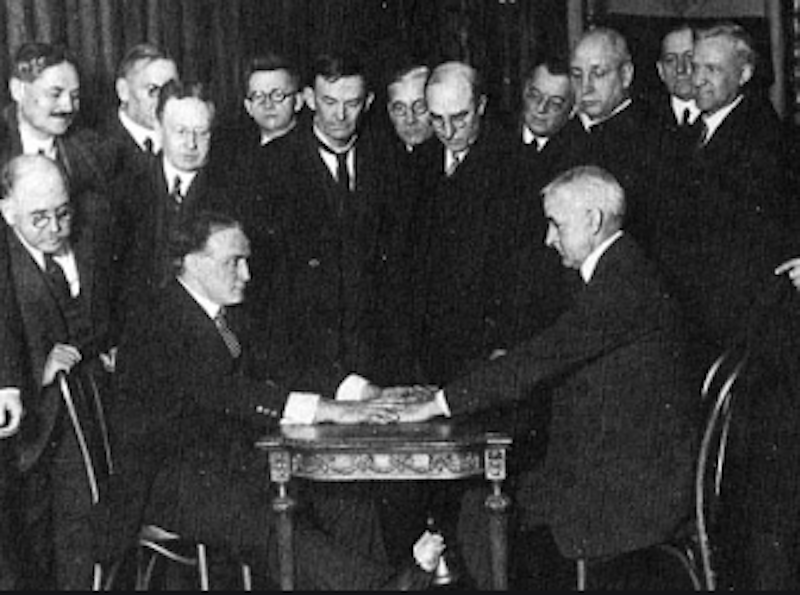 In 1913, Harry Houdini’s mother Cecilia Weiss died. He called her his “angel on earth” and he was overwhelmed with grief. He spent hours at the cemetery lying on her grave, talking to the earth. He always hoped there was life after death. If only there was a way to communicate with the dead.

Spiritualism peaked in the early-20th Century. This pseudo-religion postulated that departed souls communicate with the living. The process required the assistance of a medium, a person who can contact a spirit directly through séances or telepathic sessions. In Houdini’s early years as a struggling magician, he faked séance performances as a way to pay the bills. He wanted to believe in Spiritualism but he knew the tricks of the trade and wasn’t easily fooled.

Houdini was the most popular entertainer of his day. He was an escape artist, illusionist, magician and movie star. In 1920, he toured Britain and became friends with Arthur Conan Doyle, author of the Sherlock Holmes detective novels. Doyle’s books were worldwide bestsellers and he advanced rationalism as a means of understanding the world.

Surprisingly, Doyle was an avid believer in Spiritualism. His wife Jean (aka Lady Doyle) was a practicing Spiritualist medium. They conducted séances in their Sussex home through the intervention of a spirit guide named Phineas. The belief took hold after their son Kingsley was killed in World War I. Doyle believed he was able to contact his dead son six times and his dead brother twice. Doyle popularized the spiritualist cause by publicly advocating the practice and donating money to popular mediums.

During Houdini’s tour of England, he invited the Doyles to a performance at the Brighton Hippodrome. The next day, the Doyles invited Houdini and his wife Bess to lunch. Houdini performed magic tricks for the Doyle’s three children. Afterwards, the conversation turned to Spiritualism. Lady Doyle confessed she was able to contact dead relatives in séances. Houdini was skeptical but kept his doubts to himself. He asked Doyle to recommend a medium and said, “I promise to go there with my mind absolutely clear and willing to believe.”

Houdini visited Annie Brittain, the most famous medium in England. He experienced the same tricks he once utilized in his own fake séances: flickering candles, rocking chairs, the clanging of bells and doors opening and closing. Houdini came away unimpressed. Still, he and Doyle remained friends and exchanged polite letters.

In 1922, the Doyles visited New York. Houdini invited them to a banquet at the Society of American Magicians. He promised to demonstrate how a magician fakes Spiritualist phenomena. Doyle didn’t want to see Spiritualism mocked. “I look upon this subject as sacred,” he said. Houdini changed the performance. He borrowed Doyle’s dinner jacket and was bound and gagged and locked in a trunk. When the trunk was opened, Houdini’s wife was inside wearing Doyle’s jacket.

Doyle then took the stage. He showed the magicians a stop-motion film segment of dinosaurs walking a prehistoric landscape. The magicians, including Houdini, were awestruck. Doyle confessed the clip came from a film of his novel The Lost World.

On the evening of June 17, 1922 at a hotel in Atlantic City, Lady Doyle offered to help Houdini contact his dead mother. Houdini tried to remain objective. They sat at a table in a darkened room. Lady Doyle uttered strange sounds and began trembling. She reached for a notebook and transcribed 15 pages of automatic writing. She said the words were a message from Houdini’s mother. They included passages like: “I am happy. It’s so different over here, so much larger and more beautiful…all sweetness…nothing that hurts.”

Houdini was immediately suspicious. The message was written in English and his mother only spoke German. At the top of each page was a cross. His mother was the wife of a rabbi and devoutly Jewish. There’s no way she would’ve drawn a cross. Finally, the day of the séance was her birthday. Why didn’t she mention this?

Conan Doyle publicly proclaimed that Houdini was a Spiritualist believer. Houdini could no longer remain silent. He told the press that Spiritualism was a sham and its practitioners were fraudsters. A feud developed between the two celebrities. Conan Doyle wrote that Houdini “was a very conceited and self-opinionated man.” Houdini retaliated by writing “Doyle is a bit senile and easily bamboozled.”

Houdini began attending as many séances as possible. Often he wore disguises so he wouldn’t be recognized. The moment he witnessed a deceptive technique, he’d stand and proclaim, “I am Houdini and you are a fraud.” In 1924, Houdini wrote a book called A Magician Among the Spirits. He called fake mediums “human leeches” for exploiting people’s grief for money. He joined a committee formed by Scientific American magazine offering a reward to anyone who could authentically demonstrate a paranormal power.

A female medium named Margery Crandon managed to fool everyone on the committee except for Houdini. Her mystical trump card was her ability to manifest otherworldly ectoplasm from her mouth and vagina. Houdini identified the substance as dead animal tissue. He also discovered that the medium offered sexual favors to the Scientific American committee in exchange for a positive verdict of her paranormal talents.

Houdini’s campaign against Spiritualism resulted in Senate hearings on fraudulent mediums in 1926. Congress passed a bill outlawing fortune telling. Spiritualists were furious. Houdini said he received letters from Spiritualists predicting his “violent death as a fitting punishment for my nefarious work.”

In 1926, Houdini gave a performance at McGill University in Montreal. Before the show, a student named J. Gordon Whitehead went backstage. He wanted to test Houdini’s ability to withstand any blow to the stomach. Without warning, he sucker-punched Houdini five times before the magician could tighten his abdomen. Houdini felt severe pain but made it through the performance. He took a train to Detroit for more shows.

For the next two days, he had a 104-degree fever. A doctor diagnosed appendicitis and recommended immediate surgery. Houdini ignored him and performed a show at the Garrick Theater. During the performance he passed out but was revived and continued. After the show he was rushed to Detroit’s Grace Hospital. Doctors removed his appendix. It had ruptured and developed into peritonitis. On October 31, Houdini died with his wife and two brothers by his side. He was 52 years old.

Rumors arose that Spiritualists murdered Houdini. His crusade against the corrupt mediums had earned him plenty of enemies. In their book The Secret Life of Houdini, authors William Kalush and Larry Sloman argued that Spiritualists had a history of poisoning their foes. They said there was never any autopsy to confirm appendicitis and added, “If someone were hell-bent on poisoning Houdini, it wouldn’t have been very difficult.”

Conan Doyle told reporters he and his wife were not surprised by Houdini’s death. They said that on the night of the Atlantic City séance, Houdini’s mother actually predicted her son would die young. “We did not pass the message onto him as we hoped it might prove mistaken, but that hope has now been dissipated.”

For the next 10 years on Halloween, Houdini’s wife Bess organized a séance to contact her husband’s spirit. She and Houdini had agreed on a secret code he would impart to her after his death. None of the séance mediums ever cracked that code.