Eclipse of an Empire 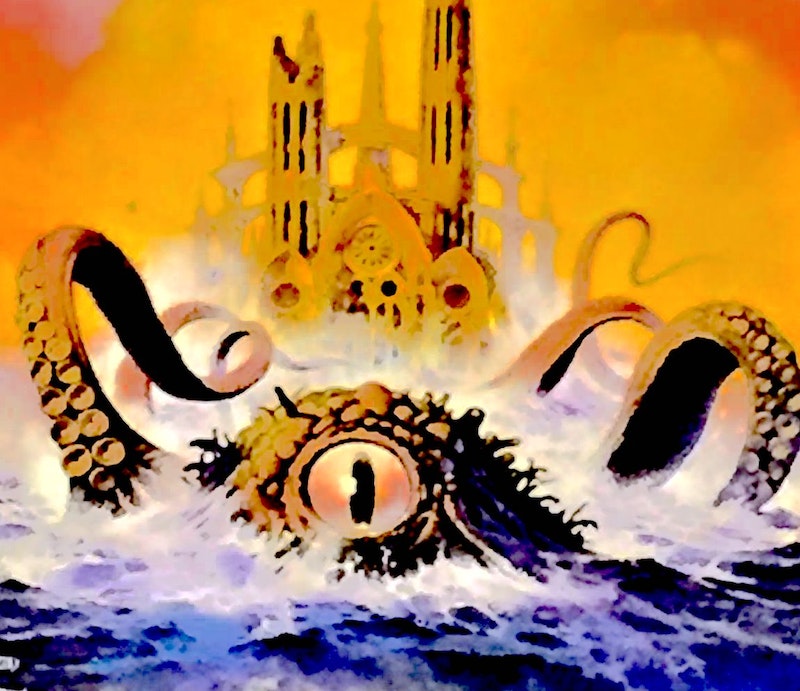 Emperor Tragzoomp, ruler of the Reptosquid Dominion, waved his truncated tentacles in fury. It was unmistakable on his viewscreen: the Dragdaghs were gaining ground, their noxious plumes turning previously maroon landscapes a hideous cerulean. Reptosquids across the planet were in jeopardy, which mattered solely because they were needed by Tragzoomp.

The Dragdagh leader, Bragdink, had been in cryogenic stasis, awaiting ejection into the Great Void, when the D-masses suddenly retrieved him. Bragdink had spouted high-pitched gibberish as he re-emerged from the vat, but now his quiet demeanor suggested a restored lucidity. The populace was flocking to him, the Megalopians in their towers of course, but also the Suboids of the Inner Rings. Only in the Outer Stretches did the Reptosquids retain dominance.

Tragzoomp moved his scaly face closer to the Orb. He was Master of the Inter-Neural Network, able to project his emanations directly into the synapses of denizens across the planet. The emperor sniffled through his neck slits before blasting his message: “I AM TRAGZOOMP!” Such content could be expected to impress a portion of the population, the effect amplified by nanobots and synthetic avatars from outside the Dominion.

The W-particle Plague was now running rampant even in surface crevices previously untouched. The cowards who wore radiation shielding were undermining confidence in the markets for tritium and deuterium. His brave supporters who angrily exposed their organs to the scathing particles deserved praise, but it was no longer possible to have an outburst of violent rage in public without risking the job loss and humiliation of the Instant Cancellation.

The Emperor glanced out the window. One star had set, the other would not be far behind. A single shadow stretched from each of the distant Obelisks. Here was one hope for his continuation in power. Angry malcontents had been eating away at the Obelisks, toppling some of these tributes to the Reptosquid ancestors. Tragzoomp turned back to the Orb and unleashed one of his fiercest electrochemical effusions: “OBELISKS! OBBBELLLLIIISSSKKKKSSSS!”

He could sense psychosocial vibrations across the planet’s surface as the population writhed in tormented or orgiastic response to his mental thrusts. But what if ratings were low? For Tragzoomp, there was no deeper disgrace, no greater terror. Even the prospect of losing his Imperial Immunity to All Law, Regulation and Norms paled beside the thought that fewer and fewer denizens of the solar system were listening, that the Great Audience was slipping away.

Tragzoomp glowered at the viewscreen. The damnable ex-Reptosquids were to blame for so much of his travails. He’d mocked them, scorned them as nobodies, ethereal non-entities indistinguishable from the repellent emissions of an outgassing moon. But still they attacked, their emanations spreading across the networks, their negative-energy projectiles taunting him.

He’d shrugged off the massive scroll produced by his bush-faced former security coordinator. That loser had had his chance, to testify in the House of Sevitatneserpers. But he’d waited for the Council of Etanes, where no pretense of objective reality was maintained. Yet now a greater threat was emerging: a new scroll from within the Emperor’s own family—from a female, no less. What arrogance that she had simply ripped off the rubbery Gag Order.

The Emperor was glum. Things were not going his way. But there was consolation in knowing that within his tentacle’s reach he’d enough Laser Power to erase all life from the planet.