These would-be hipsters are as prevalent as overpriced coffeehouses and “friends” on the Internet. 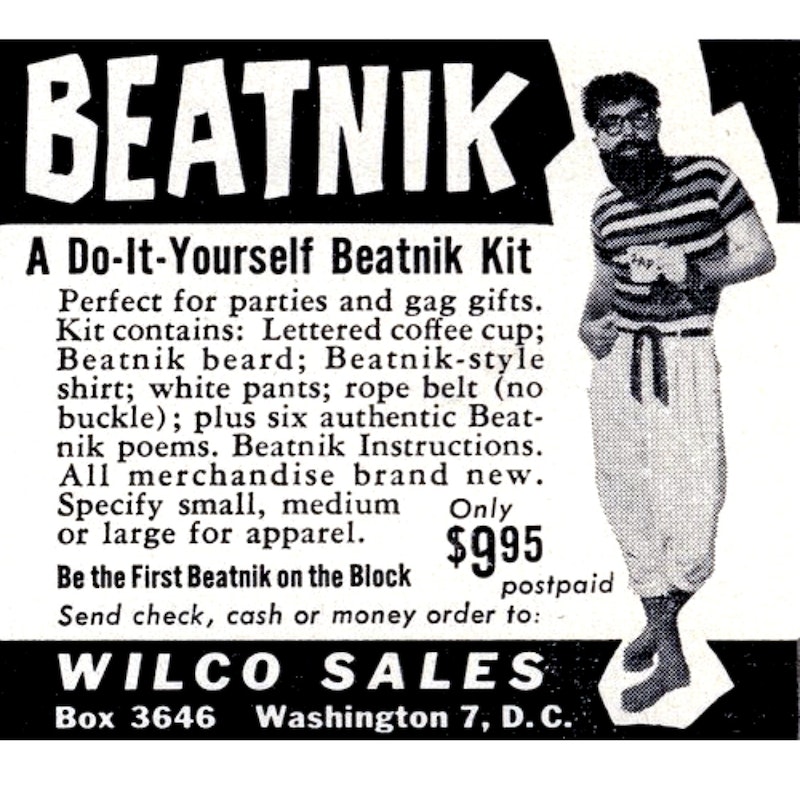 The first time I saw anything remotely considered Beat was the stereotypical “beatnik” character Maynard G. Krebs, played by Bob Denver. He was the comic relief on the early-1960s sitcom Dobie Gillis. It premiered over a half century ago when our love of the televised world was a fuzzy black and white, small curved glass screen and rabbit ear antennae with aluminum foil flags wrapped at the metallic tips resembled something like Martian flags planted by space aliens.

Maynard G. Krebs’ character was different then any other weirdo. The caricature of a young man with a goatee wearing sunglasses, sporting a turtleneck and beating on bongo drums while speaking in a bebop lingo was far from the norm. These would-be hipsters are as prevalent as overpriced coffeehouses and “friends” on the Internet. The beatnik ideal quickly became fodder for cheap shot comedy and made for bad jokes at cocktail parties. Like the “dirty hippies” that succeeded them, beatniks were an unfashionable faux pas. A girl wearing a beret, a scarf and a pair of black tights, smoking a joint, was the uptight square’s idea of decadence.

The beatnik stigma started in the 1950s with McCarthyism and the Cold War. Disenchanted young people saw the effects of the almighty American war machine. The death and destruction perpetrated by a questionably “free” nation. It was the discrimination of its people by segregation and bigotry. A white, blueblood ruling class that lied, cheated and murdered its way to untold riches, keeping the populous down to maintain stranglehold power. World wars and the Korean conflict loomed large over the “duck and cover” air raid drills in schools where kids dived and crouched under desks to practice being vaporized in the event of a nuclear blast. Backyard fallout shelters were built across the country. Every Monday at one o’clock the civil defense sirens blast a warning test to let everyone know they were held safe and secure in democracy’s plump bosom.

Reality was different. The Beat Generation grew up and out of this collective dissatisfaction of the American way and social dissent of government authority. The anti-establishment literary movement, which spawned a generation, began with a handful of anti-social misfits. Homosexuals, ex-cons and drug addicts formed an alliance through poetry, art and literary endeavors. It was an unlikely alliance of free thinkers traveling on the bumpy road in search of something intangible. This utopian delusion grew and flourished into the 1960s hippie culture, rejecting the status quo’s capitalist lifestyle. A “buy now pay later” mentality that created the mess we’re in today.

The social disorder prevails. By the 1970s it was rendered harmless and neutered as another antiseptic pop culture fad. Its roots can be traced back further to writers and poets that stood alone in a world of increasing insanity. Poets and artists held a reverence for the multitude of art movements—the Impressionists, Dada, Surrealism, Abstract Expressionists and beyond. Art played in concert with literature and music. Jazz was the driving force behind much of the Beat Generations literary subculture as much as rap, rock and punk music plays a major role in today’s alternative cultural reality.

A Buddhist vibe and a Zen mindset combine with a rejection of the old forms. Archaic societal belief systems that stifle free thinking created rebellions in culture, a foment that ripples from then to now in movements like Antifa, Black Lives Matter, Students for a Democratic Society, Black Panthers, and other anarchist factions of the radical Left. You can label it anyway you wish, but it can’t be defined so easily. Beat is a state of mind not affiliated with political or religious factions. Beat is in a league of its own without a team or leaders to follow. The term “beatnik” was invented and coined by newspaper reporter Herb Caen in 1958. It was a tongue-in-cheek attempt to cheapen and make light of a cultural revolution that many in the moral majority establishment saw as athreat. Life magazine ran a multi-page story depicting beatniks as an alternative lifestyle popular in New York City and San Francisco, headlined “The Only Rebellion Around.” It was true back then but now it’s grown and matured into a revolution that’s slowly changing our worldview. Peeling away the oppressive layers of lies and deception that built America. Question everything and follow your heart.