The Antonio Brown-Patriots Problem Was Avoidable

The chances of Brown playing in another NFL game are virtually zero. 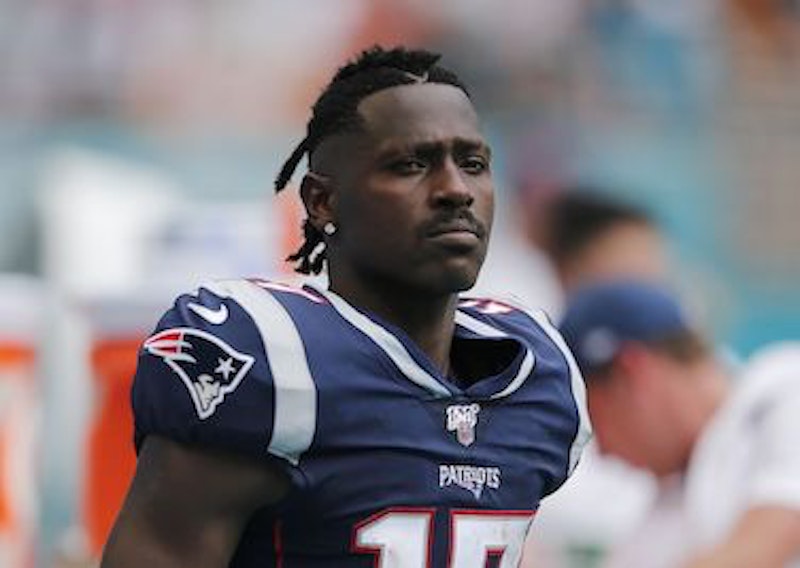 The New England Patriots finally woke up and released troubled wide receiver Antonio Brown last Friday afternoon, becoming the second team to do that this season. Clearly frustrated, Brown tweeted out Sunday, "Will not be playing in the @NFL anymore these owners can cancel deals do whatever they want at anytime we will see if the @NFLPA hold them accountable sad they can just void guarantees anytime going on 40m 2 months will see if they pay up!"

This is because the Patriots lucked out and will likely not have to pay him the $9 million signing bonus part of his contract. They signed him to a one-year $15 million deal after the Oakland Raiders released him. That deal lasted 11 days because allegations of Brown sexually assaulting women came to light—and Brown went ahead and sent threatening messages to one of the women who made the allegations; one was a former Pittsburgh Steelers trainer and another was an artist he hired to paint a mural in his home in 2017.

It was idiotic of the Patriots to sign Brown in the first place. Consider the reason why his Raiders tenure came to a premature finish. He missed two practices unexcused during the 2019 preseason, was fined and this resulted in a screaming match with him and Raiders general manager Mike Mayock at practice earlier this month. Brown threatened to punch Mayock in the face during the dispute, so the team removed the guaranteed money from his contract and slapped him with a massive fine. Brown then demanded his release, a request the Raiders granted before he ever played in a single game for them; this allowed them to void the three-year $30 million contract he had with the team.

Brown's behavior with the Raiders was unacceptable and teams across the league knew it. The Patriots knew his release had nothing to do with his talent. He made 104 catches for 1297 yards and 15 touchdown passes last season. His release was about his character and specifically, his atrocious behavior in the workplace. No one in a working relationship should be threatening violence over the other person be it the employer to the employee or vice versa.

However, when the Patriots made the move and signed Brown, they decided none of that mattered. They put winning over everything else because they thought he’d be an asset. In that, they were correct. But then again, they've outscored their opponents 106-17 through the first three games of the regular season, so they didn’t need him. Brown played in one 43-0 blowout win over the Miami Dolphins—not that his performance made any difference in the contest.

Clearly frustrated with the situation, Patriots head coach Bill Belichick, who serves as the team's general manager as well, decided he wouldn’t take any questions related to Brown in multiple press conferences while Brown was a member of the team. This resulted in Belichick, known for his non-answers in press conferences, walking out of one last Friday when pressed on Brown; hours later, the team released Brown. It was a case where the Boston media did their job and deserve credit. Had they not frustrated the organization, Brown still might be a part of the team even after attempting to intimidate one of his accusers.

Although the American court system gives one the presumption of innocence, it’d be strange for someone to do that had they not done anything wrong. As of the Friday morning following that revelation (September 20), the Patriots hadn’t released Brown yet. While many may chastise the media for being “hard” on Belichick and the Patriots, they have a job to do—and it’s not acting as the team’s PR firm. That’s why Patriots.com has its own website and reporters. If one read the Patriots.com report on the Brown release and had no prior knowledge of the Brown debacle, they’d be confused as to why the team released him—since no explanation is given. In 2019 media, the objective usually involves chasing page views and clearly, the Brown situation interested readers, listeners and viewers more than the upcoming games against weak AFC East opponents.

There’s debate over how much money the Patriots will end up paying Brown, but it likely won’t be as much money as he wanted. September 23 was when Brown would’ve received the first installment of his signing bonus, $5 million of the $9 million, had the Patriots kept him. His contract also included a $1 million base salary guaranteed, and it’s unclear if he earned that.

Sports Illustrated calculates the Patriots will only end up paying Brown $283,333 ($125,000 of his base salary, $33,333 for being on the roster for one game and $125,000 in termination pay, per the NFLPA’s labor deal). Still, it appears likely Brown will file some sort of a grievance lawsuit against the Patriots. After all, he blew a three-year $30 million deal with the Raiders earlier this year, so he’s clearly upset about finances.

Brown’s loss of this guaranteed money is his own fault. If the Patriots have to pay Brown anything more than they have already, that’s their fault as well. They never should’ve signed him. The team is lucky they got out of the deal prior to paying Brown millions of dollars. Brown’s agent stated there are multiple teams interested in signing his client. If by some unlikely scenario some team bites, good luck to them; they deserve any flack they receive and to lose any money he screws them out of.