Unless you’re cremated, somewhere, there’s a casket destined to take you underground. 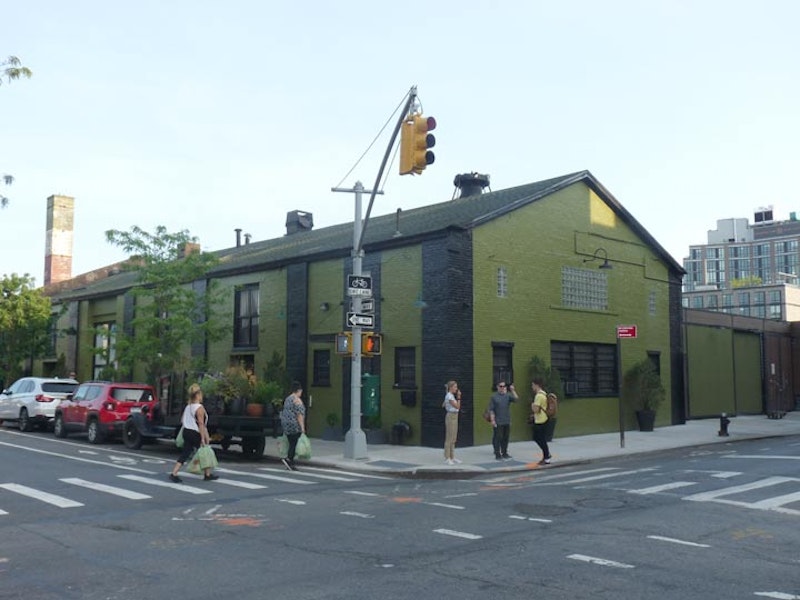 New York is full of Unions— not only labor unions, but also streets and squares called Union. While Manhattan’s Union Square was named in the 19th Century for the encounter of Broadway and Bowery Rd. (now 4th Ave.), the lengthy routes Union Ave. and Union St. in Brooklyn, Union St. and Turnpike in Queens, and Union Ave. in the Bronx are so called for an honorific for the United States of America not often used these days… the “Union.”

Today’s walk took me down Brooklyn’s Union St. from the area surrounding the Gowanus Canal to Prospect Park, which interrupts its eastbound progress for several blocks. Union St. resumes again at Washington Ave., proceeding through Crown Heights to Rochester Ave., and then, unusually, continues again in a north-south direction from East New York Ave. to E. 98th in Brownsville.

At Bond St. and Union is a lengthy, two-story slope-roofed building painted green, and the small sign on the door simply calls it “The Green Building.” However, The Green Building’s website says: it was built in 1889 and was a brass foundry until 1987. Its present occupant is as an event space for commercial shoots, films, dance and theater performances, and corporate events. The real estate Brownstoner claims the building dates only to 1931, so there’s quite a discrepancy about its construction date. 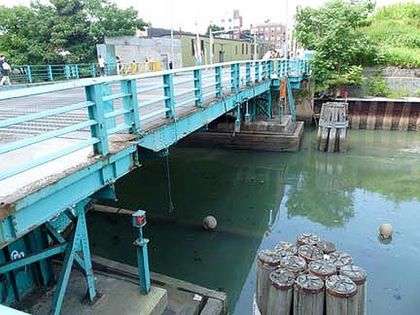 The Union Street Drawbridge, the northernmost of the five vehicular bridges that cross Gowanus Canal, is classified by the Department of Transportation as a double-leaf Scherzer rolling leaf bascule bridge. It’s 109 feet long, 56 feet wide and first opened March 4, 1905. The bridge is rickety and fragile—it’s under repair in 2019, and I hope not at the cost of its creaky charm. Its twin bridge, the 3rd St. over the Gowanus, opened a few weeks later in 1905. This bridge loses out a little in Brooklyn lore to the Carroll Street Bridge, a rare retractile bridge that dates to 1889. 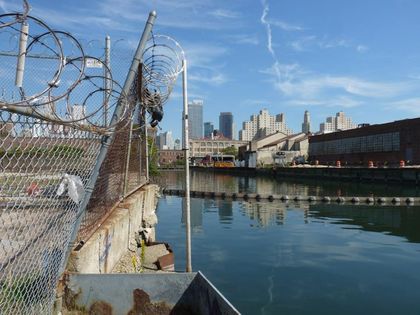 It’s hard to imagine it, as the Gowanus Canal hasn’t been a fresh creek for about a century and a half, but it was originally a natural inlet from Upper New York Bay that seeped into what was South Brooklyn and is now Cobble Hill, with narrow tributaries and rivulets that fingered their way into surrounding areas. That all changed when developer Edwin Litchfield formed the Brooklyn Improvement Company in the 1850s, charged with the task of dredging the creek, straightening it and making it navigable as a canal for, at first, tall mast sailing ships, and later ironclad industrial vessels.

With the creation of the new waterway, barges brought in sandstone from New Jersey that were used to build the beautiful brownstones that today still line the streets of surrounding Boerum Hill and Park Slope. Unfortunately, the buildup of the area contributed to the pollution of the canal, which would go on for over a century: the surrounding area’s raw sewage was pumped directly into the canal, and the new gasworks, coal yards and soap factories along the canal’s length also dropped tons of pollutants directly into it as the years went by. As early as the 1880s the canal was foul and miasmic and its color had changed to a dark Pepto-Bismol shade, prompting locals to call it “Lavender Lake.”

In the 2000s, the flush pump (which was first built in the 1910s) was repaired and the Canal began to become somewhat cleaner and clearer, with some wildlife returning to it, but by 2011 the pump was broken again and the Canal had reverted to its fetid state. Though the pump is working again, it will be a major undertaking to make the water clean and that work will take decades. Nevertheless, local developers are charging ahead and new apartment houses have sprung up along the waterway, with a new waterfront walkway appearing between Carroll and 2nd Sts. In other spots, though, it retains its old barbed-wire charm. 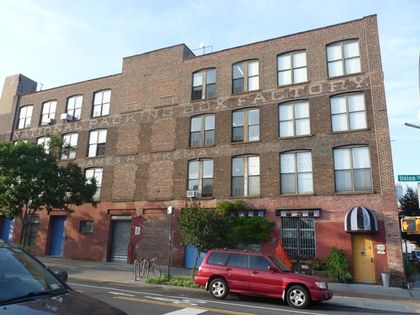 James H. Dykeman’s box factory occupied this building on Union St. in Carroll Gardens. Dykeman “was a carpenter by trade who established himself in the box business in 1877,” according to The Disston Crucible, a Magazine for Millmen. “Two large buildings occupy the whole block at Union, Nevins, and Sackett Streets, the fourth side of the property facing the canal, making it possible to bring lumber to the mill.

The building is now occupied by a number of small companies. The original painted lettering on the building exterior has survived surprisingly well. 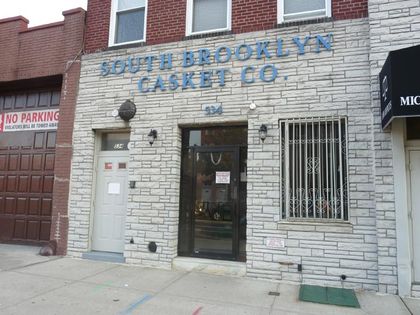 On Union St. there’s a sort of subgenre of the funerary industry. The caskets have to come from somewhere—I’m glad Brooklyn has casket manufacturers (I saw a faded painted ad for another one on Rockwell Pl., but that one had long vanished). During one of my interregnums between jobs—they come frequently—I scored a temp job typesetting those glossy prayer cards that you get at wakes. I didn’t find it fulfilling and left after a short time. That was on Union St. by the canal, too. 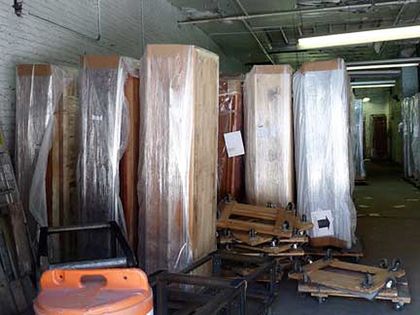 The South Brooklyn Casket Company (Carroll Gardens, Cobble Hill and Red Hook were once collectively known as South Brooklyn) was founded in 1931 by Thomas Pontone. If you stroll past at the right time, you’ll see the wrapped up caskets ready for shipping. Unless you’re cremated, somewhere, there’s a casket destined to take you underground.