How to Suck Less at Surfing

Listen to your 14-year-old, and donuts are okay. 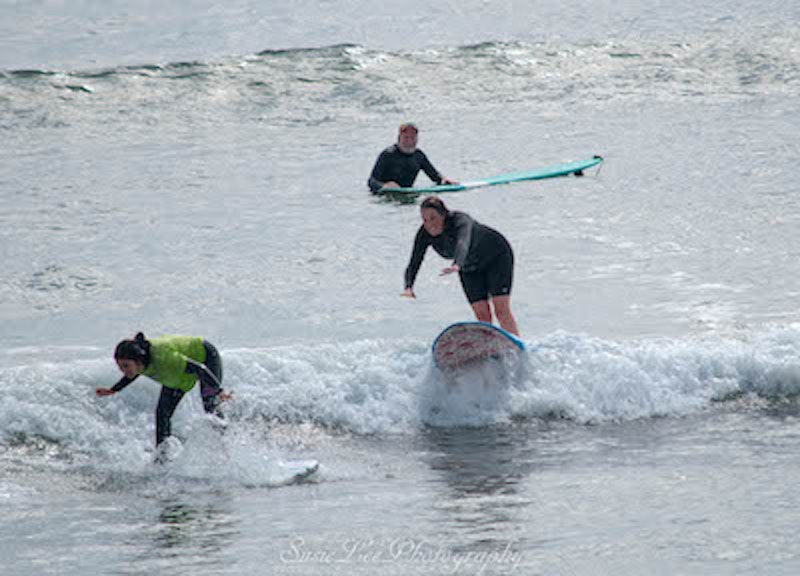 I just got back from a trip to California where I’m grateful to visit the Santa Barbara Sea Glass Festival each year. For the past three years I’ve also been “surfing” with friends in nearby Ventura. The first year I wiped out on probably 50 waves and made it up to standing on a miraculous one wave, repeating that ratio last year, even after training harder at home on “core strength” to which I had attributed my relative failure the first time around.

Last year I did burpees and pull-ups to get more “in shape” and didn’t do any better, probably a little worse. I’d brought three of my kids and was having so much fun watching them surf I didn’t really care about getting up on the board myself, especially given how little talent I have at the sport. I’d resigned myself, never an athlete, to just being terrible. Over the winter I was in a car accident that affected my head, neck and shoulders and I thought, forget it, this year I’ll never make it up on the board.

I turned 50 in May, had put on a little weight since last year, and received the funny, inspirational book It's Great to Suck at Something: The Unexpected Joy of Wiping Out and What It Can Teach Us About Patience, Resilience, and the Stuff that Really Matters

(about, appropriately, surfing, as a birthday gift):

“Once, I actually cried tears of joy over what any observer would have thought a so-so performance on a so-so wave. Yes, I was moved to tears by mediocrity. So why continue? Why pursue something I’ll never be good at? Because it’s great to suck at something.”—Karen Rinaldi, New York Times.

Because I’d decided that I’d probably fail, I didn’t try that hard in advance of the trip this year. I did pool laps, and since I’m a kayaker I knew I had the arm strength required of the tons of paddling out there, but didn’t spend a lot of time doing the burpees I should’ve to be ready to pop up on the board, and didn’t do as much cardio as I should’ve either.

For fuck’s sake I stopped at the donut shop on my way to the beach that morning and ate a giant jelly donut with my friend the pro in-shape surfer right before I jammed myself into a wetsuit and went out to the water. I’ll always choose carbs and sugar first.

I decided I needed more mental than physical preparation. I was overthinking surfing, stressing myself out. Having read the book where I got permission to suck was great, but I was putting a lot of pressure on myself to make it up on one wave. The night before I flew out, I asked my son, who had turned 13 on the surfing beach the year before, making his first time surfing look completely effortless, if he could give me one piece of advice to help me. “Let the wave do the work and pick you up,” he said. “Stop trying so hard to think about everything.”

Next up I was able to seek advice at the sea glass festival before I headed to Ventura from legendary bodyboarder Pat Caldwell, who’s married to one of the sea glass jewelers, JJ of Kaipua Designs. Pat advised me to “pick my head up” and look at the horizon, pointing out that a lot of new surfers often look down, throwing off balance.

Lack of burpee core muscles and jelly donut on board, I ignored a morning warning that there were Great White Sharks in the water—I said if one was gonna come for me it better be a big one because I didn’t want one nibbling and fucking me up. I headed out for a morning set of waves, wrecking every one, coming in exhausted and feeling like I was done for the day, probably forever. But I drank some water and ate some chicken salad on Doritos, and set out again with my “Surfing Miyagi” which is what I call the local legend RT, married to my friend SurferSusie. One more try, I thought, already covered in bruises and skin rash on my feet and knees.

Surfing Miyagi joked around, showed me how to paddle shallow better with cupped hands, told me how to release the tension in my body and chill on the board to keep it balanced better, and then he sent me out. I thought about what my son said, about what Pat had said, about fuck the burpees and that pop-up move, I’m just gonna stand up, let the wave do the work, looked up at the gorgeous California mountains, and just did it, like it was no big deal. I cried for joy.

I kooked it, almost mowed down a little kid one time because I can’t steer for shit. I’ll never be any kind of pro (I live on the wrong coast to practice!) or even a halfway decent amateur. But for the first time, I got it.  For the first time, I wanted to go back because I wasn’t scared. I could’ve paddled back out 1000 times. Sucking doesn’t suck.