That Idiot Nearly Lost My Book on the Subway

It's important to know someone is on one side of the loser line and you're on the other. 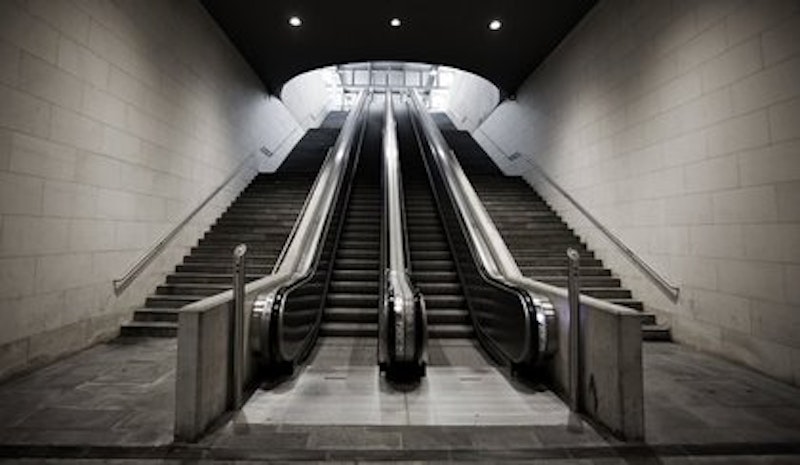 My friend Marvin is an idiot. He's a mouthy, intelligent man, a good talker if you have the time. But he's discombobulated and to trust him is to court disaster. He's a loser, one might say. We're friends because we hang out in the same cafes, which isn't really a bond. But knowing him has taught me this: he's an idiot and I'm not. That's important to me. It's always important to know that one person is on one side of the loser line and you're on the other. Of course, when cafe sitting is a big part of your life, detecting this line can become a fine matter. You have to look for small landmarks in order to place it.

Like this: Marvin nearly lost my book on the subway. I'd loaned it to him, and he put the book down on a turnstile while slogging his way to a dentist appointment at noon. Why did he put the book on the turnstile? Because his ticket for the subway turned out to be no good. It had been used already and he had to buy a new one, but he didn't have any money in his pocket, just in his book bag. That was because he's always wearing the same nylon exercise pants and now their pocket zippers have become gnarled and difficult to work. His book bag zippers are just fine. So he plumped his book bag on the turnstile and began searching. I suppose he pushed my book a bit to the side to give himself room.

The new ticket that he bought turned out to be odd and futuristic. You didn't insert it; you laid it against a magic rectangle on the turnstile's top surface—not far from my book, possibly. The nice lady on the other side of the window had to smile and motion him through the process. She was a lean Québecois lady in middle age, and Marvin reflected on how 10 years ago she must’ve been so pretty and how she had kept the sort of tough, weathered good will and sunniness found in Québecois ladies no matter how their faces and bodies dry up.

He took an escalator that was canted sharply downward, like a drunk aiming his nose at the floor. Then he took a second escalator, a longer one; it was canted just as sharply but aimed at a far more distant floor, one located near the earth's center. Then he arrived at his proper level of the cavern and walked the 15 yards to his platform. The train pulled in. He patted his hoody's front pocket, or pouch, where supposedly he had parked my book. No good. He patted his book bag, trying to feel the book's outlines against the grand boxiness of his oversized laptop, which he lugs like a peasant from cafe to cafe. The news broke on him, and his voice achieved a modulation heard in The Fly. “Fuck me,” he whined. “Oh shit. Fuck meeeee.” He would have to travel back up the escalators, journey to the distant booth where the lady sold tickets. He was going to be late for the dentist.

Worse, he’d been whining “Oh shit” and “Fuck meeeee” just a few minutes before. He knew that; he'd heard himself. Because his episode with the used ticket hadn't come at the start of his subway trip, it had come near the end. He'd been on schedule and then he piled off the subway one stop ahead of his station. He'd been following the crowd and hadn't looked past their heads to try to find the stop's name painted on the wall. Once he was past the exit he discovered the wrong street waiting for him. He asked what station it was and a man told him. “Oh fuck,” Marvin groaned, speed-walking to the turnstiles.

Then came the discovery of the used ticket and “Oh shit” and “Fuck meeeee.” Because he knew he had been carrying three tickets, all tucked inside my book. Two of them were used: the one that had got him on the train and one that held his place in my book. But the third ticket was new, ready to go. It should’ve been there but wasn't. My book had struck him as a straightforward and sensible place to carry three little rectangles of cardboard. I can't say he was wrong. But the ticket had fallen out.

Traveling up the long escalator and then remembering he still had the short one after that, Marvin reflected that he was always late to his dentist's office and they considered him a goof. He also reflected that he knew the book would still be there. He was confident that nobody would take it or knock it to the ground and pass atop it. He had no data to back his confidence, since miraculously he had never left a book on the subway before. Yet he was sure. His mind couldn't cope with any other possibility.

He came within sight of the ticket booth where the blonde lady was stationed. She had the door to her booth open and was leaning through it to talk gaily with another weathered, smiling woman. The second woman waved goodbye and the blonde lady disappeared into her compartment. The door closed and she did not reappear at the ticket window. Marvin was perhaps 10 feet from the booth when this happened. He saw the book lying safely next to the woman's swivel chair, and at that moment he saw her disappear into the compartment's depths.

He waited perhaps five seconds, and then he rapped on the door. He didn't bang, but he rapped, a neat tattoo, and then he repeated the tattoo and this time made it louder. The blonde lady reappeared, a tight smile on her lips. “Et voilà,” she said trimly, opening the door and handing him the book. “Thank you,” Marvin said, but it was too late to convince anyone he was polite, even himself.

He went back down the short escalator and the long escalator. He waited for his train and waited some more. The train appeared.

One stop on and he was traveling up another mile-long escalator and its little brother. Outside he found the right street waiting for him and a few minutes later he was dragging his book bag and mammoth laptop into the dentist's office.

“Marvin,” the receptionist told him, “your appointment was for 12. It's twelve thir—” She stopped.

“It's 12:17,” the dentist said, and Marvin was relieved that he wasn't half an hour late. But the dentist kept on. “I'm sorry,” he said. “The next patient is here.” He disappeared into the room where the dentist chair was.

“You're going to have to reschedule,” said the receptionist. “Is tomorrow good?”

Marvin didn't want to come back, but knew he had to. He couldn't let a tooth continue with a corroded, useless bond, which is what the dentist was going to correct. “I don't know,” he said to the receptionist, and he sat down heavily. He was going to think. He looked ahead and said nothing. By the time he had consented to another appointment (next week sometime, she gave him a card) he had not moved his gaze from the section of carpet where he had parked it. His voice didn't rise or fall, no modulation. He spoke as a cinder would speak; that's how he felt and he just wasn't going to do better. They might have charged him for the missed appointment, but they wouldn't. Even so he answered the receptionist in a monotone.

That was the story. He had nearly lost my book and had been borderline rude to a pair of blameless people.

“My place,” he said, still sounding sullen and disgusted. He added, “It 's not your book. It's from the library.”

“He's such an idiot,” I told my mother, recounting the whole story because Marvin often gets on my nerves. “If he lost it that would’ve been 30 or 40 dollars. They have fines like crazy. You can't just lose a library book.”

“A library book?” my mother said. “The whole time you were talking I thought it was one of yours. Why did you lend him a library book?”

I hadn't thought of that and didn't have an answer. “He's such an idiot,” I said.