I Used to Hang with Ray Manzarek

Fiction: Life among the famous. 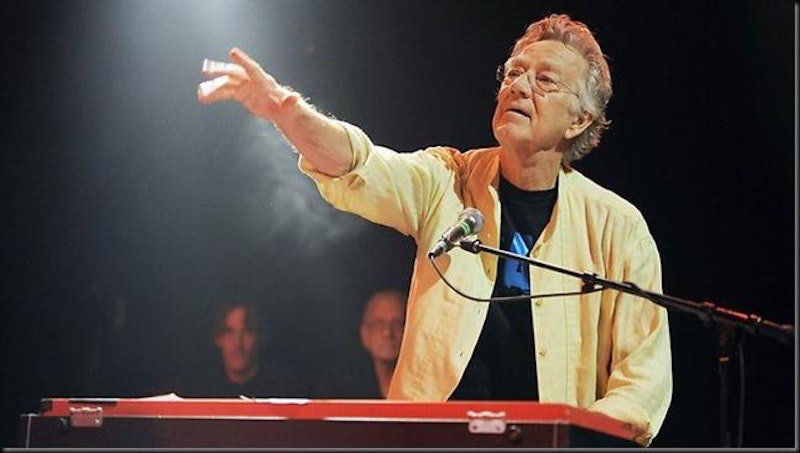 I used to hang with Ray Manzarek. His place was great. It was tasteful and you could see down the slopes a good way; downtown and the freeways looked really small, white in the distance. His girlfriend—I think it was—well, wife, girlfriend, she decorated the place and it had a good look. Lots of low little tables made of polished wood. Simone, I think it was—Nathalie. They got married.

He had a wall of stereo equipment, like you were looking at a mountain face of chrome. From Germany. Three walls of LPs, because I think this was before CDs. I was really impressed that he had a system for getting around his LPs. First, he had a kind of stepladder on rollers, and he pushed it from here to there and then climbed up. Second, the LPs were divided: country here, whatever there, and he marked the divisions by having different shelves painted different colors. Like, red was shelf after shelf after shelf, and that was rock, naturally. And you saw blue, a lot of shelves, and that was Blues. And others, sometimes the colors didn't have any special match with the topics, the categories, but close enough. Ray said he had the guys in to re-paint as necessary, as his record collection changed shape.

He had so many records. The three walls weren't together. You know, you had two of them, and the stereo equipment, and that was a room. And then down a hall, you turned a corner or something, and there was another wall. Records, and he had another of the stepladders there.

Instruments here and there. Bass with an amp in the stereo room. Guitar with amp in the big room, with the conversation pit. You know, you stepped over cords, you... that was just a feature, this expensive equipment lying around. And Ray would just pick up the bass, guitar, whatever, and make a point. Talking about something, a chord, whatever, and to illustrate he'd have an instrument there ready to pick up, and... throooonng. He'd make the sound he wanted and you'd hear. That got me; how he had the instruments there and could make them do what he wanted. I mean, he wasn't bad. He had a synth organ in the big room, with the conversation pit and the guitar, but he didn't really play it much.

I guess what gets me about the record collection: just that it was big, not the usual scale of record collection to person. More like a record store, and he was managing it. I mean, it's not a grand or heroic thing to do, but it's kind of a big thing. Oversized. Most people are issued with a normal-size life, of course, and he wasn't, and in this respect you could see it. That's how it came through.

I don't know how much money comes in from the Doors publishing and the royalties. A ton, I guess. He had a big photo of him and Densmore and Krieger smoking cigarettes outside some gig. Real period. Buckskin much in view, denims. One of them had on one of those slouchy cowboy hats, like Dennis Hopper. In the bathroom there was a big blow-up of a spread from Rolling Stone. Ancient spread, some concert. Not the Miami bust, just a big concert, and there was Morrison with his shirt off. That's the only place you saw him in the whole house, from what I saw. The blow-up was a nice printing job, crisp, and it had frame of what I guess was the same chrome as the stereo equipment. It looked good! But that's the only place you saw Morrison, there in the downstairs bathroom.

Ray was working on an opera. Phone calls came in. “The people in Munich want to know about the revisions,” that kind of thing. Nathalie, Simone, is standing there holding the phone and he comes over. He stands there, him talking, somebody in Europe talking. He comes back and he says something like, “It's looking pretty good, but shit, they can't get their heads around that second act.” The opera is about St. Paul, the person, and it's not Godspell or Superstar warmed over. He talks a bit about what he's going for, certain modalities in the music and how these interact with St. Paul's outlook, his philosophy. I think the show is called Tarsus and he mentions a librettist. Other people don't get to mention librettists in their conversation.

The next year I don't hear about the opera. He talks about a suite he composed that he's going to perform at an arts festival in the southwest. The year after, he mentions the opera and it is called Tarsus. But after that he doesn't mention it, and anyway I don't see him that much. Different orbits—I'm not a rock star.

So that's Ray Manzarek. I don't know if he ever got anything done. He was 35 or so, and he wore a sports shirt and slacks. His watch was really good, you noticed.