Tell Me What Success Is

Sartwell grapples with failure as the lieutenant governor of Washington repudiates success. 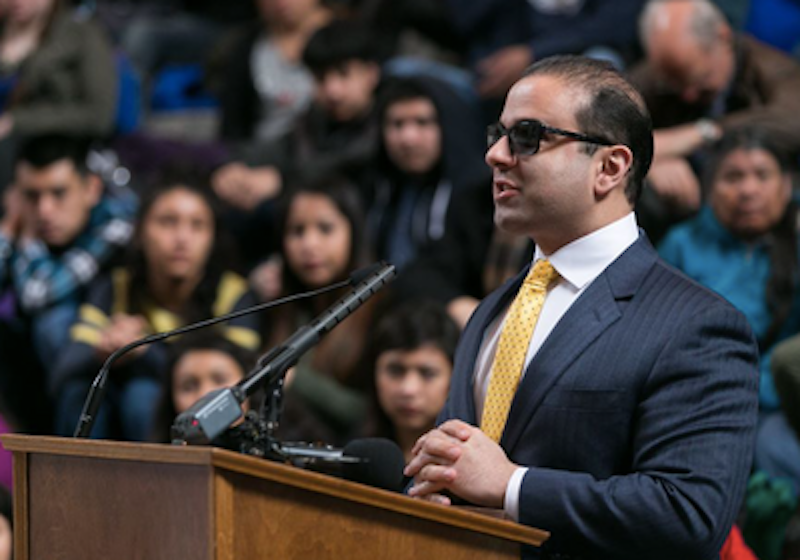 Most of my life, usually semi-secretly, I’ve been obsessed with achieving professional success. That's what's driven me: the center of my life-motivation for 40 years. And at the end of that period, when I looked around to see where I’d fetched up, I had—obviously and more or less entirely—failed by the standards I’d set, by the standards of what I’d wanted and half-expected when starting off.

I suppose that the task of resigning oneself to failure is common among we people in our 60s. I was a wildly ambitious thirtysomething professor: I thought if I worked hard and conspicuously enough, or was sufficiently flamboyantly productive to gain attention and sufficiently responsible to hold a job, I'd end up balanced on some sort of pinnacle, or in an endowed chair at Princeton or wherever, as people stumbled over one another to express their admiration for my accomplishments and genius persona. But it just didn’t happen, and I've topped out as an associate professor at a small liberal arts college, where I'm despised.

I regard myself as a failure, and it's too late to do anything about it; I've finally let go of the idea that I'm about to have a transcendent moment or reap a late crop of recognition. Rather, I'll retire and die in obscurity (I hope it's in that order). That sounds pretty bitter, I know.

But I also wonder what real professional success might’ve done to me. My academic career has been little but a series of pointed yet pointless humiliations. Humiliation, however, keeps people humble, and I have a feeling that if I’d received adoring reviews and MacArthur genius grants, I would’ve become a sort of monster. I always secretly thought I was a very smart and cool person. If everyone else appeared to agree with that, it wouldn’t have made me any smarter or cooler, but I definitely would’ve believed them.

That thirtysomething workaholic, in spite of everything, was an egomaniac who was also made miserable by his self-absorption, who was hurting other people and becoming the sort of person who ought to despise himself but doesn’t. With more success, I would be far more certain than I am that my every half-assed opinion was God's truth. I’d tend to believe a bunch of bullshit and try to control and hurt the people around me.

As a beat-down sexagenarian at least I’m not particularly dangerous. My errors seduce only myself. Most days, maybe I'm a pretty good guy. The Cash Money Professor of Philosophy at Cornell would’ve been an unbelievably arrogant asshole, a preening showboat: a little beast. I’m aware that failure has been good for my personality, in other words. I needed all those rejection letters. Probably, though I hate to say it, I needed to be called up on the carpet—for something or nothing at all—and showed how little I count. Finding out how little I count is also finding out that I'm not better than other people. And finding that out is a necessary condition of being a decent person. Not that it's not still driving me crazy, though.

I decided to write this after reading Frank Bruni's column about the lieutenant governor of Washington, Cyrus Habib. Habib has led quite a life: left blind by childhood cancer, Ronan Farrow's roommate at Yale law school, meteoric political rise. At 38—an age where my ambition burned maximally and I was obsessed with career success—Habib has decided to retire from politics and begin training as a Jesuit priest. That’s a very rare sort of decision, perhaps particularly so for an American person.

There are several ways you might come to a decision like that: for example, you might take yourself to have heard the voice of God commanding you. But the way Habib describes it is that he's escaping the dangers of success, or what he thinks success at a very high level will do to his personality. He fears that it’ll make him a bad person. Perhaps I knew the same was true for me. But I wouldn’t have been able to make the sort of decision Habib reached.

Bruni quotes Habib on how he reached his decision. “'I was in talks with a top literary agent in New York about a book deal, and it was all predicated on my biography, my identity,' he told me recently. He could feel himself being sucked into a celebrity culture in American politics that had nothing to do with public service. He could feel himself being swallowed by pride. 'How many ways,' he said 'can you be called a rising star?'"

Well, I would’ve liked to find that out for myself. But I think Habib's self-reflection is remarkable, because it comes in the middle of the very success that he repudiates. Decades older than Habib, I think the sort of failure I've experienced has kept me from becoming a monster. But Habib isn't engaged in rueful reflection on past mistakes: he's making life decisions right now on the basis of what will keep him a decent human being. Meanwhile, we might all want to reflect on what sort of person does succeed in politics and what factors make one politician more successful than another. It's not appetizing.

Habib was likely to be the next governor of Washington, and (Bruni writes) "he worried that if he moved into the governor’s office, he might be too intoxicated by power to let it go. Stepping down now, he told me, is like 'giving your car keys to someone before you start drinking.'" Habib regarded success, and success in “public service,” as a temptation, and as something that would draw him into the destruction of his own decency or even his personality. That requires a remarkable degree of self-reflection, if you ask me, and real courage.

I’ve reached the point at which, looking back, I think success would’ve been a terrible calamity for my personality, and probably harmful to the people around me too: I would’ve been insufferable, perhaps abusive. I'd probably be able to maintain just enough self-reflection to hate myself for that. But I know this also about myself: no matter what it was doing to me, I wouldn't have been able to walk away from it, even if I was finding no meaning or happiness there. I wouldn't have given it up for a spiritual vocation, even if I had felt myself to have a spiritual vocation.

I'm not the man Cyrus Habib is. Precisely because he knows its value and its temptations, he deserves the success he's repudiated. Because of what it would make me, I don't deserve the success I've coveted.