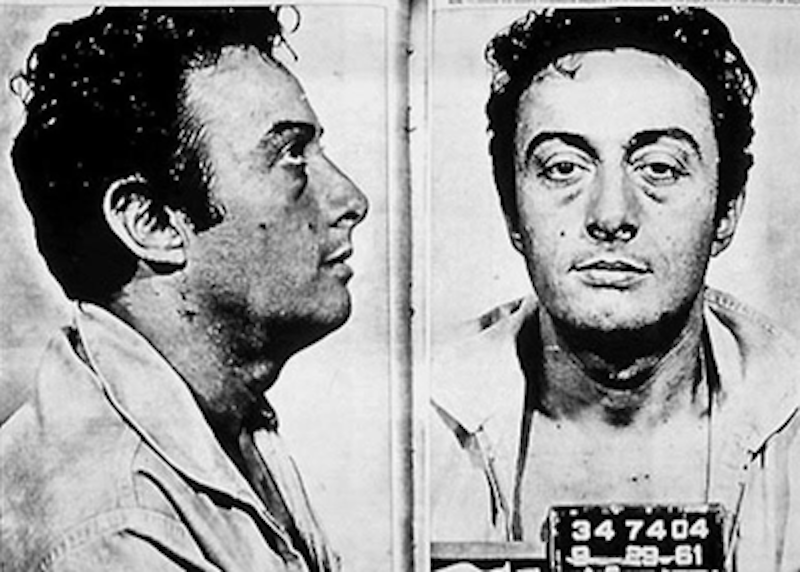 Renegade of the atomic age wreaks havoc upon unsuspecting society like a bad costume Japanese movie monster. The rogue of modern soured culture gone bad. Unwilling champion of truth in the sad faces of straight-laced damned right proper uptight narrow minded goody-two-shoe stiffs from Squaresville. Ne'er do well rebel against the norms and mores of a morally bankrupt nation. Hellbent on vilifying or denouncing the silent majority gone haywire. Images of happy days are here again flicker and fade. Liars on the sunny side of the street compound interest in the banks of zero hopes minus dreams. Where beatitude meets Bohemia and Sputniks are way out. A joke poem for the little people, so misunderstood. Lenny Bruce is dead.

How To Talk Dirty And Influence People was a primer for the unhip inept to get with it. Hear all the vintage records of live performances. Watch every video clip available of Lenny doing his shtick. Do your own thing, man. Can you dig it? From the Hungry Eye Club in San Francisco to Carnegie Hall in New York City and bits on Steve Allen’s show before the midnight cowboys roamed 52ndSt., before Andy Warhol bought a camera, The Realist, and even before Woodstock and free love.

The original version of pious extreme right-winged fascists. Arrogant Christian hypocrisy clampdown on unsuspecting brainwashed fuck puppets of the white-picket fenced. Self-serving cretins of dogma push fanatic conformist religion agenda against drugs to the flipped-out jonesing naïve masses. Strung out on patriotic fireworks of ignorance with big parades of hatred. Fall for anything and stand for nothing, down on bended knees running out of dumb luck looking for an angry fix… again.

The old guard comedians ruled the nightclubs. They weren’t allowed in WASPY white worlds so they invented one. Henny Youngman to Jackie Mason’s chicken soup for the soul. A vaudevillian burlesque sideshow, Mr. Comedy, Milton Berle, stealing everybody’s material to Jack Benny’s lousy violin, Buddy Hackett’s mumble to Don Rickles putdowns. The political satire of Mort Sahl inspired Woody Allen. So Robert Klein could be the MC of a generation. A young Jerry Lewis and a younger Jerry Seinfeld.

None could hold a torch to Lenny Bruce. He was a world unto himself. Paving the way for George Carlin, Richard Pryor and Richard Lewis. The old regime was fading fast on the spectrum laugh meter of extremes like Bill Hicks, Steve Martin, Jonathan Winters, Robin Williams and Andrew Dice Clay. Funny gals too, like Joan Rivers and Phyllis Diller. Even guys like Rodney Dangerfield, Sam Kinison and Marc Maron tip their hats to Lenny. A logical progression that begins and ends with a reluctant headline closer like Lenny Bruce.

Out of 1950s New York City Beat generation Allen Ginsberg’s Howl and William Burroughs’ Junkie start the snowball rolling down hill to hell. Kerouac was fresh from the road digging all that jazz and instant karma too. Spontaneous combustion of improvisational one-liners. Herbert Huncke sitting in the all-night automat nursing a bad habit and a bottomless mug of java joe. Moondog to Dobie Gillis. Dennis Hopper, no James Dean, Marlon Brando, Sinatra wiseguys. The Rat Pack in Vegas had nothing on those Harlem Cats. Kilroy was here.

Doing the bit, always honing the pace… refining the act. It’s like a memory of an idea forgotten to remember that you had to remind an idea of the thought in the first place. Take the long way around the joke punchline ad lib for no reason at all. Then again, Lenny Bruce wasn’t always a funny guy. Sometimes he was downright depressing. Towards the end he was really fucked up. The daily press called him a “sick” comic. A constant barrage of censorship. The endless pounding from the police for speaking the truth. The law didn’t recognize the truth. But you know it’s not so funny because it really is the truth. People who are secretly trying to fuck you over don’t want you to know that truth. The New York District Attorney who prosecuted Lenny Bruce in numerous court battles for “obscenity” charges said, “We drove him into poverty, bankruptcy and then we murdered him. We all knew what we were doing. We used the law to kill him.”

They do it all the time.