Tech Boom and Bust: Notes From The Mission 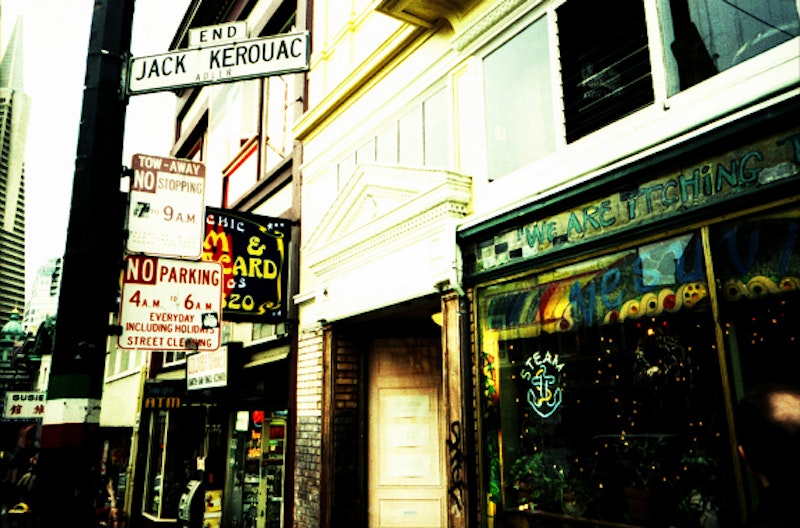 The Mission in San Francisco is sort of post-apocalyptically filthy. The first morning I’m there I watch from my friend’s front porch as a couple of Hispanic guys stop their pickup truck on Vermont St. and unload a torn-up sofa onto the sidewalk. As I walk to a coffee shop I step in piss and look up to see a homeless guy leaning against a bus stop with his dick out. I smell weed everywhere. There’s a kind of friendly craziness. A woman with face tattoos in a tutu and a Batman t-shirt says hi to me. I exit the BART station at 16th St. and a strung out black woman asks if I have five nickels for a quarter, which almost has to be a Zen kōan. An old man walks the aisles of the public library on Larkin St. yelling over and over, "Muhammad does not go to the mountain! The mountain comes to Muhammad!"

Homelessness is endemic here; recent reports estimate roughly 7,000 homeless in San Francisco. There have been drastic cuts in city services over the last few years. In an interview a few months ago with the San Francisco Bay Guardian, Jennifer Friedenbach, Director of the Coalition on Homelessness, said that since 2004—the year that San Francisco enacted the 10-Year Plan to Abolish Chronic Homelessness—“we lost about a third of our shelter beds… we had about $40 million in direct cuts to behavioral health.” Tickets for vagrancy are way up. Sanitation workers have sprayed the homeless on Market St. with hoses. Meanwhile the Haight-Ashbury is full of boutique shops selling beatnik kitsch. Tech start-ups define this town now.

At City Lights, I browse works by Kerouac and Ginsberg. I buy a book by Don Bajema and read it in a sandwich shop a few blocks away. Already Germany is up five goals on Brazil in the World Cup and they’ll add two more before I walk to the Coit Tower to look out on the Golden Gate and Alcatraz. I ride a cable car to Chinatown and buy some fried pork from a street vendor. Every alley has a trinket shop—lanterns, Buddhas, jewelry. Knock-off shit. The crowds of tourists are totally overwhelming.

A bartender at Dr. Teeth—the only bar in The Mission I could find that would put the Orioles/Nats game on—told me that the Bloody Marys at Zeitgeist were the best in San Francisco, and he wasn’t lying; they dump in the brine from their pickled vegetables and it’s just the right kind of spicy. Zeitgeist is San Francisco old and new: A rough biker bar turned Happy Hour dive for hip 9-to-5ers. I look up at another one of those “Welcome to San Francisco Now Go Homo” signs that I’ve seen everywhere. I play some (for once) fairly decent pool with a punk kid who tells me he works as a programmer. He moved here a few years ago from the Midwest, says he loves it, that he’ll never leave. “$5 a game?” I ask. He’s hesitant. “Okay, forget it. Loser buys the next round.” “That’ll work,” he says. We’ll keep it friendly.