George R.R. Martin and His Personal Tureen of Shit

He won't take it anymore. 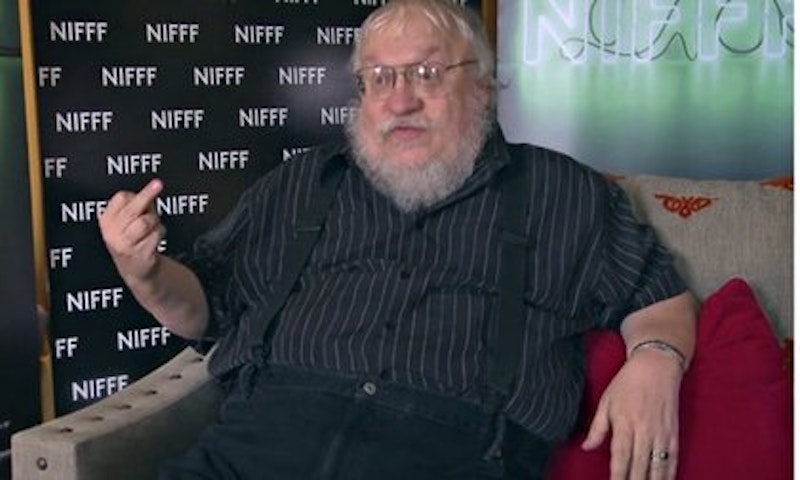 A Swiss German reporter snuffles his way into asking the author George R.R. Martin if he might die before finishing his blockbuster fantasy series about the Starks and Lannisters and Daenerys. As the question takes form, you can see the stiffening near Martin's eyes, the way his face and chin swivel to aim his gaze somewhere else, away from the reporter. Martin's mouth starts working: it pushes shut, opens up again, pushes shut. He knows what's coming. He's about to have his face dipped in the same petite, custom-made tureen of shit for the 294th time.

When the Swiss fool is done, Martin launches. “I find that question pretty offensive, frankly,” he says, “when people start speculating about my death and my health.” By “that question,” Martin appears to mean the question just out of the reporter's mouth, but the mention of “people” provides cover. “So fuck you to those people,” Martin says, and there's his middle finger standing between his beard and the reporter's face. Martin lets out a giggle, to show he's kidding. The rest of the interview proceeds without incident.

George Martin leads an odd life. He's as successful as a writer can get, and this has become a reason for people to humiliate him. “Those people,” the ones who bitch on the Internet about the wait for new books, love to talk about Martin's fatness. They do this when discussing his general inadequacy as a person, the shortcomings that add up to their long wait for more prose about dragons and Westeros. And they do it when estimating their chances of seeing his series, A Song of Ice and Fire, actually wrap up.

Medically, fat is the top reason Martin can be considered a so-so bet for survival. Yes, he might be hit by something out of the blue, like the disease that killed Robert Jordan before he could finish the Wheel of Time series. (As Martin has pointed out, the two of them were friends, so fans are being especially delightful when they ask if he'll “pull a Jordan.”) But long shots aside, Martin has the money for first-class health care and he doesn't dive from airplanes. Being greatly, hugely fat is what makes him a risk. When people talk about his dying, that's what they're talking about.

Martin is stuck with these clowns because he did something they can't. He wrote 4197 pages of prose that people desperately want to read. One morning he sat down with an idea about oversized wolf cubs, and now he's writing the longest novel on record, one that keeps millions of readers plunging through volume after volume, each volume weighing about 10 pounds and representing a phase in a single, continuing story that this man has to invent and keep straight in his head.

A few years ago Neil Gaiman, the well-known author and literary politician, issued a slogan for Martin supporters to use in message board debates: “George R.R. Martin is not your bitch.” That battering ram has plowed away many opponents. But it applies to a single point, whether buying a book entitles a reader to treat the book's writer as an employee who must make quota. (Answer: no.) What strikes me is how grotesque it is for enemies to say Martin is lazy. His Song of Ice and Fire is the pulp novel equivalent of the interstate highway system, and this man is building it all by himself. He's John Henry at a word processor, and he has to listen to idlers telling each other how he's too weak and self-involved and unmotivated to get the job done when they want it done.

Lazy and fat, they say. They want to humiliate him. That's a Westeros kind of thing, and maybe Martin's prose attracts cruel little pissants. He seems like a decent sort, judging by interviews, but a lot of his massive book is about humiliation. The characters go Medieval on each other. Sometimes they do it with flair and cook up symbolic mutilations and executions. Sometimes they skip the fancy stuff and stick to grinding down the victim until he crawls on the floor. Either way they treat suffering as a show, and that means the books do too.

Possibly some of the readers drawn to that show want to stage one of their own. And there's their target, the biggest figure on their little horizon, the man who has filled their lives with his creativity and inventiveness. So they pick him, and it isn't fair. Really, it makes sense only if you assume that people are too small and stupid to look an inch above the dirt and get some perspective. But the same is true of Martin's novels, and those are pretty good, so it looks like we're stuck with the situation.