This Boot Is Barely Made for Walking

Coping with the minor indignities of age. 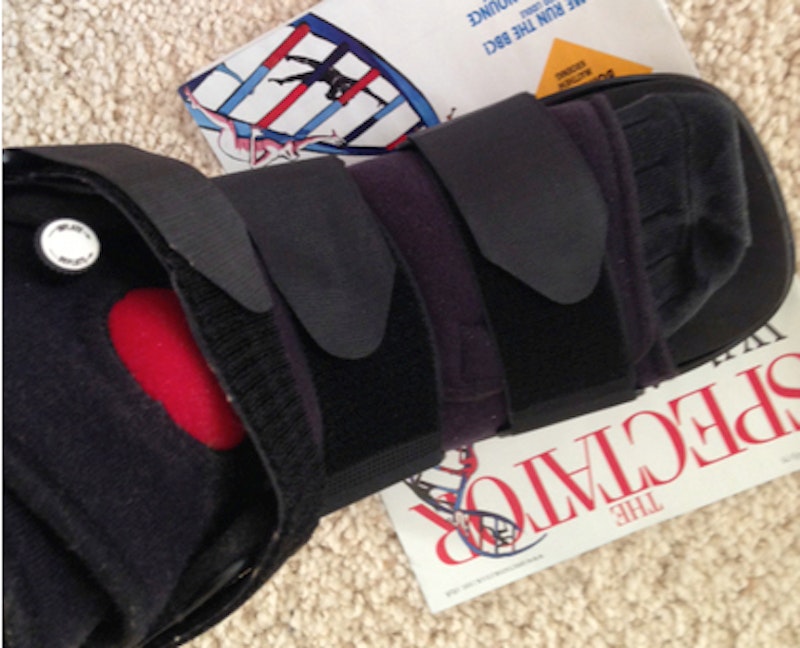 Next year I’ll turn 60, and although St. Peter’s greeting is defiantly just one diagnosis away, no real complaints here about my well-being. Sure, my eyesight goes further South every year—say hey to Mr. Magoo!—but apparently I’ve been spared the worst genetic defects of my parents, who were both snuffed in middle age by heart disease and brain cancer, respectively. All of which could change in the space of seven quick renditions of “Whistle While You Work,” but at present, this Humpty Dumpty is still perched on that glorious wall.

Still, the indignities of age do crop up now and again, and my lifelong stubbornness in hieing off to the doctor when a malady occurs has reached the point where smug stoicism is not so smart. I should’ve learned this lesson back in 2009 when a rash broke out first on my chest and then neck, which I ignored until my wife got out the rolling pin and made an appointment for me at Baltimore’s GBMC, my preferred hospital (if one can really have a preference for one of those gloomy institutions), and it turned out I had a severe case of shingles. My physician just glowered and said I’d compounded the problem by waiting so long, and warned that recovery was not in the offing in just a week’s time.

Lesson not learned! Ten days ago, I was shutting down the sun room of our North Baltimore house—lights, TV, dirty dishes—around midnight after dozing off at the conclusion of an outstanding Endeavour episode (the Brit prequel to Inspector Morse), and my foot had fallen asleep. Paying no heed, I went about my business and took a nasty spill while reaching for a lamp. Fell flat on my back, and completely messed up my right foot, which immediately began to swell. I gingerly walked up to my third-floor office, checked a few emails, and hit the sack. The next morning the foot had blown up to the size of a ripe cantaloupe and the first bruises appeared, but my reasoning was that since I was able to sleep nothing particularly untoward had occurred. Melissa suggested I get it checked out, evoking the better safe than sorry maxim, but I shooed her off, saying that Advil would do the trick. Went to work, walked several blocks like a gimp—is using that word a hate crime?—to Starbucks at noon for a coffee and tapped out a story that was oddly full of praise for The New York Times’ honorary septuagenarian Ross Douthat. Should’ve been a tip-off, I suppose, but I ignored it and later followed my strict routine at home.

Trouble was, as the week progressed, the swelling got worse, as did the nagging (if not crippling) pain and I started to think well, maybe this bothersome foot needs attention. Two days ago, my son Booker drove me to a convenient MedStar PromptCare on York Rd., and after filling out reams of paperwork (how they read it is anyone’s guess, since my penmanship resembles that of a dim monkey), and seeing several assistants and lying still for x-rays, the doctor there said I’d fractured the foot and fitted me with a walking boot. Swell! Not only was the boot very hard to figure out, for me at least, since it has several key straps and an inflate/deflate button, but she said that surgery or a cast might be in my immediate future. A follow-up appointment was set for the following week, but Melissa was having none of that and got me an audience with an orthopedist at St. Joseph Hospital yesterday (It’s a Catholic joint, and the crucifixes staring at you from every corner kind of creeps me out, but that’s uncharitable carping). Again, Booker chauffeured me to the unpleasantness, and though the clerks at the front desk were very grumpy, and didn’t even laugh at a joke I cracked, the doctor was terrific. Mostly because, after scanning the disc of x-rays, he said nothing more than the infernal boot was necessary.

The downside: Booker and I were planning a trip to Chicago next weekend—his first visit to Wrigley Field—and I looked forward to having dinner with Tom Rehwaldt, one of the Chicago Reader’s founders and a splendid fellow whom I haven’t seen in years. Tom and his partners had helped my co-publisher Alan Hirsch and I at the weekly City Paper in the early 1980s, with invaluable advice, as well as buying a large share of our ambitious sister paper in Washington, D.C., and, as it was heyday of print weeklies, we saw each other quite often, either in Chicago, Baltimore or New York or Phoenix. Anyhow, while the doc said I could make the trip if the swelling disappeared, he cautioned that even walking in sneakers—the preferred footwear after such an accident—my mobility would be limited. Now, really, who wants to travel to a world-class city like Chicago and not take advantage of the museums, Polish and Mexican (Chicago, oddly, has a large Mexican population) restaurants and handing out dollar bills to the hobos on Michigan Ave.?

It goes without saying that I dodged a far stickier situation, but I’m still cheesed off, mostly at myself for not attending to the foot the day after it was injured. So, the next time I throw out my back lifting far-too heavy boxes or water jugs, will I scram to the hospital? Probably not, but it appears that this cat’s cavalier attitude about bumps, bruises, nagging aches and pinched nerves is on borrowed time.