Going back to the Colonial Era in Brooklyn and Queens. 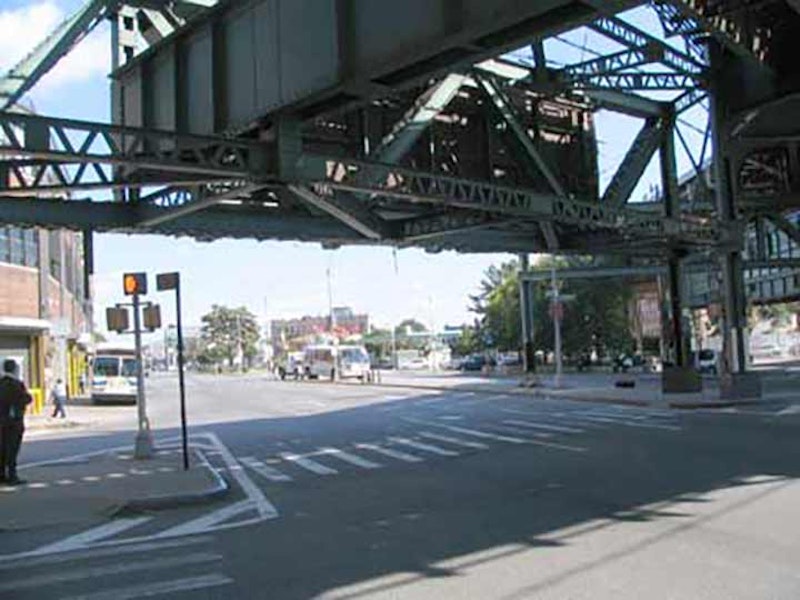 Brooklyn and Queens’ Jamaica Ave. dates back to the colonial era, and earlier than that, it was an Indian trail from the East River to mid-Long Island. An Indian trail led from the Great [Hempstead] Plains to the Cove, at the northern end of the Heights on the East River, which became the site of the Brooklyn Ferry. This trail was widened by the Hempstead settlers, and became known as the Ferry Road. Another Indian Trail, intersecting this one at Jamaica, ran along the line of Flushing Main Street, Kissena Boulevard, and Parsons Boulevard. The roads were made in the earliest days from these trails.

On June 19,1803, a law was passed, providing for one public and general highway to extend from the Ferry in Kings County, through that County and the Counties of Queens and Suffolk. The Ferry Road was improved to comply with that law. Other roads, coming from the various county towns, and connecting with the Ferry Road, were also improved under the act. The main road and these feeder lines, became one system, known under the common name of Kings Highway.

Jamaica Ave., originally paved with wood planks, was one of the “turnpikes” created under the act; tolls were collected along the road, which, at various locations (in East New York and Woodhaven, at Essex St., Nichols Ave., and today’s Van Wyck Expressway) featured tollgates, long wood poles called “pikes” that were “turned” when the toll was paid. In 1897 Jamaica Ave. became a public road and the tolls were eliminated.

Today’s Jamaica Ave. begins proper at a busy tangle of roads and elevated railroads. At this junction, known as Jewell Square, not only Fulton St., East New York Ave., and Brooklyn’s Broadway all meet, but nearby, the Canasie Elevated (the L train) and the Jamaica Elevated (J, Z) twist themselves into overhead spaghetti as they intertwine. Here you’ll find a vast subway car yard and one of Brooklyn’s largest bus depots. 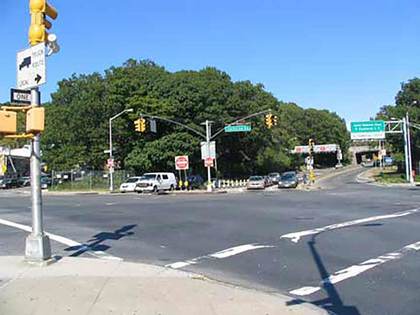 Jamaica Ave. encounters another grand junction at Pennsylvania Ave., Bushwick Ave. (barely seen at far left) running northwest through its titular neighborhood to East Williamsburg, and the Jackie Robinson Parkway, constructed through the cemetery belt and Forest Park from Jamaica Ave. to the Grand Central Parkway at Union Turnpike in Kew Gardens between 1933 and 1935. Originally a four-lane roadway with tricky curves, the road was rebuilt on a couple of occasions to make it safer. In 1997 it was renamed for the great Brooklyn Dodgers star from 1947 to 1957 on the 50th anniversary of his callup to the big leagues. It was previously known as the Interborough Parkway despite spending less than a mile in Brooklyn. 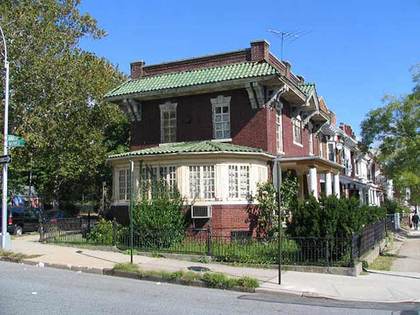 The triangle formed by Jamaica and Ridgewood Aves. and Warwick St. features a long-ago real estate development with attached brick houses and columned front porches. This house, facing Warwick, is especially interesting with its large interior porch with dozens of paned windows looking west on Jamaica Ave., and also what must be the original iron fence and gate.

Ridgewood Ave. seems to follow the occasional NYC tradition of naming an avenue for a neighborhood where it doesn’t go (see Bayside Ave. in Flushing, or Flushing Ave., from Clinton Hill, Bushwick, Ridgewood and Maspeth). However, Ridgewood Ave. is named for the nearby former Ridgewood Reservoir, just to the north in Highland Park. The reservoir was in service from 1858-1959; from 1960 to 1989, the reservoir’s third basin was filled each summer with water from the city’s massive upstate reservoirs in the Catskill Mountains, and used sporadically as a backup supply for parts of Brooklyn and Queens. It has been left untouched for several years by the city. Its pristine state is currently under scrutiny by the city, which would like to build athletic fields in its place. Local enthusiasts have initiated opposition to the proposal. 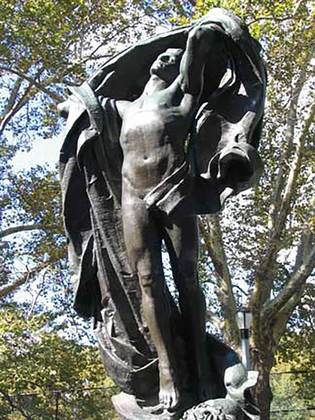 The Dawn of Glory statue in Highland Park at Jamaica Ave. and Cleveland St. was dedicated in 1924 and is the work of Italian-American sculptor Pietro Montana. This memorial, dedicated to the Cypress Hills World War I dead, reportedly employed bodybuilder Charles Atlas as the model.

Highland Park straddles Brooklyn and Queens between the Jackie Robinson Parkway, Ridgewood Reservoir and Jamaica Ave. The city of Brooklyn purchased the original parcel in 1856 for the construction of Ridgewood Reservoir. In 1905, New York City added to the park by purchasing land originally situated on the Schenck family farm. The final piece was added by 1908 with the purchase of a few acres belonging to the former Department of Water Supply, Gas and Electricity. 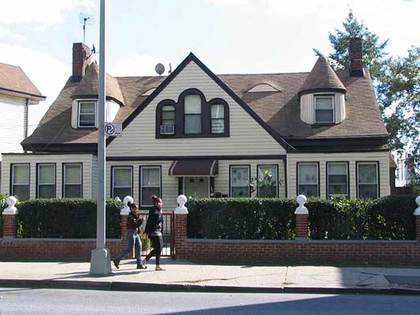 The oldest house on Jamaica Ave. is at 494, between Elton and Linwood Sts. The house was built shortly after 1800 and located on the farm belonging to Wilhelmus Stoothoff, who acquired the land from Jan Barents Bloom in 1799. It’s one of a handful of remaining colonial-era homes in Brooklyn. 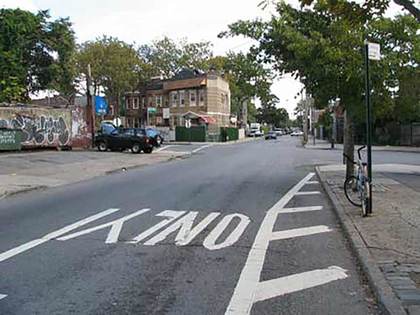 Force Tube Ave. runs southeast athwart Cypress Hills’ north-south street grid from the intersection of Jamaica Ave. and Highland Blvd. to a bit past Fulton St.. It runs directly above the high pressure water main lines that were used to transport water from Ridgewood reservoir to the former water pumping station at Conduit Blvd. and Atlantic Ave. 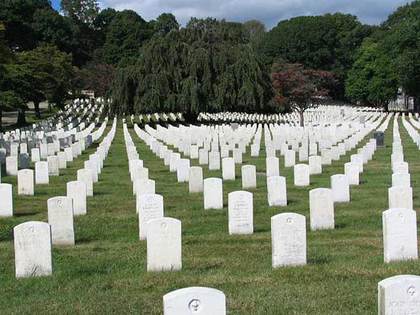 As we near Veterans’ Day 2021 it’s fitting that to include National Cemetery, Jamaica and Hale Aves. Every one of its over 21,000 stones bears the cross that appears on the gravestone of a military veteran. The National Cemetery network was established during the Civil War. On July 17, 1862, Congress enacted legislation that authorized the president to purchase “cemetery grounds” to be used as national cemeteries “for soldiers who shall have died in the service of the country.” In that first year, a National Cemetery established in Sharpsburg, Maryland became the final resting place for 4476 Union soldiers killed at the Battle of Antietam, September 17, 1862, the bloodiest day in US history. Today the National Cemetery network consists of 136 cemeteries, 120 administered by the US Department of Veterans Affairs. The most famous is the National Cemetery in Arlington, VA (located on the grounds of the great Confederate general Robert E. Lee) but we have one, Cypress Hills National Cemetery, in New York City. 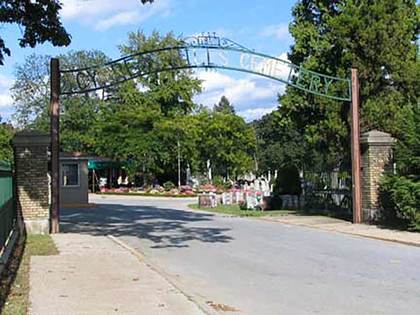 To the east of National Cemetery, Cypress Hills Cemetery was established in 1848; interred here are ragtime musician Eubie Blake, painter Piet Mondrian, entertainer Mae West and baseball’s Jackie Robinson. One of the cemetery street names is Thanatopsis Way, from William Cullen Bryant’s famed meditation on death. He wrote lines like:

Yet not to thine eternal resting-place
Shalt thou retire alone, nor couldst thou wish
Couch more magnificent. Thou shalt lie down
With patriarchs of the infant world–with kings,
The powerful of the earth–the wise, the good,
Fair forms, and hoary seers of ages past,
All in one mighty sepulchre.