Merlin’s the best lesson horse with whom I’ve worked. 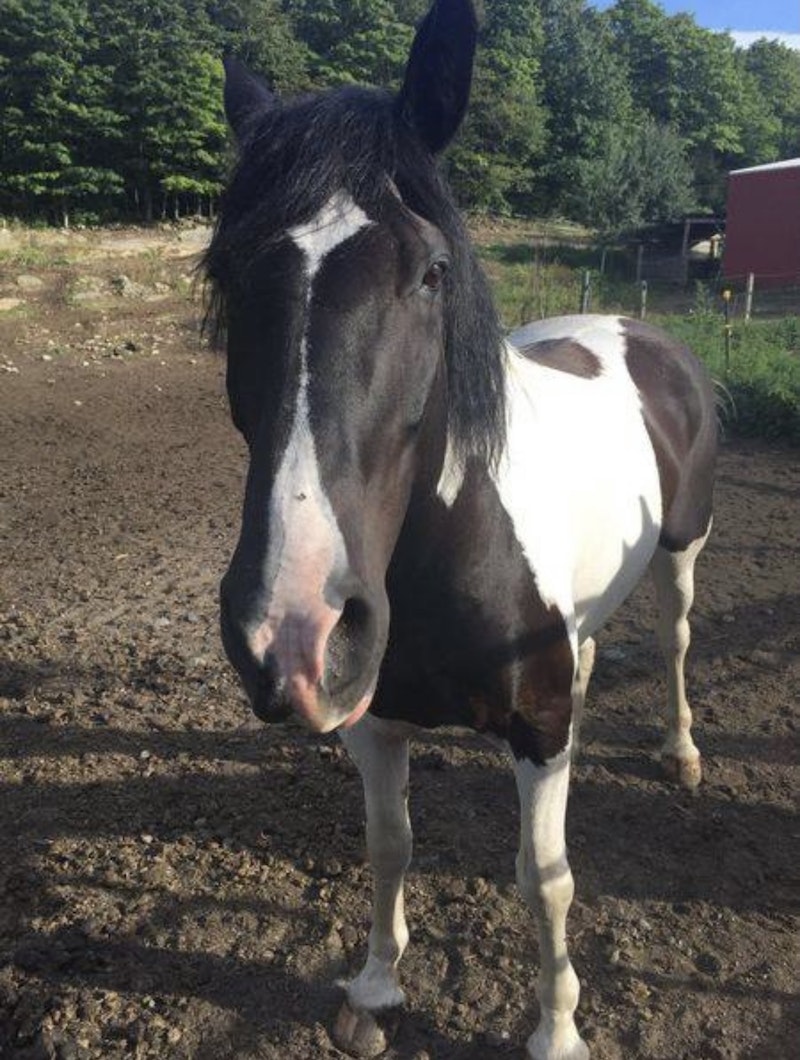 Merlin, the horse with whom I’ve worked since April 2020 at Southmowing Stables in Guilford, Vermont, stands 16.2 hands—five feet, six inches at the shoulder (not counting the neck and head)—and weighs 1800 pounds.  When I’m mounted, my eyes are roughly nine feet above the ground.

A few days ago, while driving from a Main Street parking lot in Antrim, New Hampshire, I was momentarily perplexed. Why couldn’t I see over the parked cars for an approaching vehicle? Then it clicked: I wasn’t astride what my sister calls the Very Big Horse, VBH for short. If I had been, I could’ve seen everything moving on the road.

This was imbecility: I was thinking behind the wheel as if I were in the saddle.

When I met Merlin, I assumed his size and bulk meant he was slow and clumsy. That, like most prejudices, was also imbecility. Once I’d thrown my leg over his back, I found him strong, fast, agile, and responsive. I learned that he’d not been trained before he came to Southmowing. Beth, a fellow rider who rides competitively and teaches taekwondo, took on the job. She spent two years training Merlin to be a hunter, a discipline suited to his speed, strength, and courage.

One afternoon Merlin and I were trotting in Southmowing’s large, rectangular indoor arena. Dorothy Crosby, my instructor, directed me to turn at a given corner, cross the arena diagonally, and as we reached the opposite corner, change our direction, and go large—take him around the arena’s perimeter, still at the trot. I overshot the first corner. My fault, not his. We circled back and halted.

I shifted my focus—eyes, face, shoulders, torso, and hips—to our goal. This shifted my weight. Before my left leg could press his side, his hind legs began passing gracefully, one over the other, neatly realigning him to the opposite corner.

Another horse might’ve merely shuffled its hooves. Merlin’s movements were far more elegant, a sign of a well-trained horse. I patted his neck in gratitude, booted his sides and, after a few steps at the walk, tapped once more to trot.

Merlin’s the best lesson horse with whom I’ve worked. Save for some minor quirks, he’s well-behaved while I’m in the saddle. For example, when I’m turning him at the trot to pass a corner, he sometimes continues turning in a circle. I pull the appropriate rein back to my knee to pull his head in the right direction. He generally complies.

He’s different before I’ve mounted and after I’ve dismounted.

He’s described as “strongly food motivated.” I write of fighting him to his paddock. When we leave the barn for the paddock, he immediately lunges for every blade of grass along the way. I can wait for him to denude the local plants or, as he pauses to chew, seize the lead rope and start running down the path. He usually follows as I’ve momentarily distracted him from his driving passion.

But never step between Merlin’s 1800 pounds of bone, muscle, and appetite and his next snack: he’ll step on you. To revive a very old joke, Merlin is on the seafood diet: he sees food and he eats it.

After that day’s lesson, I rode him back to the barn, dismounted, led him inside, removed the bridle, put on the halter, and cross-tied him.

He’s usually stubborn about having his hooves picked. He simply puts his feet down and keeps them down.

Cleaning them is essential: “No hoof, no horse.” A horse’s hoof is thick and hard, yet pliable. Like the human fingernail, the hoof continues growing throughout the horse’s life. At the rear of the hoof, very near the heel, are the frog and bulbs of heel, which form a rough triangle. It functions as a shock absorber. Regular cleaning keeps it healthy.

That day he was cooperative.  I’d cleaned three hooves, proceeding in the usual order: left fore, left hind, and right hind. Once I’d reached his right fore leg, I bent and leaned against his shoulder. He raised the hoof. I took it in my left palm. With the hoof pick, I began scraping dirt and manure from the sole and the crevices between the frog and the sole.

The crossties give Merlin some range of movement. He suddenly craned his neck to his right and nipped me in the right buttock. To borrow a line from the Irish R.M. stories of Somerville and Ross, I responded in language better suited to the moment than the printed page.

Then I stepped in front of him. If a horse could smirk, Merlin was smirking. As Dorothy had directed me to do when he nips me, I stepped back, drew off my right glove, loudly said “No!”, and gently slapped his muzzle.

I wonder whether his infancy molded this side of his temperament. He's a PMU rescue colt.

PMU stands for pregnant mare’s urine, the raw material of Premarin, a medication to alleviate the discomforts of menopause.  This raw material is produced by mares restrained in stalls, attached to bags for the collection of urine. They're kept constantly pregnant by artificial insemination. Big Pharma never allows its mares out of the stall, to run and play with other horses, to become part of a herd, to be horses. Profit requires their torture.

The foals and fillies (males and females, respectively) are taken from the dam at birth because allowing her to nurse them would take time from production.  The foals imprint on humans, not on horses, because humans feed them.

I understand that healthy fillies are kept and eventually placed in the production line. Foals, more likely than not, are sold for pet food.

My mother took Premarin. Having known her for 55 years, I know that if she’d known how it was made, she would’veendured menopause.

Anyway, Merlin was rescued. As his mother wasn’t allowed to nurse him, he didn’t imprint on horses, but on the humans who fed him. He came to Southmowing from a widow who didn’t work him. He was essentially a pasture ornament. The widow feared his size and strength and spoiled him with food.

When he arrived at Southmowing, he was obese and weighed over a ton. He has slowly lost weight through diet and exercise. He generally tolerates humans. He loves children. He shows them a gentleness and good nature, even friendliness, which he rarely shows adults. I speculate that they somehow communicate their innocence, lack of evil intent, and awe at his size and strength, and he responds accordingly.

Very early in our relationship, I gave him a carrot after a good lesson. I believe he saw it as an entitlement, not a reward. He apparently concluded that I had treats on me at all times and was perversely keeping them from him. This misunderstanding, which didn’t put me on his good side, had consequences.

Horses are social animals. They naturally hang out with each other and form themselves into herds, each horse with its own role to play.

Merlin dislikes mares. He treats most male horses with disdain. I gather from the riders who love him that he has nippy days with them, too. Hence he lives alone in his own paddock, which seems to suit him. I believe this is perverse, the consequence of human cruelty fomented by human greed.

Then there's his reading of my experience, physical fitness, and temperament. Horses accurately read those things through our physical communications. I've ridden once a week for nearly five years. I’m still stiff and my flexibility exercises still haven't overcome that. I've poor balance and coordination, too. Yet I ride.

Although he grasps that I'm unafraid of him, and I know he wouldn't kill me, Merlin has little patience for inexperienced adult riders as a waste of his time.

Once, I was removing the bridle. He suddenly lunged at me, teeth bared. I evaded the teeth. Then I lost my temper, bared my teeth in a grimace, and lunged at his muzzle. I’d no intention of touching him and I didn’t. To my horror, he flinched. I’d scared him. That’s not how one treats or trains a horse. I apologized. I hope he understood from my tone and manner.

I admit he was unusually well-behaved for the rest of that session.

One afternoon in early April, we were working well together. We were trotting; I had good posture and soft hands. I was posting in rhythm with his movements. We were turning a corner when the saddle slipped beneath me. If I’d a second more, I’d have loosed my feet from the stirrups, dropped the reins, and seized his mane to remain on his back. I didn’t think of all that.

So the ground came up to meet me. I landed on my outstretched hands, spraining my left wrist and right shoulder. Merlin trotted on a few paces and stopped. Dorothy restrained him just in case. I rolled onto my back, sat up, placed my hands on my knees, and began collecting my thoughts.

Most horse problems stem from the rider. I couldn’t think of what I might’ve done wrong. Later, I learned the saddle slip stemmed from defective equipment.  Neither horse nor rider was at fault. Dorothy knelt to see how I was. I took my right hand from my knee and saw the kneecap of my breeches soaked in blood. I knew I hadn’t injured my knee. I turned the hand to see a deep gash in my palm.

An older rider reined up some feet away and boomed, “Now, Bill, you’re a real rider!” I laughed. Then I got to my feet and Dorothy walked me to a room off to the side. There she expertly cleaned, disinfected, and bandaged the wound. She asked whether I wanted to remount. For once, I declined.

I walked with Dorothy and Merlin back to the stable. She'd groom Merlin as I wouldn’t have been up to it. After he was secured in the crossties, I stepped closer. We looked at each other. For once, he simply gazed back. I sensed he knew I was in pain. I stroked his neck and thanked him for his time. Then I went home, not to return for several months.

Recovering from muscle sprain at 66 takes more time than it once did.

During this interruption, I read about modern methods of training and reflected on my experience of Merlin. I believe part of his response to human cruelty has been akin to locking the door on his emotions. Children innocently unlock it. After their lessons, he locks up again.

The hard part is mastering me.