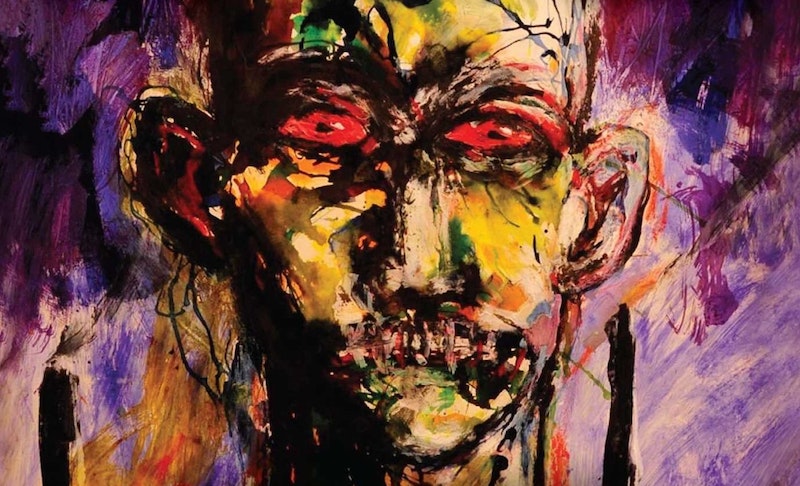 The line between pleasure and pain is thin, and human beings tend to avoid the foray into such unknown desires that activate this tense relationship. Frank Cotton was among the few who not only desired the highest form of pleasure but also actively sought it. He found it, in what was known as Lemarchand’s box—a sphere inhabited by inhuman creatures, known as Cenobites. Frank gets more than he bargained for, and solving the puzzle of Lemarchand’s box unleashes the horror show that can only come from the brilliant and uniquely imaginative mind of Clive Barker.

The Hellbound Heart, which has literary and philosophical traces of Marquis de Sade and Georges Battaile, shows a vision of an insatiable appetite for pleasure that’s almost indistinguishable from pain. Frank Cotton is a restless man, and instead of seeking the world of ethical relationality, Frank’s interior and silent screams lead him into a region that he’ll come to regret.

After he opened Lemarchand’s box, Frank expected that a harem-like world will greet him but instead, Cenobites enveloped him in darkness with clearly one intent: a metaphysical takeover of Frank’s body and thus, consciousness and soul. Cenobites aren’t nice creatures, and appear to be genderless and ugly. Frank expected “splendors” of pleasure which would “come with women; women shaved and muscles for the act of love: their lips perfumed, their thighs trembling to spread… He had expected sighs, and languid bodies spread on the floor underfoot like a living carpet; had expected virgin whores whose every crevice was his for the asking and whose skills would press him—upward, upward—to undreamed-of ecstasies.”

“The collision of sensuality and death appalled him,” writes Barker, and it’s not something that Frank could handle. The Cenobites were intent on destroying Frank, especially because of his arrogance. Yet he can’t really be pitied because even before he entered into an erotic labyrinth that was other-worldly, Frank’s pleasure-seeking left him with no sense of morality and scruples. A week before his brother Rory’s wedding, he seduces his wife-to-be, Julia. Yet this seduction was hardly playful. Frank didn’t waste time “with the niceties of seduction. The smooth exterior gave way to cruder stuff almost immediately. Their coupling had had in every regard but the matter of her acquiescence, all the aggression and the joylessness of rape.”

The house and the room where it occurred were sealed and covered until Rory and Frank inherited the house. Since Frank’s nowhere to be found and is presumably “in the shallows of criminality,” Rory decides to claim the house for himself and Julia. Everything appears to be idyllic until Julia finds the room in which Frank summoned the Cenobites. She can’t quite comprehend why she’s so attracted to it, and “wasn’t sure why she went up, nor how to account for the odd assortment of feelings that beset her while there. But there was something about the dark interior that gave her comfort; it was a womb of sorts, a dead woman’s womb. Sometimes, when Rory was at work, she simply took herself up the stairs and sat in the stillness, thinking of nothing; or at least nothing she could put words to.”

In almost the same way, Julia’s being seduced by the disembodied darkness just as she was overtaken by the desires of the flesh with Frank. Barker’s brilliant at making these distinctions between body and soul, as well as the implications of the consequences when a choice is made. In the midst of the unexplained and mysterious ongoing seduction (which is far more complex than the aggressive consummation of the affair between Julia and Frank), we witness an emergence of what’s to come: the continuous tense relationship between pleasure and pain.

Barker doesn’t fall into a simplistic exploration of sadomasochism. Rather, the relation between pleasure and pain runs simultaneously to the tension between good and evil. Julia’s and Frank’s real transgression is not so much in the way that their affair was consummated, or that Julia wants to be overtaken and submissive erotically, or even Frank’s desires to feel pleasurable orgasm that goes beyond body. The most important transgression is in the ethical and psychological element that Barker brings into this tale of darkness.

Julia commits adultery, and Frank dismisses and betrays his brother. Julia finds Rory to be a pathetic man, and the only emotion that she has for him is pity and amusement. When Rory badly cuts himself, and drips blood in the room in which Frank opened Lemarchand’s box, and that ultimately begins the process of Frank’s unholy resurrection, Julia’s both amused and dismissive of what she perceives as useless whining.

In the hospital, Julia and Rory “waited an hour in a queue of the walking wounded before he was finally seen, and stitched up. It was difficult for her to know in retrospect what was more comical about the episode: his weakness, or the extravagance of his subsequent gratitude. She told him, when he became fulsome, that she didn’t want thanks from him, and it was true. She wanted nothing that he could offer her, except perhaps his absence.”