She's an old dog, but she still loves fetch. 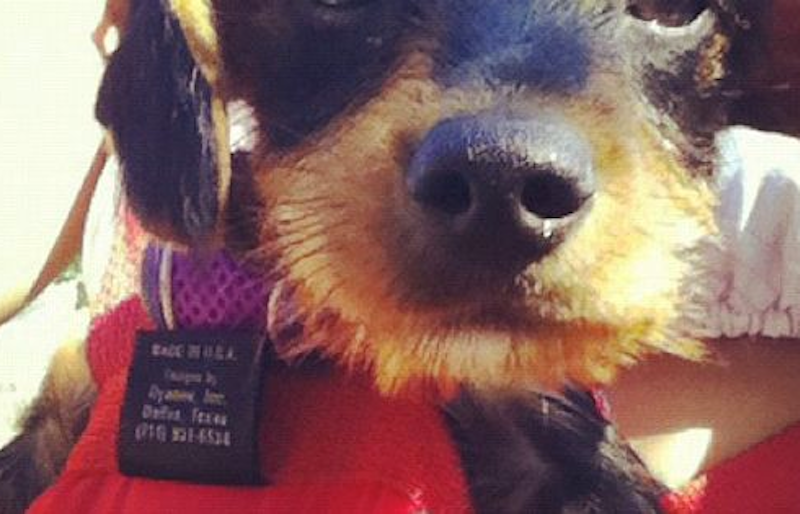 As much as we’ve tried to make nuptials about love and not property, it's still true that when you get married you inherit some things. Siska is my wife's dog and I guess now she's my dog too. Siska is a 12-pound, 12-year-old blonde Dachshund/Yorkie cross, a Dorkie. She's a curious, funny little dog. She loves crunchy vegetables, hates it when other dogs try to sniff her butt, and recognizes not just many words but spellings of words.

This Dorkie's greatest enthusiasm is her love of ball. She loves playing with a bouncy ball, with or without people. She loves to fetch it when we throw it or unwrap a blanket when we bury it there to buy time. She loves rolling around with it on the carpet and covering and uncovering it with blankets or her dog bed. She'll even roll it down a hill to go fetch it. Normally, she won't eat her supper unless there's a ball there for her to bounce between bites of kibble.

And a new ball, my God! I wish I could be as excited about anything as that dog is about discovering a new ball, which she sometimes does when we bring home plastic bags from the Dollar Store. Siska knows what comes from the Dollar Store and so goes rooting around every bag until she sees if there's a new spherical adventure in there for her. The other day, she struck paydirt.

Siska’s not a young dog, and lately has had a hard time. During hot snaps this summer, she hasn't wanted to go outside in the blazing sun much. On walks, she practically sprints from one spot of shade to the next. She's had a flea infestation and various infections and inflammations, prompting visits to the vet. So I picked up a new bundle of balls for her when I was buying cheap toiletries.

Anj told me stories about Siska in her youth, playing catch for up to eight hours at a stretch without stopping. It's not that I didn't believe my wife, but it was hard to picture that. The Siska I know has to pause often and lay down with the ball. Often she makes a game of it by putting the ball down right in front of her and then snatching it up when you reach for it.

There must’ve been something about this specific ball, a golden yellow number that jarred a memory from long ago. Siska bugged us to throw it to her for hours on one of the hottest days of the year. Her sides were heaving like a blast furnace but she didn't seem to notice. Until the adults finally laid her down to sleep on that sweltering August night, she was like a carefree pup again, playing the game that never ends.