Tommy B. works too. 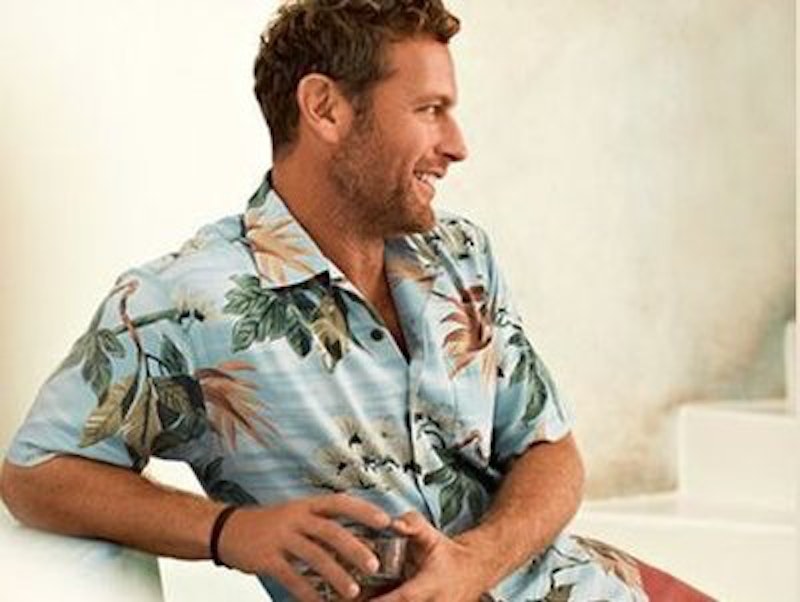 I laughed when I saw Tommy Bahama resort wear on sale back in what, the 1990s? I didn’t know it yet, but Tommy Bahama struck the same funny bone as Carlos Danger would many years later. Nothing to do with the duds. Just that Krameresque, goofily evocative name.

All I could picture was Al Bundy arguing with the Dive Shack guy over snorkels and flippers. Could have been any larded tourist of any of the usual suspect nationalities, a giant silk parrot flag of a hard-charger who wasn’t about to be railroaded by Big Hospitality, or whomever.

Then again, it could’ve been larded me arguing with the Dive Shack guy and getting just as far.

Point is, I wouldn’t have been caught dead dressed in Tommy Bahama arguing about snorkels and flippers. I’d be wearing some threadbare L.L. Bean t-shirt. Or some lame Land’s End jersey kissed with the ghost of a mustard stain. Resort wear? The words go together like leisure and suit. Funny though, some decades later over the dam, I needed a Hawaiian shirt for a gag photo and found myself in a secondhand clothing shop in Gloucester, Massachusetts.

Too rich. I was blessed. I spied a Tommy Bahama tropical patterned silk shirt just my size for cheap. Cracked myself up I did, and couldn’t wait to shoot the Facebook selfie, required for honorary membership in the Beach Boys Amateur Radio Club of Morro Bay, California. I’m a cartoonist, see—a ham radio cartoonist—a retirement occupation that can involve occasionally playing a figure of fun for purposes of self-promotion.

Before you write this off as shaggy dog non sequitur, here’s where I’m headed. Somewhere between the gag selfie and a recent backyard party to meet the friends of a new friend, I got into the habit of wearing my Tommy Bahama shirt in public. What began as facetious fashion became a favorite I save for good. Biggest surprise of all, in this shirt, I appear to pass for just another geezer, unremarkable as any slightly older coot in Haggar slacks and blinding white running shoes.

Just how and when did I become Tommy Bahama?

Somewhere in the arc of my dotage I obliviously crossed a critical threshold, not unlike the event horizon of a black hole. Beyond that point, it doesn’t matter what you wear because, it doesn’t. You’re not seen so much as suggested, should anyone care to waste an inference. Snack food disappears. Channels abruptly change on the TV. Laundry accumulates, and reappears in the bedroom closet. Mind you, that’s laundry in the abstract, shadowy, indistinct, more chimera than shirt or pant.

My retired state cannot be directly discerned, like an exoplanet far beyond the workaday solar system. However, tiny perturbations generated by my quirky habits, appetite for Sugar Pops and obscure hobbies might, given enough detectors, yield a fuzzy image of my Bahamian persona, but it’d take the combined gross national product of the world and more energy than a million CERNs to visualize.

So a cold, cruel, critical world finally has younger fish to fry. At long last, we Tommy Bahamas, we Saucony ‘n’ Sansabelt Seniors are free to be we.

And that’s all right I guess. Because that also means we can say and do the preposterous on our far side of the event horizon and nobody will give us any guff or so much as a rat’s ass. Oh a few might theorize that we exist as cute dark matter, or a superstring of incredibly tiresome fogies. Of course, the overwhelming majority of sub-seniors have moved on to post-Olympics analysis. To Customer Facing Analytics. And to apps tracking how much frosting they gnaw from the edge of corrugated cupcake wrappers. On this side of the event horizon we’re more focused on the heat. Or is it the humidity?

Just the other Saturday night I watched a bunch of people my age, some in Hawaiian shirts, many all-dolled up and extra smart, dancing to live Louisiana music by the Pine Leaf Boys. Rolling Stone calls their Cajun sound “the next best thing to a dance on Saturday night!” And by gee, as best things go, those Boys really put on a show. Afterward out in the parking lot, I noticed, a van from an Assisted Living Facility, but nobody I saw that night needed much assistance.

What’s more, after that night I didn’t feel so bad about becoming Tommy Bahama. Might be too late to roll those trousers or eat that peach. But if I can wear a flowered silk shirt perhaps I can learn to dance. Me oh my, that looked like big fun. And no arguing about snorkels and flippers required.