Shot in the Heart at the Pierce-Arrow Factory 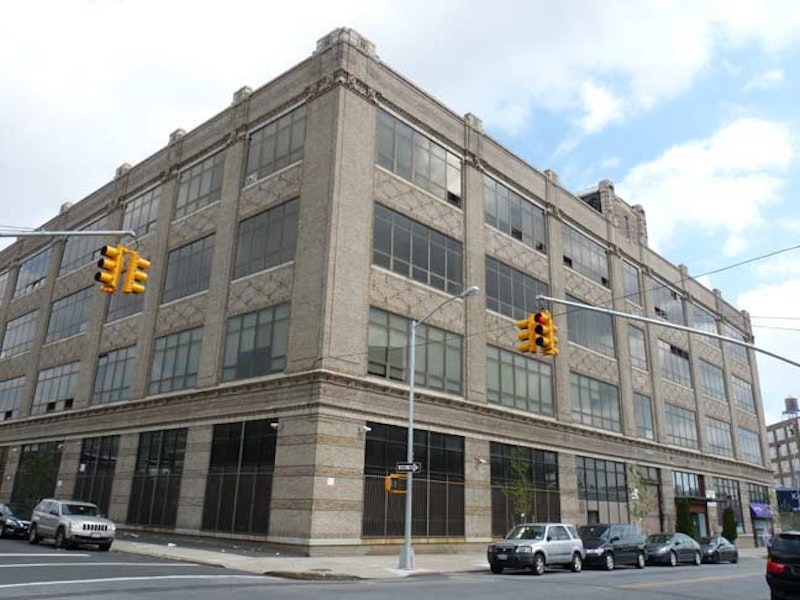 Northern Boulevard was originally an Indian trail, then a toll road for carts and wagons, and now a pedal to the metal car, bus, and truck route to eastern Long Island. While the mother road of the north shore of Long Island is home to many used car dealerships, it has also been Queens’ main drag for automobile manufacturers and suppliers. I worked briefly at Standard Motor Parts in 1999, which has been supplying the auto industry with ignitions, spark plugs, and the like since the 1910s. The boulevard also has several factories and showrooms for long-lost auto makes, such as Packard and Pierce-Arrow. 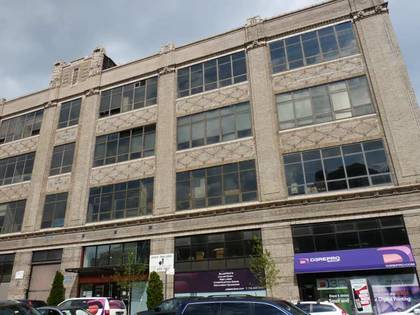 Pierce-Arrow, based in Buffalo from 1903 to 1938, evolved from a luxury birdcage manufacturer established in 1865 (Heinz, Pierce and Munschauer). Henry N. Pierce bought out his two partners and began building and retailing bicycles and motorcycles in 1896, with the leap to automobiles in 1901. The company’s first success, a two-cylinder auto, named the Arrow, appeared in 1903. The company’s first commercial success, the four-cylinder Great Arrow, arrived in 1904. Though George Pierce sold all his company rights in 1907 and passed away in 1910, the company was known as Pierce-Arrow from 1908 to 1938.

Pierce-Arrow became known for its luxury autos, as film stars and heads of state made sure to have at least one Pierce in their collection (William H. Taft made the Arrow the first official car associated with the White House). Later, however, since Pierce-Arrow didn’t have a moderate-priced line, the company suffered during the Depression and closed its Buffalo factory, which has since been declared a landmark. 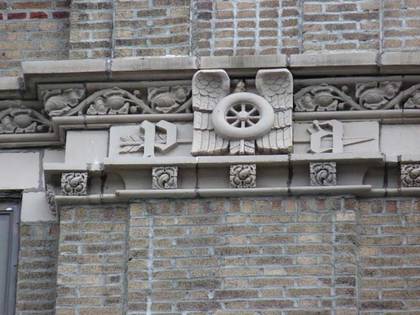 Pierce-Arrow’s 1913 Long Island City factory still stands on 38th Avenue between 34th Street and Northern Boulevard across from, appropriately, a gas station. I have a strong admiration for stolid brick architecture, and the factory imparts a sense of permanence, even though its parent company existed for only thirty years. The building once had a lengthy, arrow-shaped neon sign, emblazoned with the word “Pierce.”

After Pierce-Arrow folded, the building was home to a TV and radio manufacturer and has long served as a home for warehouses, light manufacturing, and artist spaces.

To me, the company ID treatments on the exterior pilasters, or half columns, are the most fascinating. These are rendered in terra cotta with the winged-wheel motif that was also popular on humble garages and auto-repair shops of the time. The letters P and A, in Old English blackletter, are connected by a stylized arrow. The building has a couple of variations on this theme. 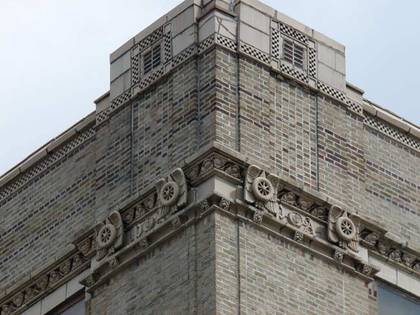 On the corner, note the checkerboard style on the cornice, rendered in different color bricks. The "checker" motif would be adopted by NYC cab companies, but I’m unsure whether the Pierce-Arrow building inspired it. 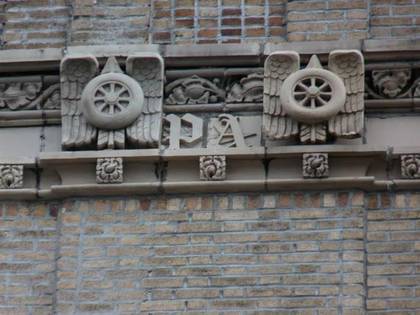 On this variation there are two wheels with the P and A together on a shorter arrow in the center.

In the factory’s early days, the roof held a giant illuminated billboard spelling out the word "PIERCE" with a giant arrow displayed behind it. The IND Subway, which has a nearby 36th Street exit, was built on Northern Boulevard shortly before the demise of Piece-Arrow. The building hosted the also long-gone Olympic radio and TV factory for several years.