Tarkovsky’s Films Speak to the Glory Of The USSR 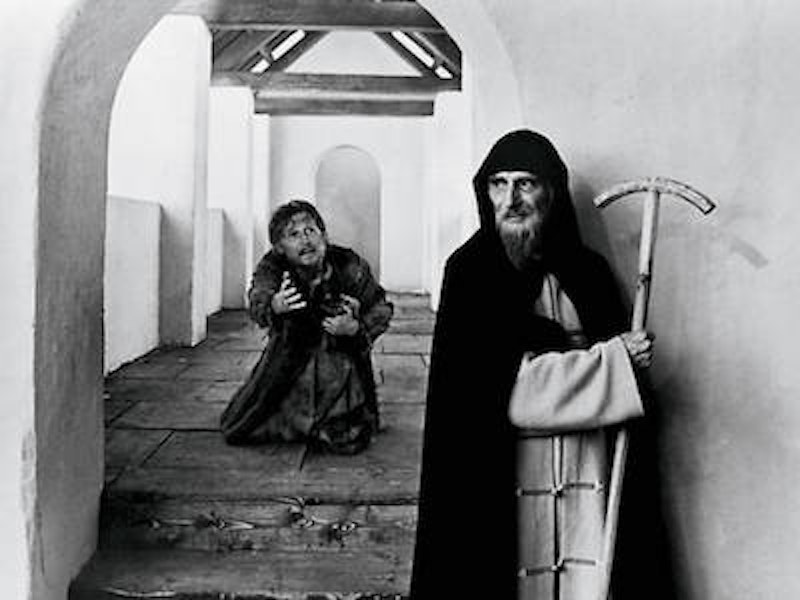 Last night was nice. While Mother dragged 50-pound sacks of lime into our north field, preparatory to spreading the substance across our acre of soil the next morning at dawn, I settled into my armchair with a dram of Armagnac and my disc of Andrei Rublev. That film, cultured people will know, is Tarkovsky’s poetic evocation of the life of the great 15th-century Russian icon painter, one of the many giants of the Orthodox Church.

What pleasures the film offers! I’ve seen it at least 50 times now, and never cease to be moved by it, or to find something new in its lusciously black and white tapestry of late medieval Muscovy in all its beauty. (“That movie is your Big Lebowski,” Daughter has told me.)

I won’t spend time arguing the merits of this movie, which long ago entered the pantheon and which critics tend to place in the Top 10, or even the Top 5, of the world’s cinematic creations. But I do find it interesting that this religious work, so saturated with the Orthodox Church’s humane values, is a product of the Soviet Union—more, of the Soviet Union of the mid-1960s era of Brezhnev’s “neo-Stalinization,” when the KGB tightened the reigns after the crypto-Semitism and borderline liberalism of Khrushchev’s “thaw.” I’ve long argued that we pro-Kremlin paleocons need to be very skeptical of the dominant neocon/neo-liberal/American jingo idea of the USSR’s perfidy. I’ve said that we must look at the USSR as one temporary manifestation of the Russian Empire in all its might and splendor—one with its flaws, to be sure, but also with its virtues. Russia is our holy mother, and between 1917 and 1992 she assumed a certain guise. We wouldn’t forsake our biological mother just because she temporarily assumed a certain guise—appearing in public in this or that new coat—would we?

One virtue of the Soviet Union, some might be surprised to learn, was that it produced exceptional Russian Orthodox religious art—judging, at least, by the existence of Andrei Rublev. Yes, it’s a funny thing indeed that the state filmmaking organ of what we’re told was an atheist state, a state that “persecuted believers” as the American propaganda always tells us, should have worked with Tarkovsky to make his Orthodox devotional masterpiece.

I find myself next asking another question: Would Tarkovsky have been allowed to make such a film in the West? I can’t speak for Western Europe, but as regards the world’s dominant movie industry, Hollywood’s, the answer is clear: absolutely not. Hollywood’s decision-makers, all of them close-knit and colluding members of a certain tribe actively hostile to interests of Russia, Russians, and the Great Russian Orthodox Church, would have laughed Tarkovsky out of their offices there in Los Angeles, that city that defines the “thinness” and triviality of our consumer civilization. (A caveat: Had Hollywood smelled money in Tarkovsky’s story, it would have produced it immediately. I gather that Hollywood’s Kings of Judah would take a meeting with the ghost of Yasir Arafat himself if they smelled money in it.)

Yes, there was more to the Soviet Union than the shapers of our American public opinion would like to admit, and we Russian-oriented paleocons owe it to ourselves, to our church, and to the Kremlin to “push back” against the jingo American narrative of the USSR as an “evil” undifferentiated behemoth. (I find that that this uncritically negative attitude towards Soviet Communism informs the work of even sensitive American critics, such as Ron Rosenbaum and the great James Wolcott.)

I wonder, for example, if we pro-Russian paleocons might not make inroads with sexual minorities by pointing out that the homosexual Tarkovsky was allowed freedom to work by the Russian authorities. By contrast, today homosexuals, like the magnificent Kevin Spacey, find themselves persecuted in Hollywood merely for engaging in that sort of convivial “horseplay” that has, going back to Attic days, always been the right of the gentleman among smooth-chinned ephebes. A paleocon-homosexual alliance—wouldn’t that be something to savor!

In the meantime, I commend readers to watch, if they haven’t yet, the great Andrei Rublev of the legendary Russian filmmaker Tarkovsky.