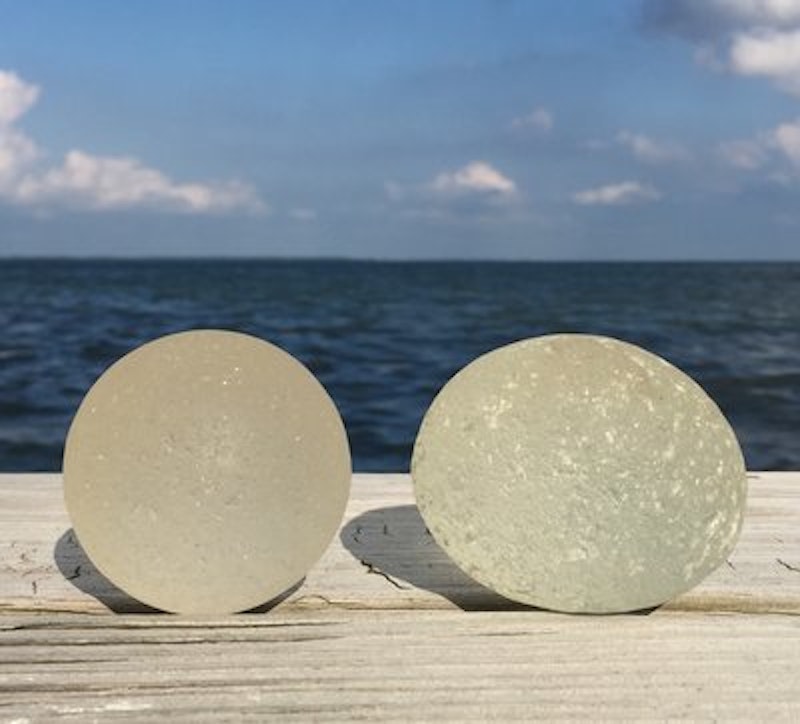 This past weekend I had the privilege of speaking and judging the sea glass contest at the North American Sea Glass Association festival. This association, whose mission is to educate collectors and consumers about pure, natural sea glass, requires that its commercial members “leave sea glass in its natural state and not create imitation sea glass; meaning that the sea glass will not be altered by, acid etching, sand blasting, tumbling, or by any other means so as to artificially replicate genuine sea glass.” In fact, if they don't abide by this, and show up with fake glass, they can be asked to leave the festival. “Craft glass” has its place at other festivals, but not at the NASGA event where it’s strictly forbidden.

There's nothing intrinsically wrong with (let’s just call it) craft glass, but the artists who create with genuine glass can't compete with those using those much less expensive materials. As long as vendors at other various regional sea glass and ocean arts festivals don't label their items "pure,” "genuine," or "wave-tumbled" sea glass it's not a huge problem because essentially they can use whatever materials they want. But consumers should know what they’re buying. Sometimes it can be easy for people to tell the difference between real or tumbled glass, and sometimes it can't, especially online.

The number in manufacturers of artificial sea glass has grown in recent years as demand for pure sea glass has increased and its supply has dwindled. Beaches are “overfished,” with more and more people hunting for sea glass; competition is stiff. Entire businesses have been created in which “sea glass” is being created nowhere near the sea by savvy individuals with a good working knowledge of what real sea glass should look like.

These new “manufacturers” trying to pass off fake sea glass as real go to a great deal of trouble to make the counterfeits look natural, and they're making a lot of money. Unlike the rock tumblers of the past that made fake glass easier to spot, they're using advanced tumbling, sandblasting and acid-washing processes that give the glass a similar appearance to real sea glass, and buyers think if they see the "c" marks and white-coated "frosting" layer on glass, it must be real, and this isn't always the case. The con artists are buying vintage glass (and marbles, perfume stoppers or figurines), from antique stores, putting the glass into cement mixers and in some cases into cages in the ocean and letting it tumble around for a period of time and then selling it online in Facebook groups, Etsy shops and on eBay as real sea glass.

I’ve been watching the sellers and obtaining samples of fakes from several different countries in order to put together a lecture and exhibit for sea glass shows next year so that collectors can see and feel the differences between the quality and texture. Feeling the glass in your hand is the best way to tell real from fake. In the above photo, a natural “boulder” from California (right) is beside a fake one sold from China (left). Even without holding them, one can see the difference between the two. The real sea glass boulder on the right doesn't have a perfect shape, and there are irregularities in the surface. Unfortunately, people are spending a lot of money on fake sea glass in many colors like the one on the left every day online.

Signs the "sea glass" you're buying online might be fake:

1. Does the seller only sell "ultra rare" colors in repeatedly the same colors?

2. Does the appearance of the glass have "too perfect" of a shape or a finish on it?

3. Does the seller keep selling similar batches of the same rare styles and colors and shapes of glass?

4. How trustworthy is the seller? Do you know them personally? The sea glass community is small enough that if you want to buy, often someone can point you in the right direction (whether it’s a Facebook group or reputable eBay seller) without having to buy from complete strangers. Only buy from people you trust.

5. If you’ve bought a piece you suspect is fake, does it feel unusually smooth compared to other pieces in your collection? Sea glass normally has a rougher texture to it after tumbling in the ocean. It shouldn’t have an odd perfect satiny sheen on it. This can often depend on which beach it comes from as sea glass surfaces depend on ph levels in the body of water.

6. Another way to spot sea glass that’s been in a tumbler is tiny diamond “glints” on the surface. If you turn the piece in your hand, often the tiny “cuts” will catch the light and will reflect in a diamond-like glinting fashion that pure sea glass generally does not.