Stalin looking into my soul. 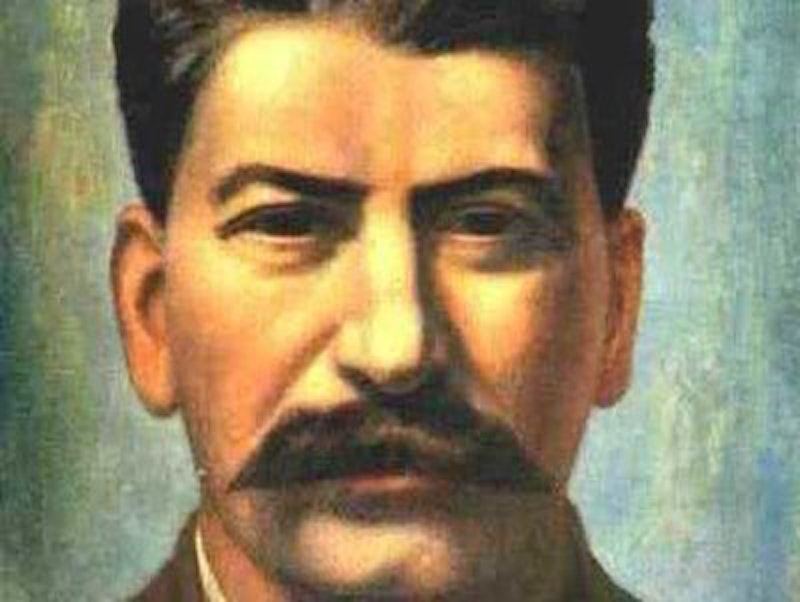 Our small Russian Orthodox mission church here in rural Indiana is facing a “tempest in a teapot.” At issue is the portrait of Stalin that our immigrant priest, Father Nicodemus, has placed on a stand next to the altar. The painting is the work of Father Nicodemus’ brother Zinoviy Mstislavovich, an amateur painter who still resides in the northerly Vorkhuta region in which the brothers’ Old Believer family has resided since the Orthodox Church’s tragic Schism.

I cannot say that the portrait is distinguished. It resembles any one of the official portraits of the late-life Stalin, smiling his enigmatic smile in his marshal’s uniform. The only difference is that Zinoviy Mstislavovich’s work lacks the lacquered perfection of Comrade Stalin’s official portraitists. On the other hand, it displays a certain rude gusto in its line.

One can imagine the surprise that we parishioners experienced upon assembling for mass Sunday morning and discovering this portrait, propped on its easel alongside the altar. It was disturbing to my meditations on the Virgin, the Theotokos, to come face to the face with the mustachioed visage of the “Red Tsar” every time I lifted my face from my groaning abasements. I had the distinct sense, probably common to Russians during the High Stalinist era of the Russian Empire’s greatest worldly glory, that he was looking into my soul, and knew more about me than I knew about myself. This was a peculiar feeling to have in church, where the worshipper is charged to acknowledge the all-seeing perspicacity of none other than God, the Father, Logos.

After mass, when we queried him about this peculiar addition to the altar, Father Nicodemus was his usual unflappable self. He answered that he had just received the portrait from his brother in the mail and had decided to display it in our humble house of the Lord in an admittedly oblique show of support for the Holy Orthodox Warriors of the Russian Army, who are currently massing on the Ukraine’s eastern border—from there, he hopes, to launch a bold blitzkrieg towards Kiev, where they will mass-murder the fascists of the anti-Russian Junta and behead the Banderite snake. Stalin, he explained, was a positive totem to these holy soldiers, and thus Nicodemus had felt compelled to display his portrait. But if the picture bothered us, he would take it down.

He also mentioned that his brother was raising funds to have his leg amputated, and that if we wanted to contribute a dollar or two, they—Nicodemus and his brother—would be grateful.

Well, the presence of Stalin on the altar did bother me a bit, and Brother Aiden, too.

“I understand that as converts to Orthodoxy we have to glorify the mighty Russian State,” Brother Aiden said to me later. “But Stalin? I could have lived with Brezhnev, or Kaganovich.”

I mentioned that Kaganovich would not have worked on an altar. He was a Jew.

But was it possible that our discomfort was a function of our own bigotry? We had both been raised in an environment of Americanist jingo Russophobia that had taught us to think the worst of Stalin. And certainly he had committed excesses. But so had Harry Truman, and we both admitted that the sight of Truman discomfited us not at all. Was our own lingering anti-Russian racism at work here?

Meanwhile, I fear the Stalin portrait has given ammunition to the enemies of Holy Russia, such as young Michael, the obnoxious Yale graduate in our community, whom I’ve written of in the past.

“Still praying to Stalin, Mr. Harris?” he brayed at me the other day. “Hey, maybe you guys should put up a picture of Beria, too. Me, I liked it better when all you horse-faced ex-Methodist perverts just prayed to Nathan Bedford Forrest, straight up. League of the South in 2017 bay-bee! Like Hank Jr. said: They’re a-gonna do it again!”

Off the snickering guttersnipe loped, apparently unaware that my blood is Hoosier, and Yankee, and that I am not now and never have been a member of the League of the South.