A day at the country fair. 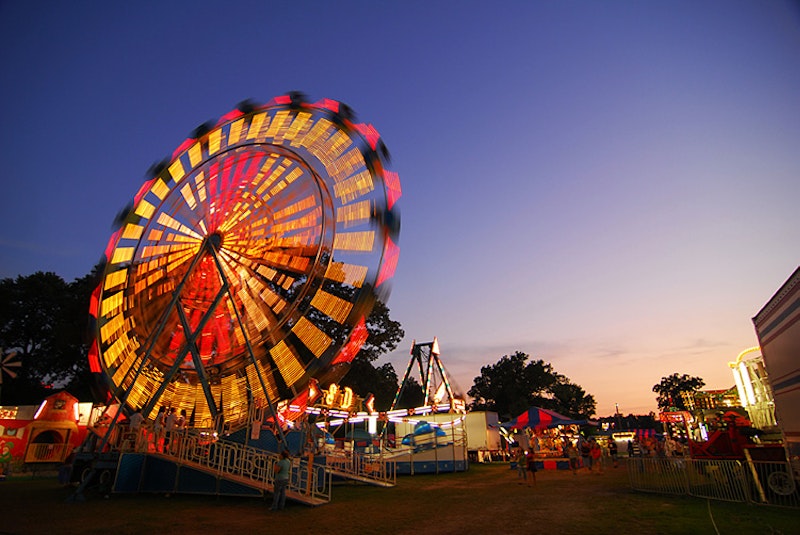 Best to keep your promises to the missus, but the weather on fair week almost made me a liar. I pledged to take Anj to the week-long fair and rodeo in Lynden, Washington. For the last three days of it, we were hit with the hottest snap of the summer. On Saturday evening, we finally made the trip, hitting up the art barns first to see paintings, Legos, and quilts. We then wove through booths to get to the games and rides area with one particular prize in mind.

It's not a kinky thing, I swear! They make great birthday presents! Every fair I try to score a pair of fuzzy handcuffs. You win them from that coin push game—the one where you aim tokens down a long spout. Coins land in front of a ram that pushes the tchotchkes and blue chips on a bed of tokens off the other side. Chips can be traded for plush animals, but I want to win the handcuffs. The challenge is to use your system to win them with the fewest tokens possible. This year: about $7 worth.

After that, it was a night for the animals. Many country fairs started as farming meet-ups. Lynden has stayed closer to its roots than most, joining the fair and rodeo into one big event a few years back. We walked through barns with horses, cows, sheep, goats, llamas, pigs, chickens, and one dog on a chair. It was too late for the rodeo but we did get to see one madman with a traveling exotic animals act. He laid a bunch of writhing rattlesnakes out on the stage, mere feet from the crowd. He got us howling with the wolves in a call-and-response format. He held a skunk in his arms and pretended to spray us with what turned out to be a bottle of water.

After a while we worked up an appetite. The plan was to get Chinese food and curly fries from separate booths. When Anj came back with the fries, her eyes were wide as saucers. She hadn’t been to a fair in years and had never seen a solid brick of curly fries or even considered that such a thing might exist. She had me place my hand next to the fries for some perspective when she posted it on Facebook. I’ve a funny feeling at next year’s fair those fuzzy handcuffs will have starchy competition.