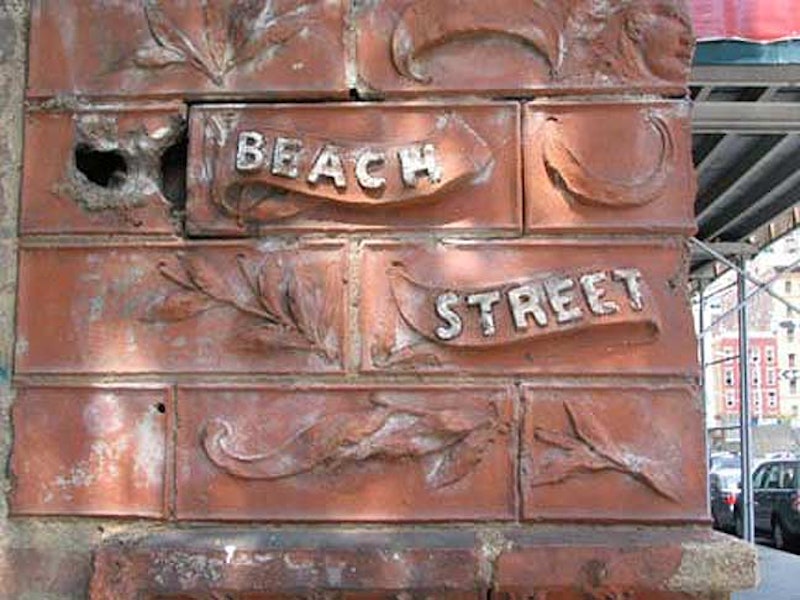 Beach Street is nearly forgotten among its neighbors in Tribeca. Two blocks between West and Greenwich were hacked off in favor of the Independence Plaza apartment development in the early 70s (depriving present-day New Yorkers, perhaps, of a monument commemorating the landing of the very first steam locomotive in America, the Stourbridge Lion, at the Hudson River and Beach Street in 1829; the train was able to reach the then unheard of human-powered speed of 10 mph). Sometime in the mid-20th century, the section of Beach between Hudson and Varick was renamed Ericsson Place.

Beach Street is not named for any nearby seaside recreational area but for Paul Bache, son-in-law of Anthony Lispenard, who owned much of the property in the area in the early 1800s. Ericsson Place was named for naval industrialist and inventor John Ericsson (1803-1888).

John Ericsson was one of the naval industry’s greatest innovators. Among his designs: the screw propeller; the first armored warship, the U.S.S. Monitor; and the rotating gun turret, first used on the Monitor.

Born in Sweden, Ericsson lived in New York City from 1841 until his death. The U.S.S. Monitor was built and launched in Greenpoint, Brooklyn.

Beach Street took Ericsson’s name because he lived here, in a building at 36 Beach Street, which, as Ericsson Place, now faces the off ramps of the Holland Tunnel but was then St. John’s Park, one of the city’s premier residential and recreational squares. He purchased a three-story brick house at 36 Beach, lived there until his death in 1888, and the house was razed in 1920. The story of Ericsson’s house doesn’t end there, however. For decades after its demolition, the ghost outline of John Ericsson’s house could be seen on the street named for him until it was finally covered by new construction around 2000. 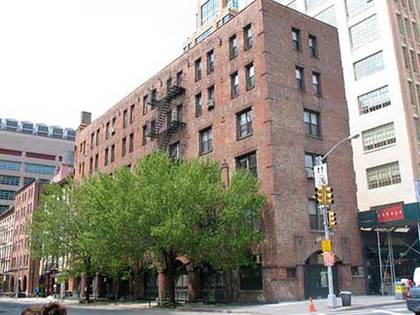 The star of the show at the northwest corner of Hudson and Beach is 135 Hudson. The AIA Guide to Manhattan says it was constructed in 1886 by Kimball and Inhen. (I know nothing about the company, but could Kimball have been Francis H. Kimball, the creator of some of NYC’s greatest buildings, including the Corbin Building on Broadway and John Street, the Montauk Club on 8th Avenue and Lincoln Place in Park Slope, and Edgehill Church in Spuyten Duyvil?)

From a distance it looks like a relatively simple square brick warehouse building but appearances deceive. 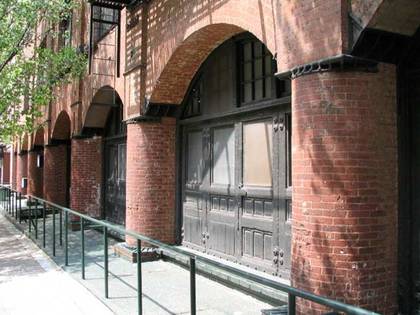 The Beach Street side is composed of a number of gorgeous brick arches. The AIA Guide points out the cast-iron impost blocks atop the round brick columns. This was just one of the clever touches that the builders of the Beaux-Arts era used to enliven otherwise drab structures. But the best feature of the building of all is right at the corner. 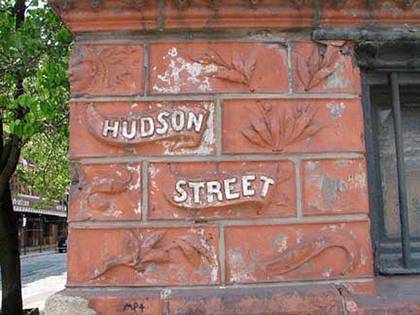 The builders left no doubt about the address, placing the two cross streets in brownstone tablets in carved banners. In the 1800s, street signs, as attachments to utility poles, were in their infancy, and the most common method was for the owners to chisel the street names the building faces on the facade, or to attach a metal sign bearing the name or names to the side of the building. On 135 Hudson, Kimball and Inhen employed uncommon craftsmanship to street identification, which remains in place to this day.