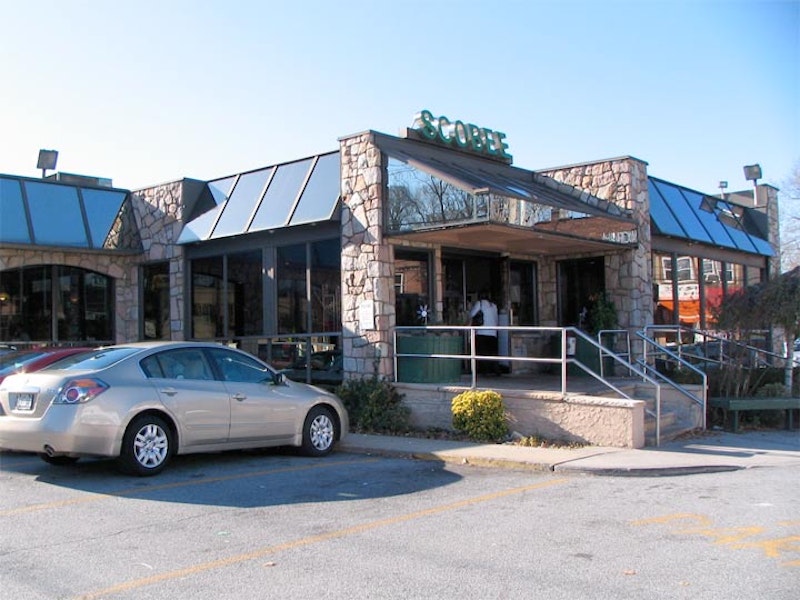 Word came this week that my local Stop & Shop supermarket in Little Neck, widely derided as one of the smallest in the metropolitan area, would close sometime in 2021. Little Neck has been dying a slow death since my arrival from Flushing in 2007, with the Little Neck Inn, Patrick’s Pub, the OTB on the corner of Little Neck Parkway and Northern Blvd., the Subway sandwich outlet, and a brace of Asian- and South American-themed restaurants all succumbing since I got here. Marathon Deli, across the street from the Stop & Shop, is hanging in, as does the local McDonald’s and the Shaffer Funeral Home, which never runs out of customers.

The death of the Scobee in November 2010 was painful. I considered it a home office away from my home office; I’d come in once a week, ease into a booth and watch the passing traffic while waiting for my order. This was when I still carried newspapers around and would lay one out on the table and take it all in. I’m a creature of routine and enjoyed ambling up Little Neck Parkway after work to the diner, whatever the weather. Once, there was a sour note when one of the guys asked me to vacate a boulevard-facing booth and relocate to the interior of the restaurant; apparently, they didn’t want passersby to spot single people sitting by themselves. Bad for the public image. I took this in stride.

I hear conflicting reports on how the place closed. The owners of the restaurant didn’t own the land, and when a lease was up, they were outbid. I also heard that the owners’ children were uninterested in continuing to run the place. The Scobee had begun as a railroad car diner after World War II and went through a variety of names and buildings before becoming the Scobee in 1960 and building its final incarnation, a chrome and glass creation, in the 1980s.

For years, it seemed the Scobee was worth more dead than alive as the building stood empty for four years, an empty lot for a couple of years after that, and it took another four for the new building constructed there to attract tenants. Currently, a Bean & Bean coffee franchise occupies the ground floor, the kind of place where people sit at lengthy tables, nursing coffee while tapping on laptops. 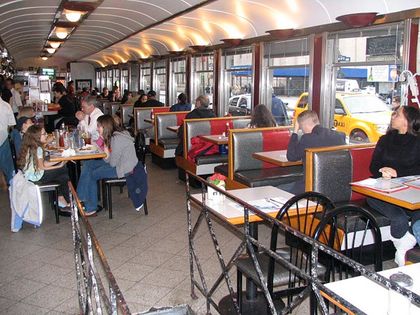 I’m not sure when I first visited the Cheyenne Diner, a railroad car-shaped chrome and glass diner formerly at 9th Ave. and W. 33rd. It was probably while I worked at Macy’s a couple of blocks away from 2000-2004. The Cheyenne Diner began as the Market Diner in this location sometime in the early-1940s. The diner manufacturer was Paramount Modular Concepts of Oakland, NJ, in business since 1932 and one of only a handful of diner manufacturers (Diner-Mite of Atlanta, GA, De Raffele of New Rochelle, NY, and Kullman of Lebanon, NJ are among the others) still in operation today; Kullman doesn’t seem to be making them anymore, however. The diner was re-named about 20 years ago for the Cheyenne Native American nation of the northern Great Plains, Montana and the Dakotas (originally from Minnesota).

Paramount was the first diner manufacturer to introduce an all-stainless-steel exterior. Paramount diners featured a distinctive curved roofline, and rounded glass block corners. Many of its earlier diners, such as White Manna Hamburgers in Hackensack, New Jersey, are adorned with a “wainscoating” of beveled vertical porcelain panels. In the mid-1940s, Paramount introduced the all-stainless exterior. Rosie’s Diner now in Rockford, Michigan is a glistening example.

With the demise of the Deerhead Diner on Astoria Blvd. in Jackson Heights in the early-2000s, and the closing of the Cheyenne, Paramount’s two most prominent local representative diners are now the White Mana on Tonnele Ave. in Jersey City, built in 1939 for the Flushing Meadows World’s Fair and moved to JC in 1946, and its cousin, the White Manna, on River St. in Hackensack, opened the same year. The JC White Mana originally had the extra “N” but an error by a sign repairer dropped it in the mid-1980s.

The Cheyenne, open 24 hours daily, was across the street from the massive James Farley Post Office and its 24-hour shifts. Mail processing has moved down the street to the Morgan Processing and Delivery Center on 30th St., and the Farley has been remodeled into the massive Moynihan Train Hall and offices of Facebook. The Cheyenne’s demise in 2008 was similar to that of the Scobee, as the diner owner’s lease expired. Its footprint stood empty for many years until a condo was constructed in its place. 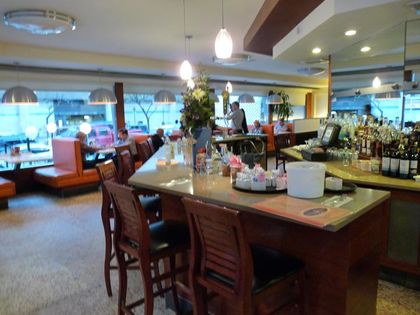 The Market Diner, manufactured by the De Raffele Diner Company and opened at 11th Ave. and W. 43rd St. in 1964, closed on Sunday, November 1st, 2015. The Market rented its space from a real estate company called the Moinian Group, which had purchased the plot in 2004 but hadn’t had the capital ready to build what it wanted all along: a 13-story mixed use building. Thus, the Market Diner was evicted.

The Market was the last of three diners in operation on 11th Ave. in recent history; the River Diner at 11th and W. 37th, where John Lennon once posed for a photo, left the scene about 25 years ago, while the Munson Diner at 11th and W. 49th, where scenes from the Seinfeld show were filmed, was uprooted and moved to the upstate town of Liberty, NY in 2005, but after reopening there in 2007, it couldn’t find a clientele and closed there, as well, in 2011. 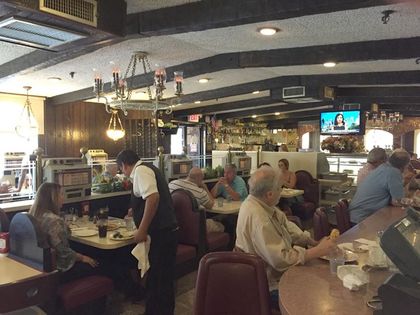 The Del Rio Diner occupied a wedge of territory on Kings Highway, W. 12th Street and Quentin Rd. It boasted a Spanish Colonial style, which the old Americana in Bay Ridge (7th Ave. and 65th St.) also used. In 2016 the diner closed after exactly 40 years. Scenes from the 2007 comedy film I Now Pronounce You Chuck and Larry and an episode of the television show Blacklist were both filmed at the diner. Del Rio tables have seen baseball’s Joe Pepitone as well as comedian Jackie Mason. 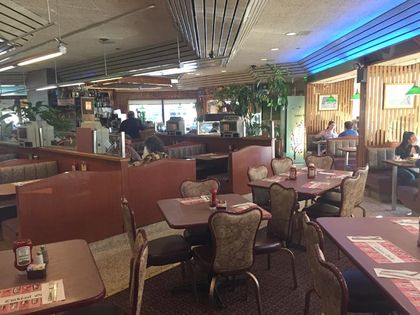 The Vegas Diner, about a mile away on 86th St. off 16th Ave. in Bath Beach, was owned by Larry Georgeton, the Del Rio’s owner, who kept it going until it also succumbed to changing tastes and demographics in 2017. An Asian restaurant now occupies its former building, a fate that also befell Zeke’s Roast Beef, a Bay Ridge favorite of mine. The Vegas had been relatively new, opening in 1982.

I made sure to visit all these diners a final time before the inevitable. There are still dozens of quality diners around NYC. About 15-20 times a year I conduct tours based on my website, Forgotten New York, and whenever feasible, we repair to a local diner if we can find one at tour’s end.

When you cut a diner out of a neighborhood, you cut out its heart.