Who Will Step Forward to Piss on the Navalny Protests?

I wonder if the issue with my right-wing peers isn’t simply tedium. 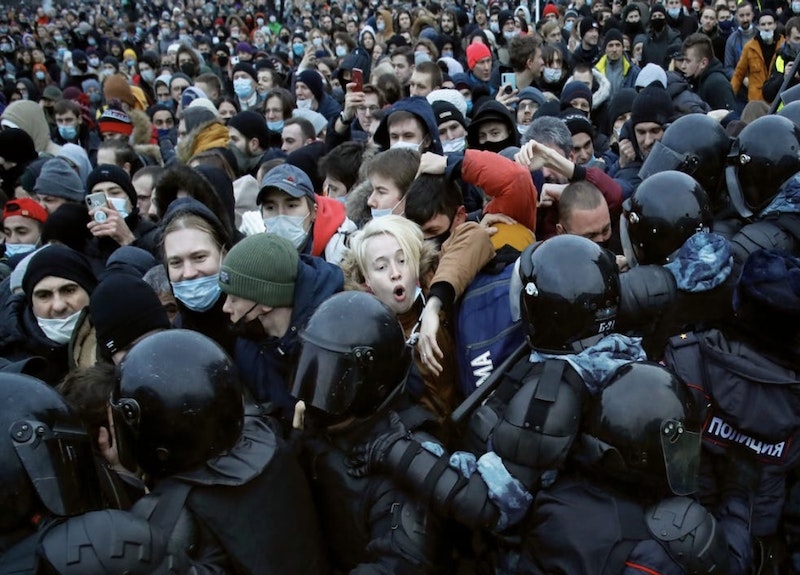 “Blue Monday” has passed and my winter mood has improved dramatically. The fact is that the last 11 months, bad as they’ve been globally, have been fine as far as I’m concerned. “Lockdown” has, if anything, offered me a welcome excuse to wallow in my introversion and my asocial proclivities. It’s been quite cozy here at the homestead with Mother, Brother Aiden, and Sister Marie.

It’s also been nice to receive the two deposits of Federal “stimulus” money in my bank account. Since we support ourselves here with small-scale organic farming and by the occasional freelance legal jobs that I perform (I retain my membership in the Indiana bar), that money has made a difference.

Near the onset of the pandemic, my fellow Russian Orthodox intellectual Rod Dreher wrote a lunatic blog post in which he asserted that we’d all soon be poor, sick, or dead, and that there was no escape from our fate. But in late-January 2021 I find myself a bit richer than I was a year ago, in relatively good health for a sixtysomething man with chronic conditions, and unambiguously among the quick, as opposed to the dead.

For this I offer thanks to God and St. Anastacia Nikolaevna Romanovna.

It’s surprising to me that no one from the paleocon intellectual community has yet stepped forward to pour cold water on the pro-Navalny/anti-Putin protests currently ongoing in the Russian Federation. We traditionalist-right thinkers exist, after all, to belittle and dismiss phenomena that diminish the Kremlin in its holy majesty and authority.

And yet, this time around, at least when it comes to the voices with which I’m most familiar, there’s silence. I wonder if the issue with my right-wing peers isn’t simply tedium. The tedium, that is, of this long-running sporadic series of anti-Putin protests, which seem to issue in nothing: in neither a complete Putin regime victory, nor in (thank God!) any noticeable degradation in the admirable regime’s authority.

And yet tedium is no excuse for shirking one’s duty. If no paleoconservative icon—such as Dr. Daniel Larison, the legendary Yale academic, Russian Orthodox theologian, and American Conservative blogger—steps forward soon to “piss on” the pro-Navalny movement, I just might have to do it myself.

I’ll sally forth on an Indiana morning with the flap of my Jockey shorts maximally agape and my exposed “pecker” pinched firmly between thumb (on the shaft’s top flank) and index, middle, and ring fingers (on its bottom flank) to effect the necessary desecration. I’ll then publish a crackerjack anti-Navalny-protest post, one that hits all the classic right-wing beats.

The protests, I’ll remind readers, are insignificant, trivial, nugatory—a matter of a mere hundred thousand CIA-supported malcontents in a gigantic country that stretches over 11 time zones to the Pacific. They in no way represent the sentiments of the glorious Russian common man, who sits content in his khrushchyovka apartment in the deep-frozen “bedroom regions” around Perm, shuffling around in his tracksuit and soccer slippers, rubbing his belly, gorging on fried potatoes for lunch and dinner, dreaming of turning his old Lada in for a new Skoda, wondering when the communal property authorities are going to turn the running water back on, and giving daily thanks to the Putin regime in its beneficence. This “middle Russian” has zero to gain from liberal change in his country and everything to lose—and in his deep, quiet, demotic wisdom he knows it.

At the same time, I’ll be sure to make clear that the protests are, though completely meaningless, also deeply concerning. This is because they shine a light on that dismal alliance of liberals, atheists, “Westernizers,” Soros-underwritten reformists, homosexuals, transsexuals, polymorphous omnisexuals, neoliberals, libertarians, literary intellectuals, and other filth leagued against 100 percent Pure Russianism as embodied by Putin’s Kremlin.

I’ll close with some trenchant snuffling about the witchery of the Victoria Nulands and Anne Applebaums of the world—those subtle sorceresses possessed of an eldritch power to hypnotically compel Slavs to turn out into the street to protest against their own interests and, indeed, against their own will.

Watch this space for developments!