In Hawaii, The "Waterman" Reigns Supreme

It's about an ethos of living in harmony with the ocean. 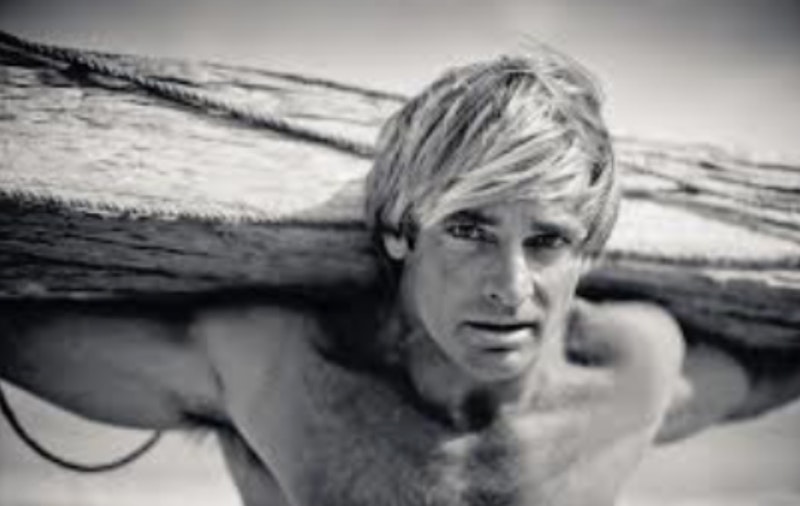 One evening, while drinking beer at my neighborhood bar on the island of Maui, I was enjoying one of the surfing videos that they often played on their TVs. This particular one featured the famed Hawaiian surfer Laird Hamilton (né Laird John Zerfas) riding a giant wave; it was spectacular. At one point, I turned around, and saw that the revered "waterman," all muscle and chiseled features (he became a model at age 17), was standing just behind me, over my left shoulder. It's one of those coincidences that you never forget. I didn't say anything to the big-wave surfer. I'd already learned a lesson several months prior to this evening after trying to strike up a football conversation with my sports idol, Joe Montana, in a nearby bookstore—he blew me off. Hamilton, unlike Montana, is known as a down-to-earth guy; plus he was born in Hawaii, so he probably wouldn't have done that to me. But I was done with trying to chat up celebrities.

The concept of the waterman looms large in Hawaiian culture. To earn that distinction is an honor on those tropical islands, where the Pacific Ocean dominates the collective consciousness. Waterman is a proud title referring to a person who’s fully in tune with the ocean. The sea is the waterman's second home. He's as comfortable with waves washing over him as he is sitting on his living room couch.

Waterman activities include surfing, bodysurfing, bodyboarding, kayaking, paddleboarding, rowing, fishing, sailing, kiteboarding, windsurfing, scuba diving, and freediving. The choice of activity is often dictated by weather and ocean conditions. If the surf's "blown out," meaning the wind has made waves that would normally be good too choppy to ride, the waterman will kiteboard, windsurf, or sail. If there's a "shore pound"—when the waves are breaking very close to the beach—the waterman will spearfish for his dinner or take the outrigger out on the water. Natural conditions aren't barriers to ocean activities; they just present unique opportunities. And short of a tsunami, no natural condition in Hawaii will keep a waterman out of the Pacific. This attitude is reflected in a slogan all Hawaiians grew up on—"Eddie would go"—referring to fearless surfing icon, Eddie Aikau, who braved all kinds of conditions in the course of saving around 500 people when he worked as a lifeguard at the North Shore in the 1960s and 1970s. Aikau died, at 32, while attempting the most difficult rescue of his life.

Laird Hamilton, an international fitness icon, gained his fame via surfing, but his other waterman activities includes windsurfing, waterskiing, kitesurfing, and stand-up paddleboarding. He once windsurfed the 50 miles separating Oahu and Kauaʻi in just under six hours. He's crossed the English Channel on a paddleboard. In 1995, Hamilton commuted daily from Maui to the Big Island by jet ski in order to play Kevin Costner’s stunt double in Waterworld.

Hamilton's specialty is tow-in surfing, which he's the co-inventor of. Tow-in surfing involves a jet ski towing a surfer out to a wave so big that it’s nearly impossible to ride by paddling out to it. The most renowned spot in Hawaii for this extreme variety of surfing is the Maui mega-surf break known as "Jaws," where wintertime waves can be up to 80 feet high. This surfing spot is located in a remote area reachable only by four-wheel vehicles. Getting to the viewing area, which I did on a number of occasions, requires a one-mile walk, but it's worth it. Hamilton, using a surfboard equipped with foot straps, was the first surfer to be towed in to Jaws.

As the waterman (there are waterwomen too) is a high-status individual in Hawaii, many want to claim the title. But who determines the few who receive the designation? There's a "Hawaii Waterman Hall of Fame," but you don't get into that until you've reached a fairly advanced age, or have died. There's no waterman test you can take to qualify. Combine the resulting vagueness with the fact that the term's become the aspirational descriptor within the surf-centric culture, and you get some predictable results. There are the guys who, after reading balance sheets all week in their offices, go windsurfing on the weekends and try to come off as watermen. Others think they can buy their way into the exclusive club with the purchase of pricey equipment that's pushed by hyped-up marketing campaigns seeking to profit by co-opting a lifestyle that's considered cool.

The waterman ethos revolves around a set of practices rooted in history and heritage. Watermen can do anything that can be done in the ocean, but the concept transcends mere activities. Those activities are the byproducts of a mindset in which the ocean is central to your existence. There are subtle skills involved—skills you won't learn about via the media and corporate hype surrounding the term. Watermen can dive in the ocean and use their ears to determine if there are big rocks and boulders nearby. They can taste the sea water and discern that some fresh water is feeding into that area. If you tell a waterman that you lost your paddle, he'll ask you how long ago you lost it and can probably tell you where it is now.