Allowed to Grow Old is an excellent photography book documenting elderly animals in all their sundry miseries and moments of grace. 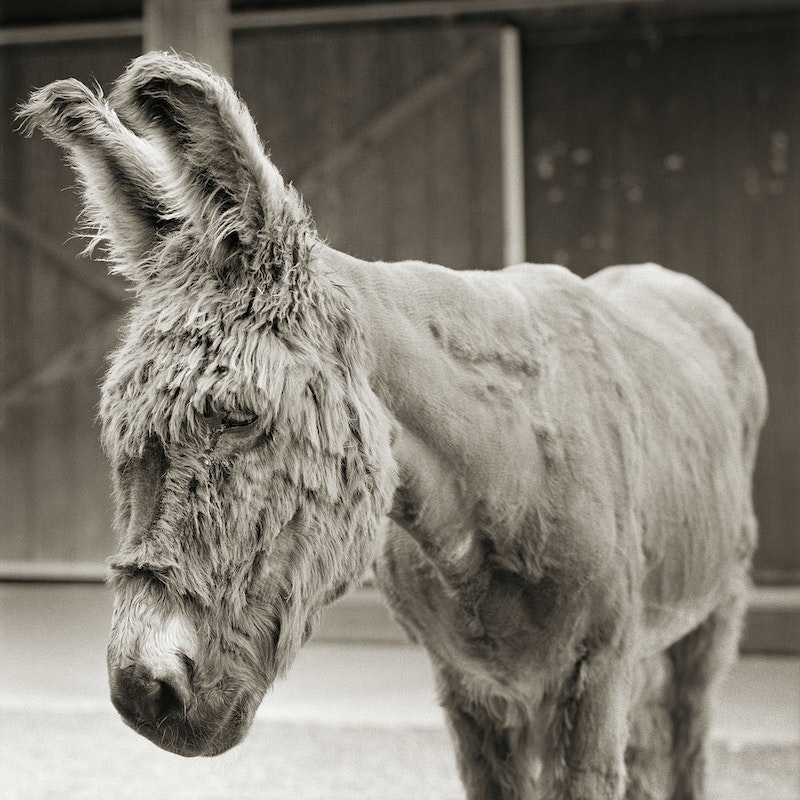 Isa Leshko's first book is a moving collection of photographs called Allowed to Grow Old: Portraits of Elderly Animals from Farm Sanctuaries. The project began as a therapeutic exercise to address her fear of dying, but over time it became more political in nature. Leshko hoped the images would allow viewers to see animals as more than just commodities.

"Roughly fifty billion land animals are factory farmed globally each year," the photographer said. "It is nothing short of a miracle to be in the presence of a farm animal who has managed to reach old age. Most of their kin die before they are six months old. By depicting the beauty and dignity of elderly farm animals, I invite reflection upon what is lost when these animals are not allowed to grow old."

As the book's title makes clear, her subjects were rescued animals on farm sanctuaries. Leshko went to significant lengths to make sure they were comfortable with the process. Besides photographing the animals in their own environment, she used only available light and spent days in her subjects' presence to build trust. The results are portraits with a surprising degree of intimacy.

"Most of the animals who appear in this book passed away within six months to a year after I had met them," Leshko said. "On a few occasions, an animal died the day after I photographed her. These deaths are not surprising given the nature of this project, but they have been painful nonetheless... Grief initially inspired this work, and it has been my constant companion as I have worked on this book."

She felt a special connection to particular subjects. One creature was a blind turkey named Gandalf, who lived at Pasado’s Safe Haven in Sultan, Washington. His appearance and behavior reminded Leshko of her late mother, who suffered from Alzheimer's. Caring for her mother had inspired Leshko to work on the project in the first place. "Gandalf—like most turkeys—cooled down by breathing with his beak open," she wrote in the book. "His empty gaze coupled with his gaping mouth transported me to my mother’s bedside during her final months, when she was catatonic. I fled Gandalf’s enclosure in tears after spending mere moments with him. It took a few more visits before I was finally able to see Gandalf and not my mother."

While working on the project, both of Leshko's parents passed away. Two of her cats died from cancer and a friend was killed in a tragic accident. While the aim of her work changed—and became less a meditation on mortality and more a commentary on factory farming—she found some relief when it came to her fear of death.

"Spending time with farm animals who have defied all odds to reach old age has reminded me that aging is a luxury, not a curse," Leshko wrote. "I will never stop being afraid of what the future has in store for me. But I want to face my eventual decline with the same stoicism and grace that the animals in these photographs have shown."

Allowed to Grow Old has received favorable attention from critics. It was included in The New York Times Holiday Gift Guide and BuzzFeed named the title one of the best photography books of 2019.