Putting Christianity Back Into Animal Welfare 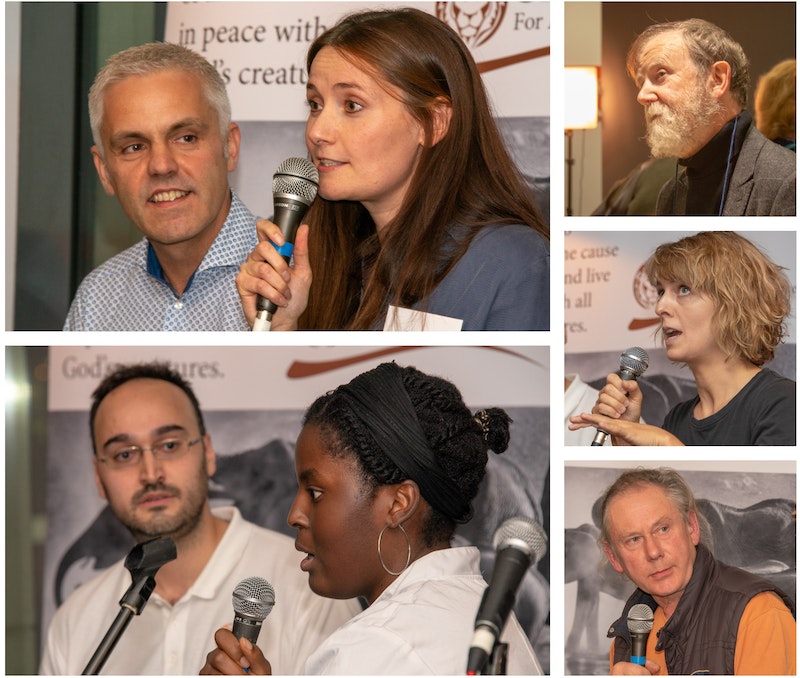 Daryl Booth, an evangelical pastor, is the founder of a Christian animal welfare group called Sarx. Based in the United Kingdom, Sarx gives church presentations, campaigns against animal cruelty, and manages a robust digital presence. I recently interviewed Booth about the organization.

Splice Today: Where did your group's name come from?

Daryl Booth: We chose the name “Sarx” because, in the first chapter of the Gospel of John, it’s written that "the Word" (God) became flesh. That is to say, God became flesh in the person of Christ. The word flesh, or sarx in the original Greek, describes both humans and animals alike. In becoming flesh, Christ comes alongside the creatures He loves and shared many experiences that are common to animals across a wide spectrum of species including hunger, happiness, sickness, pain, bereavement and fear. With our fleshly bodies and capacity to suffer being something that Christ, humanity and animals all share in common, the name Sarx gestures towards our identification with animals.

ST: What does your organization hope to achieve?

DB: The UK has long been considered a nation of animal lovers and millions of Christians are among these ranks. Yet like other British interests such as football (soccer), Doctor Who and tea and crumpets, animals are rarely thought of as a faith concern that we expect to hear discussed within church. Today's Christians confess faith in Jesus Christ. They’re often proud animal lovers. But they don’t often put the two together.

For people who attend churches that proclaim Christ’s love but don't consider extending this love to animals, this can be puzzling and frustrating. This is especially the case when the wider country seems to be regarding animal issues with great importance, as evidenced by the meteoric rise in veganism in the UK. Sarx exists for these people who want to creatively explore animal issues as prime faith issues. We encourage people to take positive action in their lives, within their communities, and particularly, on their plates by transitioning to veganism.

ST: Did Jesus eat meat? Does it matter?

DB: That's a common question. As to whether it matters, it depends on why it’s asked. This could be a very meaningful question if asked by a Christian who wants to faithfully follow in Jesus' footsteps. On the other hand, it’s much less useful if it’s merely a defensive question that’s intended to uphold a meat eater’s mental equilibrium. The questioner needs to ask if they’re looking for answers or an alibi. But did Jesus actually eat meat? The answer is "yes and no."

Yes: He likely consumed the Passover because it was a religious duty and he probably also supplemented his diet with fish (this was often a necessity for those living in arid 1st-century Palestine without the benefits of modern agriculture). There’s no evidence that Jesus ate "secular" meat, that is to say animal flesh consumed for non-religious purposes. This meat, while allowable under the law, is regarded unfavorably within scripture and was often shunned by holy men. In its original Hebrew, the language of Deuteronomy 12 associates the permission to kill and eat animals for non-religious reasons with lust, wickedness, law-breaking, rebellion against God and the Fall. Even today, some Jews continue to refer to this meat as “the meat of lust.”

No: When we say the word "meat," we’re making reference to something that simply didn’t exist during the time of Christ. For us, "meat" is eaten neither for nutritional necessity or religious obligation but rather is produced for the profit of the seller and gastronomic pleasure of the consumer. When we walk down our supermarket aisles, we see the flesh of cows who were forcibly impregnated, their newly born torn away, were mutilated and kept in filthy, overcrowded conditions. When we see a chicken in the freezer section, it’s the body of a bird bred specially to experience no cessation of hunger. These perpetually hungry animals, which reach slaughter weight at just 35 days, put on weight at a rate massively disproportionate to what their young bodies can handle. Broken legs and lameness are a common occurrence among these animals who suffer the horror of intensive farms before being bundled roughly into crates and driven to have their throats slit. Such horrors were unthinkable during the lifetime of Christ.

Maybe, as we peruse the supermarket aisles, Christians should ask ourselves a different question. For us, who aren’t living in first century-Galilee but rather in a time and country when meat eating necessitates terrible suffering and the devastation of the environment, perhaps the key question to ask is, “What would Jesus have us eat now”?

ST: What do you say to activists who believe Christianity is fundamentally hostile to animals?

DB: Well, I can hardly blame them. I’ve met many Christians who believe their faith to be hostile to animals! Unfortunately, contemporary, mainstream Christian culture has largely failed to treat animal issues with the importance they deserve. That said, this wasn’t always the case and some of the most passionate animal advocates of previous generations were people of faith. Baptist minister Charles Spurgeon (1834-1892), one of the most influential Christian leaders of his day and who in later life became a vegetarian, wrote: “The man who truly loves his Maker becomes tender towards all the creatures his Lord has made. In gentleness and kindness our great Redeemer is our model.”

Dedicated Christian William Wilberforce (1759-1833), champion of the abolitionist movement and celebrated for his tireless dedication to that cause, was also a staunch animal advocate who lobbied the UK parliament to enact the first animal welfare legislation. He also co-founded what was to become the Royal Society for the Protection of Animals.

Founder of the Methodist church, John Wesley (1703-1791), was a vegetarian and renowned for his devotion and generosity to the poor wrote: “I believe in my heart that faith in Jesus Christ can and will lead us beyond an exclusive concern for the well-being of other human beings to the broader concern for the well-being of every living creature on the face of the earth.”

ST: Does the modern animal movement lose anything with its largely secular presentation?

DB: Not necessarily. The urgent task of showing justice, compassion and love to animals is one that anyone can embrace regardless of religious belief. Many of today's animal rights movement pioneers have had no religious affiliation yet Christians have much to be thankful for to these folk, since they have brought the issue into the mainstream, and helped alleviate suffering and bring about justice for animals.

I believe it’s the task of our generation of Christians to recapture their heritage of animal advocacy and work with people of all faiths and none to champion the cause of animals and promote peaceful living among all of God's creatures.