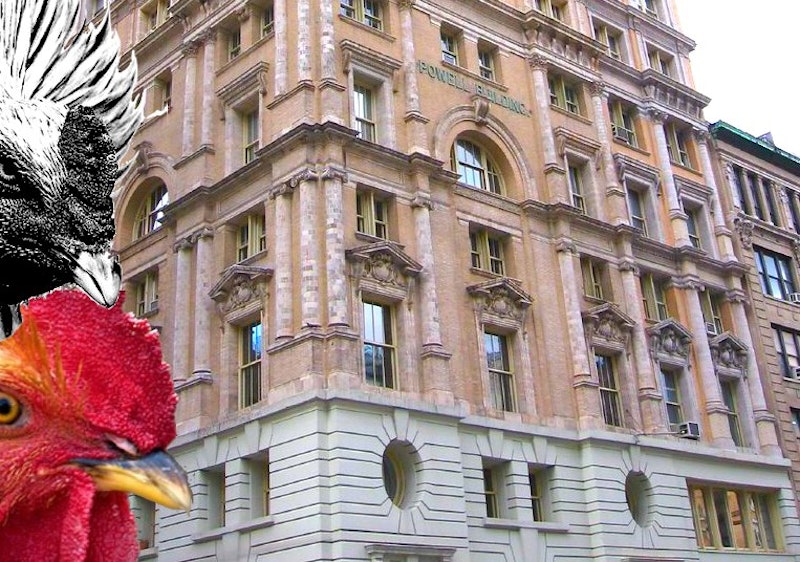 Rumors of Bennington’s unnatural, immoral, and often illegal behavior became published fact earlier this spring, when this website published a 10-part series by my cousin titled “Bennington, Unchained.” First of all, racist. Second, unoriginal. Third, that cost my wife and me 10 weeks of work, and we’ve had no opportunity to make it up with these south-of-the- border bums who will apparently publish anything. It’s crazy. Interstate travel between the Northeast and the Mid-Atlantic should be illegal, if you ask me. But I’m not a doctor.

If I were, I’d give my cousin Bennington a checkup, because he needs one—badly. Do any of you believe any of the lies he wrote? About being in Ohio, near a train wreck, under the subway system in New York in some kind of rodent cantina? I don’t. Then again, it’d prove that he has some grasp on the rudiments of fiction, which have always escaped me. If that’s the case, I don’t want him to come back. I’m too jealous. I get that way whenever anyone around me experiences success. But it only really hurts when it’s a writer friend, like Bret Easton Ellis, who stopped returning my calls around 1987 (I’ll only add that I enjoyed the coverage of his most recent book White, and his interview with The New Yorker’s Isaac Chotiner. Well played, fellow ally).

Maybe if Benny came back, we could collaborate. We tried once, sometime in the mid-1990s, right around when David Foster Wallace’s publishing company was sending out those postcards with weird, pretentious pull quotes on them with pictures of blue skies and white clouds. I told Bennington we could skip the hard part—no one wants to read 20 pages of a book, much less 1000—and just write four dozen or so “turns of phrase,” or in the French, “essayer de paraître intelligent.” These koans we wrote presaged Rupi Kaur by at least two decades, and even though we didn’t bleed onto any of them, the postcards were a reasonable success, but as soon as Infinite Jest came out in February 1996, our con was through. There’s nothing worse than getting a spot at the table, only to be thrown out a moment later.

Inside, our cover was blown, but we thought we could still make it in the underground publishing world. Not so: when Benny and I contacted Amy Sohn of New York Press, she refused to talk with us—“too loud,” she said. Um, wow. You know what I could say. And you know what I’m thinking. It was a rude comment, nonetheless. She hung up the phone, and I was down—I thought we’d have to go back to working as rent-roos for all the Beat poets that were still alive (Ginsberg—good Lord, you’ve never seen a man so depraved. But so kind as well. I wonder if he’s still around, I should give him a call…).

But then Benny came through in a pinch. That’s always been his specialty: being a nuisance and a burden and an asshole and an all-around emotional mess, but sometimes he does something smart and it’s really cool. That’s all he’s good for, honestly (between you and me). “I have Russ Smith’s number. His home phone number.” This was incredible. How could he refuse us now? “They live in the Powell Building,” Benny told me as he put another couple quarters in the payphone. We were on Canal Street, not far from where we’d end up…

Bennington looked down at me. “It’s his kid!” I told him to keep talking.

“Oh, congratulations. Where is your father? I need to speak with him.”

“Are you one of my uncles?”

This was amazing. Bennington and I danced all the way down to Tribeca, grabbing watermelons with our beaks and smashing them onto the hoods of every taxi that passed, just for the spite of it, and we even stole flowers from a deli called Morgan’s on the way. Oh, it was right outside! The little girl told us where to go: big half circle window, sixth floor. Imagine our surprise when a tall, thin man wearing a smart pin-striped suit, cufflinks, and a tie addressed us on the steps of the Powell Building. He was waiting. He asked what we wanted, and why we talked to his “son.”

Well, I was honest—but Bennington wasn’t.

“Sir, I can explain,” I began, “we’re writers, and we’re huge fans of the Voice—” Then Benny cut me off for no reason: “Mr. Smith, we believe that New York Press represents the vanguard of not only alternative newspapers in America, but newspapers at large. You’re The New York Times for the mentally ill and criminally insane.”

I thought that was a pretty good sell, but it didn’t work. He told us if we ever called his house again, or ever did anything to his kids, he’d murder us in cold blood. “I wouldn’t even grant you the honor of being used as meat: if you ever come here or call here again, I will cut both of your throats with this pocketknife and throw your bodies in the street. You’ll be run over and mutilated like the cockroaches that you are. Leave now. Not even I can accept a talking fucking chicken writing for me. Much less two.”

After that rather bigoted remark, I didn’t want to write for him, either. Imagine my surprise (again) when Mr. Smith contacted me in 2015 to begin writing for this website. I wonder if he remembers our run-in around 1997. Maybe not, but now? Perhaps still a mystery…

I’ll end with a certainty: Bennington will not be compensated for his work on this piece. I haven’t seen him in months and I hope to never see him again. He’s banished from our lives, and I hope that you and the rest of the world do the same. He is a cancer. And even if you don’t like me, at least I tell the truth.