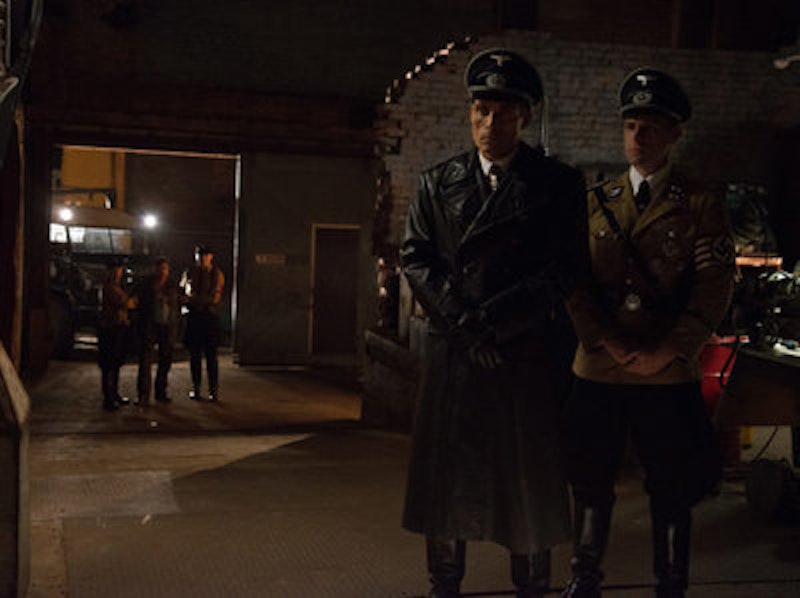 “So this is what they’re sending me now. How old are you?” Said by a beefy guy who’s a leader in the resistance. Plus: “How do I know you’re not a spy?” Warning about torture: “You tell Johnny Jackboot out there my name or just about anything else he wants.”

The hero, after a speech: “So you gonna give me the job or not?” He’s flaring up, righteous in a pipsqueak style. The actor’s a young fellow, well-knit, with a broad chin.

Dojo, or something. White mats. Light like a high-class coffee ad’s idea of morning. Wise master speaks to vanquished combatant: “Only your ego is bruised.” The combatant was beaten by the heroine, who’s tall and has a broad chin and broad cheekbones.

Battered apartment. Weary-survivor mother and step-dad. Mother to heroine: “I don’t know why you love the Japs so much. They killed your father.” Expository dialogue exchange, including brief character-setting moment for step-dad. Followed by: “Go? You just got here!”

The girl is off to see her boyfriend, who has geek glasses and a retractable chin. Seen three-quarters on, he’s lit like a stud TV lead. In profile, he looks like a goober who never grew the lower half of his face: a librarian, a clerk, some schmuck. “Get married?” he pleads to her. “Raise kids.” Another line: “I’m always proud of you.”

The girl and her broad triangle of cheekbone and chin are tilted toward higher things. “Aikido is the exact opposite of the men who killed my dad,” she says. Still, she’s capable of recapping. “I don’t know what I would have done without you. After the accident you got me back on my feet.” Her chin is bigger than either of her cheekbones.

Beefy guy tortured. Vulpine SS inquisitor: “This is the symbol of your movement, is it not?”

Heroine flees secret police. Chatty woman on bus: “What brought you to the Neutral Zone?”

Boyfriend returns to empty apartment: “Jules? Jules?” The secret police knock. The phone rings while they talk to him. Young officer, menacing and off-hand: “Aren’t you going to get that?”

A German and Japanese honcho meet in secret. German honcho: “You seem burdened, Mr. Tagomi.” Japanese honcho: “Fate is fluid, Colonel Wegener. Destiny is in the hands of men.”

Nazis talk to each other. “You seem very well informed, Oberfuehrer.” Sternly: “The Fuehrer is not inclined to idle obsessions.”

The heroine is rescued by the young guy in a battered mid-continent diner. The light is bleak. His chin is expansive; one notices.

At the episode’s finish there’s a twist that I didn’t expect, but others might see it coming. Along the way the plot springs some holes. The young man drives across half the continent in a truck painted with the name and logo of a business that the authorities just raided; no one seems to realize that the authorities aren’t pursuing this clue. For her part, the heroine first views the film reels immediately after soldiers swoop down and kill her sister. The sister passes the heroine the reels as the soldiers close in, and the heroine runs home and sets up a film projector in her living room so she can screen the film; that was in the interest of keeping a low profile. One suspects that the script was written with the sister handing off a flash drive. Then somebody made a note, but the rewrite never got far.

Two touches of artistry stand out from the episode. The herbalist shop’s set decoration is masterly. And a bit player (try to find him on IMDB) appears as an amiable old state trooper, a smokey with a swastika on his arm. The smokey says the age-old line, “I will need to see your transit papers.” Read those words and it’s hard to hear them without a German accent from an old movie. But the actor makes them sound off-hand and good-natured. When he says them, you have to remind yourself how they match the cliché.

Otherwise… You seem troubled, episode viewer. Yes, I keep thinking of that boy’s chin. I think it’s a planet.