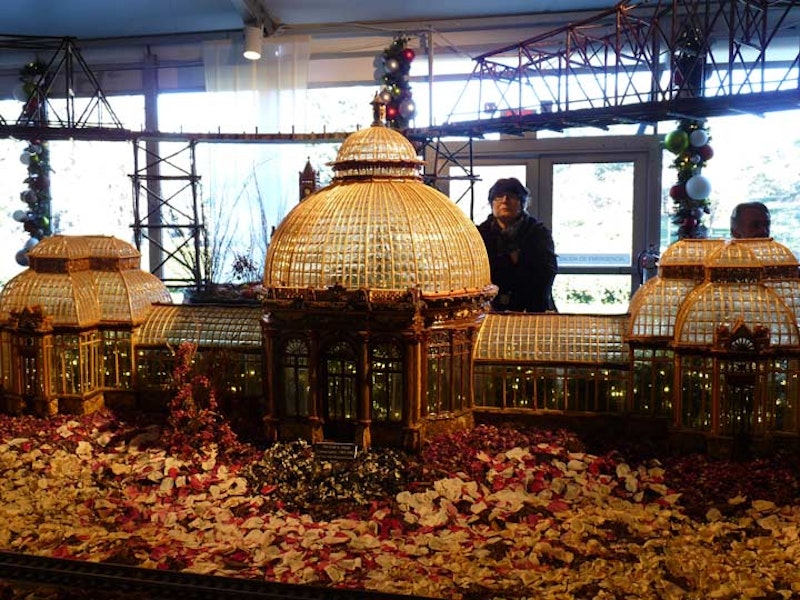 I’ve mentioned before on SpliceToday that my father and I operated model train sets during my childhood. Our brand of choice was the Aurora “Postage Stamp” brand of N-gauge trains, the smallest on the market. Typically, we would set up the trains so that they ringed a small town we set up on a portable aluminum table that was also pressed into duty when we had company and needed to serve meals for a larger crowd. One of our weekly rituals was a visit to Walt’s Hobby Shop, which in the '60s was on 4th Avenue and 86th Street in Bay Ridge; Walt later moved to 5th Avenue.

Not only was I obsessed with the model trains but also the accessories, the small plastic trees, houses, and even lampposts that we employed to set up our small town, as I was obsessed with trains in the form of the subways and els we traveled on in Brooklyn but also the brand new Verrazano Bridge and Gowanus Expressway which were under construction across the street. We were limited in our model railroading, though, by practical considerations. One was dust. Our setup attracted dust like flies to sherbet and frequent (gentle) vacuuming was necessary. We also needed that aluminum table from time to time, as I have mentioned, and the model trains were packed off to our apartment house basement, from which two such sets were pilfered. That pretty much put an end to any serious model railroading we were thinking about doing.

Still, the trains never were far from my mind. Till my mid-teens, I attended the annual exhibit given by some real Brooklyn model rail mavens. The Bay Ridge Model Railroad Club, in a basement on Oliver Street; their spread took up an entire basement and was accompanied by the construction of an entire mini-city. The club kept going until just recently, I read.

Both the NYC Transit Museum in its Grand Central location and the New York Botanical Garden in Bedford Park in the Bronx, have annual exhibits during and just after the holiday season every year. The Museum’s spread is small but impressive in its rather cramped quarters, but the NYBG’s, held in its Haupt Conservatory and greenhouse, the model of which is shown above, is a comprehensive view of NYC architectural history. If you’re a train buff, you can attend for that—and if you’re also an infrastructure buff it’s ideal as well.

The NYBG show incorporates dozens of famous (and not so famous) NYC architectural highlights, constructed from twigs, leaves, bark, berries, and other natural materials by Paul Busse and his team at Applied Imagination at Alexandria, Kentucky. The show takes months to prepare and build—work for next year’s show begins almost immediately after this year’s is dismantled. The NYBG uses G-scale, mainly used for outdoor shows; the G stands for the German word groß, “large.” No matter how cold it might be outside, the Haupt is a greenhouse and features tropical plants (NYBG’s orchid show is also held here) and the air feels like Miami in August. Your $20 is well worth it—$15 if you prove NYC residency. Here’s just a few highlights from the show. 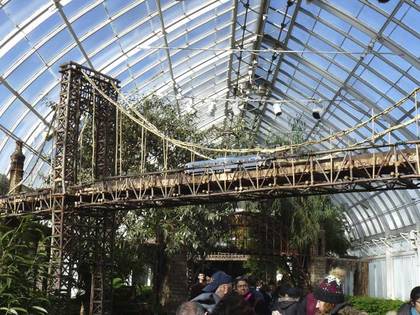 Busse took some liberties with the George Washington Bridge in showing a transit line crossing it (it never has had rail of any gauge). The GWB, opened in 1931, was originally going to be clad in stone and its engineers were going for a Brooklyn Bridge-esque look. Soon after construction started so did the Depression, and its engineers led by Swisss designer Othmar Ammann decided that the look of the exposed girders and metalwork had their own unique beauty to recommended it. And so, masonry-clad bridges were “out” and have never made a real comeback. 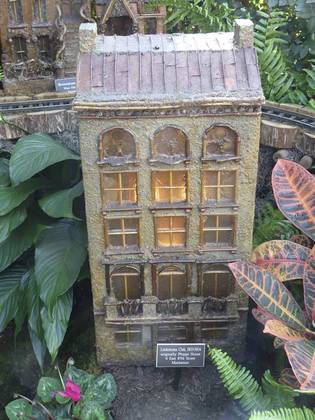 It’s surprising and gratifying to find edifices I had already snapped when roving with the camera in the NYBG collection as well, like the Liederkranz Club, 6 East 87th Street, Upper East Side. The Liederkranz Society, a “singing society” founded in 1847 by German immigrants to preserve the culture of the old country in the United States, is located in an Upper East Side Renaissance Revival mansion constructed in 1904 as the home of Henry and Annie Phipps; the Society purchased the building after World War II, after it had served a stint as a private school for children of Soviet Russian consulate employees. There are other buildings associated with such German cultural societies such as the Arion Mannerchor building on Arion Place in Bushwick, but the Liederkranz Club is still very much active in this building. Piano manufacturer and German immigrant William Steinway served as President in years between 1867 to 1896, and Theodore Roosevelt was an honorary member during his time as New York City Police Commissioner.

As for Henry Phipps, he was an industrialist and a partner of steel magnate Andrew Carnegie, and shared his friend’s interest in philanthropy. The foundation he founded built the Phipps Houses, a project built for working-class families in the 1930s in Sunnyside, Queens. 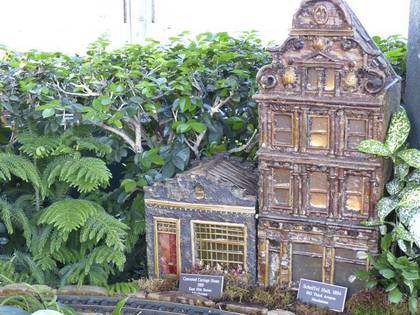 Busse and company juxtaposed buildings from different eras and different locations together to achieve aesthetic harmony. One example of this was putting together an East 19th Street carriage house and 3rd Avenue beer hall together here.

East 19th Street changes character, rather abruptly, for the block between Irving Place and 3rd Avenue and transforms itself into a tree-lined, suburban-style stretch dotted with small brick buildings, carriage houses, and cottages. The carriage house was once a stable.

Scheffel Hall, 190 3rd Avenue at East 17th, was constructed in a German Renaissance style with a distinctive scrolled gable in 1894. The ground floor was originally a beer hall patronized by the then-substantial German population in the neighborhood. It was named in honor of Joseph Victor von Scheffel (1826-1886), a German-born poet and novelist. 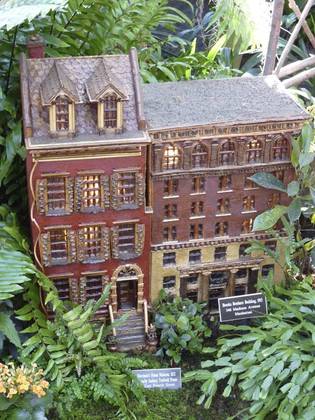 Believe it or not I’ve never been inside the Federal/Greek Revival Seabury Tredwell House (left) at #29 East 4th, built in 1832 for Joseph Brewster but later owned by merchant Seabury Tredwell, who left it to his spinster daughter Gertrude, who resided here until her death in 1933; she was the inspiration for Henry James’ “Washington Square” and its film adaptation, The Heiress. Inside furnishings have been kept pretty much as they were in Gertrude’s day as the Merchant’s House Museum, and some say Gert hasn’t left yet and the house is haunted. (I would love the chance to disprove this by staying there overnight.)

The Brooks Brothers flagship store is at 346 Madison Avenue and East 44th Street. The haberdasher, founded in 1818 by Henry Sands Brooks (1772-1833) and after his four sons, Elisha, Daniel, Edward, and John, inherited the business upon their father’s death, renamed it “Brooks Brothers” in 1850. The company’s first store was located at Catherine and Cherry Streets on the Lower East Side and occupied four other downtown locations before constructing this Federally-inspired building as the flagship location in 1915.

While Brooks Brothers has outfitted 39 presidents and is considered a somewhat conservative institution, 346 Madison has had its quirks. There was once a dude ranch managed from the 4th floor, and there was actually once a Brooks Brothers tobacco brand. Jackets were once displayed on tables inside out until, in 1966, Prince Philip complained that that arrangement looked sloppy, and onto hangers they went. 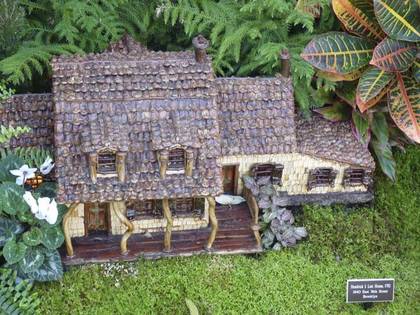 Johannes Lott built a small house on his Flatlands property about 1720 on land first settled by Dutchman Hugh Aerens as far back as 1636. In the 1700s, Gerritsen Creek still flowed nearby. Johannes bequeathed the house to his son, also named Johannes, who became a colonel in the Kings County militia and fought in the French and Indian War. His son, Hendrick I. Lott, inherited the small house and farm and built a much larger addition in 1800 for his bride Mary. The house remained in the Lott and Suydam families until 1989, when Ella Suydam, great-great-great-great-granddaughter of Johannes Lott, passed away. The farm was sold off when the city began to lay out streets in Flatlands and subdivide property in the mid-1920s. The house’s address is 1940 East 36th Street in the Marine Park area in Brooklyn between Avenues S and T.

Though records show the Lotts were among Flatlands’ largest slaveowning family, and evidence of African rituals has been found in the house, they also show that the Lotts freed their slaves two decades before slavery was outlawed in New York State in 1827. The Lott House may even have been a way station in the Underground Railroad in 1844. 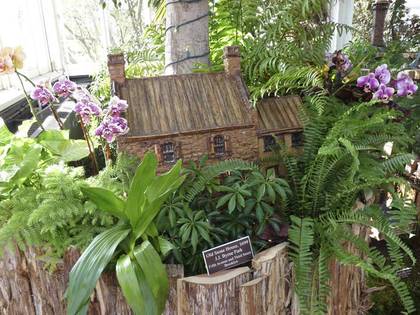 Another building from the NYBG collection from the colonial era is what we now call the Old Stone House was originally built in 1699 by Dutchman Klaes Arents Vecht. The house remained in the Vecht family until just prior to the American Revolution, when it was rented to an Isaac Cortelyou; his father, Jacques, bought the property in 1790. Officially known as the Vecht-Cortelyou House, the Old Stone House played a pivotal role in the American Revolution. On August 27, 1776, during the Battle of Brooklyn, things looked dire indeed for the Americans, as the British and Hessians were overwhelming them in what is now the northern section of Prospect Park.

Hoping to reach forts at Boerum Hill and Fort Greene, about 900 American troops retreated from what would be the Greenwood Cemetery area; they hoped to track northward. General William Alexander, also known as Lord Stirling, led a company of 400 Maryland troops that engaged British General Charles Cornwallis’ force of 2,000 grenadiers and cannoneers at the Stone House to cover the retreat and, while many of the Americans were able to escape, Stirling was captured and 259 of the Maryland troops were killed. George Washington, observing the battle from what is now Cobble Hill, is said to have uttered: “What brave fellows I must this day lose.”

In 1850 the house was sold to developer Edwin Litchfield (who dredged the Gowanus Canal and built Litchfield Manor in Prospect Park). Litchfield proceeded to let the house fall into ruin and it was finally demolished in 1897. At the direction of Brooklyn Borough President J.J. Byrne in 1930, the house was reconstructed from remaining bricks and the original foundation and was completed in 1933. The surrounding park was named for Byrne.

Hundreds of historic and architecturally significant buildings are presented in the New York Botanical Gardens train show. Buffs of architecture, model railroads, NYC infrastructure, and humid weather all find common ground here. It’s now closed for the season, but will be back in November.