Broadway Between the Squares

Walking the centuries of Broadway (formerly Brede-weg), laid out for the first time in the 1620s. 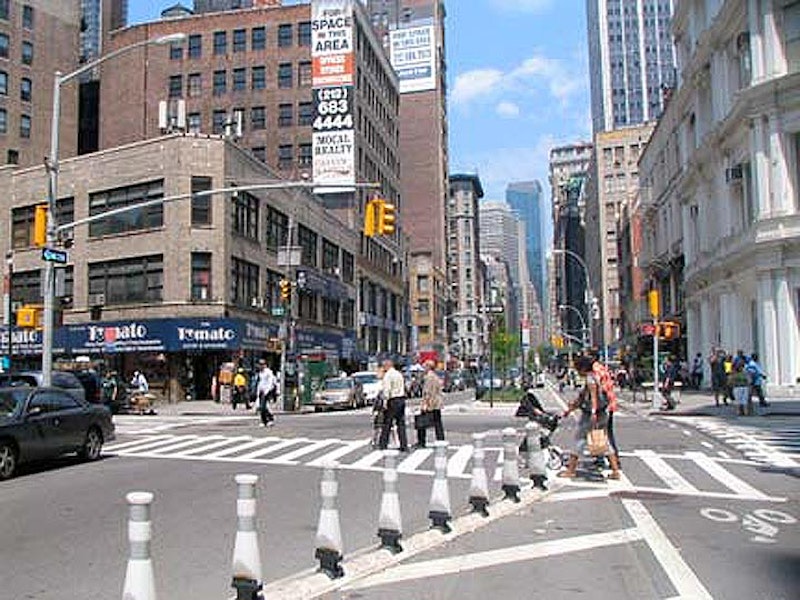 Broadway runs north from Bowling Green and, under a variety of names, runs north in New York State almost all the way to the Canadian border. Other than a few other aboriginal roads such as the Bowery and St. Nicholas Ave., it’s one of the few roads that predated the Colonial era that’s still in use on Manhattan Island; it was used by the Lenape Indians before the Dutch arrived, and was probably in use by the buffalo before the Native Americans arrived. It’s “broad” in a physical sense only when you get north of Columbus Circle—it’s of average width south of that, and called Broadway (Brede-weg) only because it was wide in comparison to the narrow cart paths of New Amsterdam that were laid out when the area was first colonized in the 1620s.

I recently took the camera down Broadway from Greeley Square, where Broadway, 6th Ave. and W. 32nd St. come together, to Madison Square, named for the places where Broadway and the Eastern Post Road to Boston came together in the colonial era.

I was familiar with this stretch of the World’s Greatest Street since I’ve worked in the area on two occasions: from mid-1988 to late-1991, I was a proofreader and a typesetter at a shop called ANY Phototype, named after the initials of the three Russian immigrants who founded it, and from 2000-2004 I was a copywriter in the home goods department for Macy’s, composing incredibly repetitive flyers and newspaper blurbs for mattresses, kitchen implements, bath towels and textiles. I received a thorough knowledge of the location of Macy’s wood escalators, and occasionally escaped onto the roof ledge for some photo ops, before being dragged back in and lectured and threatened by the management.

ANY Phototype, meanwhile, was a very strange existence—in a company of about 15 employees, I was one of four native English speakers. I was at this type shop just before the era of computer typesetting—we worked at green screen terminals and had to type in complicated lines of code to get accent marks to print. And there were a lot of accent marks, because ANY Phototype took work in “any” language that used Roman characters, as well as Russian-language publications that used Cyrillic letters. I didn’t work on the latter, but did with every other language. Since I speak only English, I had to work character by character. There was none of the instinctive feel that you have when working in your own language—studies say the human eye and brain only require the first and last letters of a word to apply proper context and make sense of written communication. I worked with languages I’ve never seen before or since, such as Haitian Creole and Romansch, a language spoken by 35,000 people in Switzerland.

The Broadway I found there, the wholesaling capital of Manhattan with sidewalks clogged with hawkers and knockoffs of leather goods, costume jewelry, and cheap clothes, was grimy and sweaty in the summer, and that’s really the only way to experience it. Visit during the dog days between Memorial Day and Labor Day, let the perspiration trickle down your neck and enjoy the ambience of a true NYC experience. 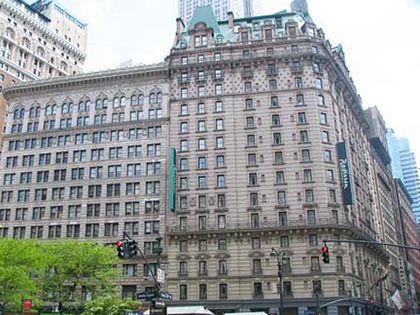 At W. 32nd, Henry Hardenburgh’s Hotel Martinique rose in 1900 and expanded greatly in 1910. Its own restaurant was modeled after the Apollo Room of the Louvre featuring Walnut panels and wainscoting and panels depicting Louis XIV and his courtiers. The hotel wasn’t named for the Caribbean island but for its original owner, William R. H. Martin. (R.H. were popular initials around here—Rowland Hussey Macy’s giant emporium moved to Herald square in 1902.) After a stint as a homeless shelter, the Martinique was revived as part of the Radisson chain.

Across the street we find the old Gimbels Department Store, built from 1908-1912 by architect Daniel Burnham. It was reborn as the glassed-in, hollowed-out Manhattan Mall in 1989. When I worked in the area from 1988-1991 I’d often get lunch on the 7th floor Food Court, which had large windows facing Greeley Square and the Hotels McAlpin and Martinique. In the late-1990s, though, the building’s owners decided that executives deserved these views more than the public; lunching shoppers were banished to the basement, while the seventh floor was converted to offices. 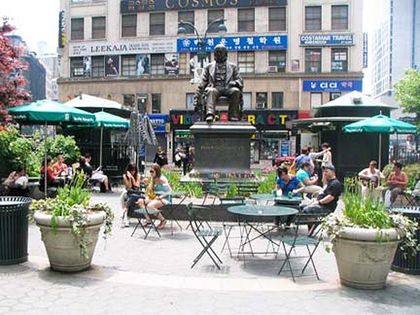 Just as Broadway’s intersection with 7th Ave. makes a “bow tie” on the map as Times Square, it also makes a “bow tie: effect with 6th, with Herald Square the top half at W. 35th and Greeley Square the bottom, at W. 32nd. Both are actually triangles, not squares. Honored here is Horace Greeley, founder of The New York Tribune.

Alexander Doyle’s 1894 statue of Horace Greeley here was commissioned by the Typographical Society of America: Greeley was first president of Typographical Union No. 6. There’s another statue of Greeley downtown, on the east end of City Hall Park facing the Municipal Building. That one, by John Quincy Adams Ward, was produced in 1890. 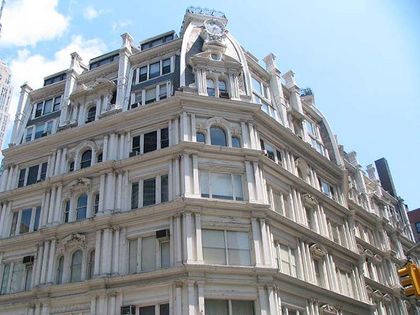 Every day when reporting to work at 130 W. 29th St. (a grimy place, built between the wars and still there) I could look down the street and see the magnificent, mountainous Gilsey Hotel at 1200 Broadway. It goes back to 1869 and was designed by Stephen Decatur Hatch and Daniel D. Badger. When I was working in the area in the late-1980s it was painted deep brown, but later restored to the cream color it was reputed to have had when it first went up. It was the first hotel to offer telephone service to guests and had a bar made of silver dollars. Oscar Wilde and Diamond Jim Brady, the great gourmand, were frequent guests.

By 1911 the Gilsey closed and garment trade lofts occupied the many rooms. I’d sometimes have lunch at a long-gone German restaurant that occupied one of the storefronts on the W. 29th St. side. Known as The Olde Garden, it was a piece of old New York City ambience. 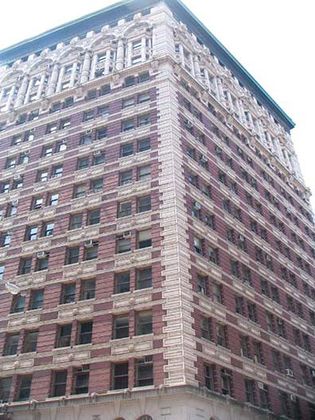 The multi-color brick St. James Building on the SW corner of W. 26th Street and 1133 Broadway dates to 1897 and is marked by its three-story arcade along the roofline. The large circular window above the front door is called an oculus, after the Latin for “eye.” Daniel Burnham, who built the Fuller (Flatiron) Building three blocks south, assisted in the design. It replaced the earlier St. James Hotel, which Confederate terrorists attempted to burn down in 1864. 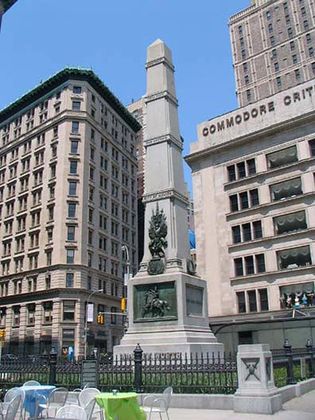 The complicated intersection of Broadway, 5th Ave. and W. 23d-25th Streets allows for some much-needed wide open spaces—Broadway can be claustrophobe-inducing in its diagonal stretch between Greeley and Union Squares. Tall towers now take advantage of this open space.

The General William Jenkins Worth Monument was the first such tower, built to honor the War of 1812, Indian Wars and Mexican War fighter. After his 1849 death the general was buried in Brooklyn, and re-buried here after this obelisk was constructed in 1857. Therefore, this is tied as the smallest cemetery in NYC with the Amiable Child Monument near Grant’s Tomb. Fort Worth, Texas also honors him.

For many years the 1902 Fuller (Flatiron) Building and the 1909 Metropolitan Life Building dominated the Madison Square skies, but they were joined by two tall residential towers in the early-1980s and again in the mid-2000s. The square’s centerpiece is the Flatiron. Its “cowcatcher” glass-cased nose was put in place a couple of decades later. Early on, the story goes, cops would hustle along layabouts hoping to catch a view of ladies’ ankles when a gust of wind lifted their skirts by telling them: “23! Skiddoo!”