So You Don't Think the Bible Is Funny?

God Is Disappointed in You throws out the sacred garbage. 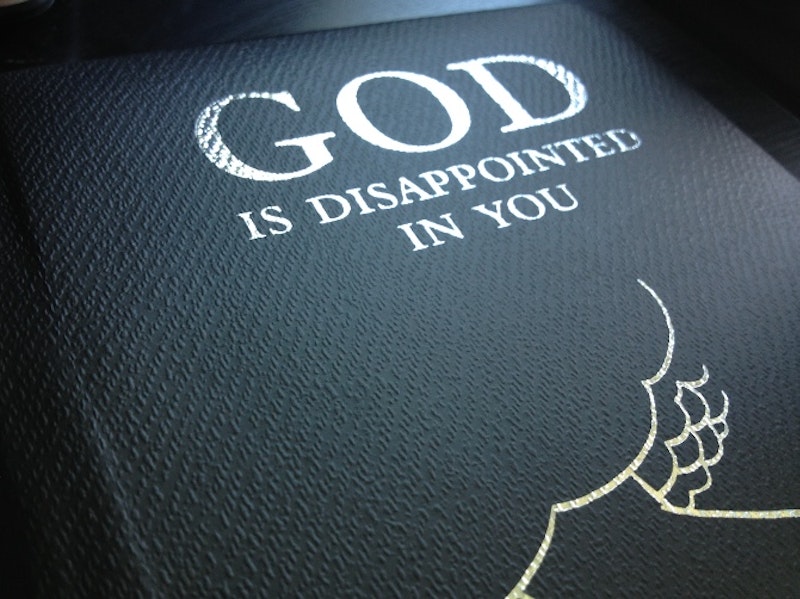 We’re looking down the barrel of a new election season in America. There aren’t that many big ones, but local elections can be just as important as their national counterparts (if not more, considering Congress is currently less efficient than the nearest DMV). And though there are plenty of pundits who’ll tell you that the religious right is deader than those two guys they crucified next to Jesus, people like me who have seen small-town politics know that some places are loathe to really separate church and state.

Mark Russell and New Yorker cartoonist Shannon Wheeler (who also created the incredible adventures of Too Much Coffee Man) have the perfect way to cut through any fundamental Christian tomfoolery, whether it originates from a politician or your intolerant uncle come Thanksgiving. The duo collaborated on God Is Disappointed in You, a retelling of the Bible in its entirety from Genesis to Revelations in modern vernacular. There’s about a 1000 percent increase in words like “dong” and “nutclutcher” in this version, but the central tenets remain the same, and all the stories retain their bizarre Biblical hilarity.

Don’t think the Bible is funny? Russell will prove you wrong. The Book of Ruth alone is a pretty amusing story of sex and marriage-bargaining, and it’s among the driest fare you’ll find. If you know anything about these stories going in, you’ll probably get more of a kick out Russell’s retellings, but they’re funny regardless of your background. And as long as you’re over 40 or have an equivalent sense of humor, you’ll enjoy Wheeler’s one-panel New Yorker cartoons that help lampoon the more iconic quasi-historical moments.

For me, though, the real value of God Is Disappointed doesn’t come from its humor. Russell says he began the project to get a better perspective on the one book that has shaped human history more than any other, and he’s successfully imparted that distance for readers. It’s important to realize that the Bible has a lot of excellent lessons that are packed into a series of absolutely ridiculous folk tales that are, in and of themselves, not great to build a worldview around. Leviticus is a great example; sure, it’s a well-known punching bag that most Christians disavow, but seeing God’s condemnation of “cotton-and-wool twills, threesomes, [and] crooked scales” alongside gay sex makes the whole “abomination in His eyes” deal a lot easier to stomach.

Russell notes in his afterword that part of his goal was “to throw out the sacred baggage” that prevents us from giving an honest critique of the Bible. Astonishingly, nuns have adopted the book as a teaching aid and one pastor has distributed it amongst his congregation. But not every member of the faithful has such respect for the truth or critical thinking, so when they start spouting “thou shalt nots” at you it’s best to come prepared.