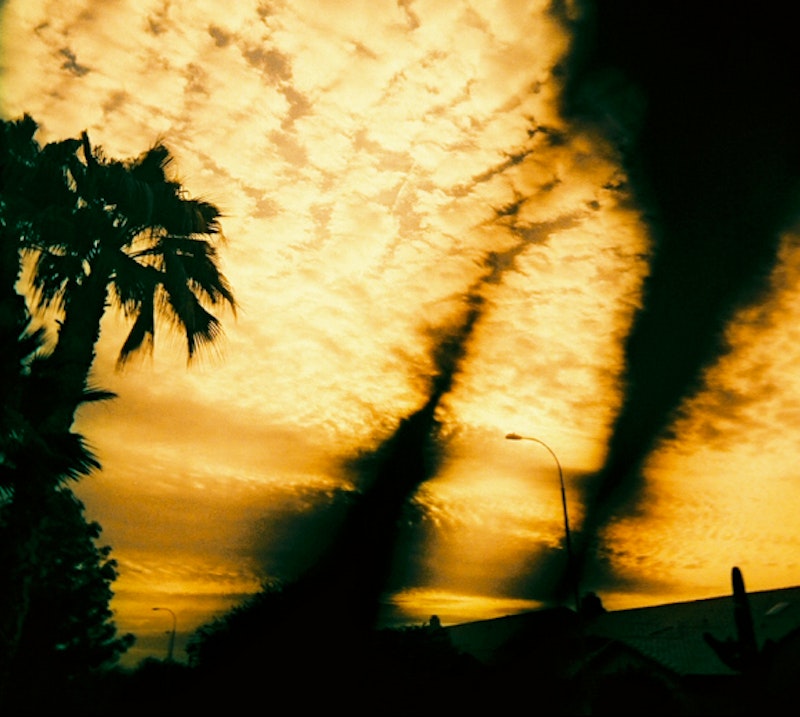 Daydreams: those indestructible psychic forces that thrive in the slipstream of consciousness. Submitted here for your approval are descriptions of images and emotions originally conceived in daydreams. These true confessions were related to us by various sources who wish to remain anonymous.

The Intercontinental Frog: "The body careens across the sky in a majestic arc of death-defying grace. It touches down slowly, gently, decreasing in speed as it approaches the ground. With a blurry hop it's back up into the air, over dense outcroppings of trees, eyes blinded by the solarized sheen of metallic opulence, the righteous steeples that reach out to touch the hand of a benevolent creator, creeks, tributaries, sparkling arteries stretching out into the mighty cerulean—an abyss that cradles the world's fate with nervous, infinite ripples. Locks of hair splayed wildly at the roots, sport coat flapping like a flag, wind whipped slacks gravity-hiked just above the ankles."

A Letter Lost And Found: Covered in dust and grit, somewhat pulverized, ink smudged address and all, surprising contents are pulled slowly from a worn envelope:

"Dear Conch Holder: Thanks again for throwing that bucket of invisible slime at Billy. That's one person who should really watch out before constructing jet liners out of cheese! Also, the next time you're in town please remember to bring the remains of your pet kangaroo so we can finally figure out if Larva Bim's boss is actually one of those fungi you hear so much about at church. Anyway, I'm getting way off the subject: California called and said that the office out there is really low on sleep-inducing grinder melds; if you can get someone from accounting to crunch the numbers and figure out how we can decrease productivity ASAP in honor of all non-existent feelings, then I'm sure the Democratic Republic Of Koober & Stinky Jane will finally get off my case and get back to drinking all that molten copper before Rotie's Entro-rama (aka yonklucratic virginity) becomes a gall durned vision quest. You're welcome, Startling Donna, The Ewe-topian Princess Of Tortellini Tool Shed (LLC)"

Awesome Jairi: "Streamers, banners, pomp and circumstance, fanfare, and festivity arrive in the trumpet blast of the Awesome Jairi Day parade. A stark naked marching band (whose individual members range wildly in age, size, and ethnicity) stomp and jiggle and honk along to the beat with joyous fury, kickin’ up a parking lot storm of dust and chameleon-like patriotism. Garishly painted floats made out of papier-mâché and tin foil symbolically depict Awesome Jairi's legendary code of conduct: a 20-foot tall toilet with mechanical robot arms nimbly swirling a pair of spongy nunchucks; a teal monster tank with hundreds of wooden beer barrels cranking its treads forward (these occasionally explode spraying God's nectar all over Awesome Jairi's ubiquitous, love-radiating dervish mob); gypsy worshippers of The Infinite Wheelbarrow haphazardly lob their crystal balls into an undulating nebula; and of course, there's the guest of honor—Awesome Jairi itself—all jolly and puffed out, white curly hair sprouting in the noonday sun, tie-dyed robes, septum pierced with a melting marshmallow fruit choco-pop, and big ol' bare feet, each toe clenched in ghostly amplified rings that caterwaul with hilarity at the defenestrated TV crew and their number one sponsor: Imperialist Rave Cow's Blind Fold 4 Dogs(!)."