I Hate My Breast Tumor

And the radiologist is a prick, too. 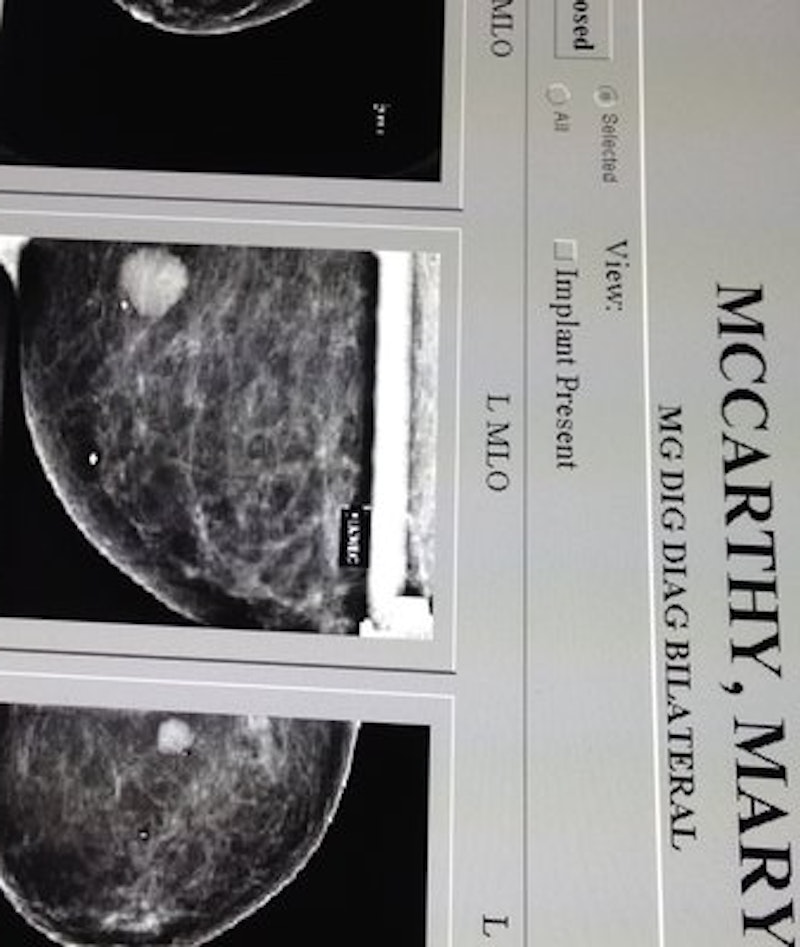 I wrote last year about finding a lump in my breast. After a biopsy, I was fortunate to discover it was benign. The doctors had told me it would be removed at the time it was biopsied, so I thought it was gone.  On my last mammogram, another lump was spotted, and the radiologist said it was too small to remove, and that I have a condition called fibrocystic breast disease. This sounds worse than it is; all it means is that I have lumpy boobs—half of all women have this.

What’s annoying about it, though, is that if you find a lump in your breast, especially after a few, you start to think they’re no big deal.  About six months ago, I started feeling a lump, again in my left breast. I ignored it. This is not what you’re supposed to do, but I assumed it was the same lump they’d seen on my last mammogram that was too small to remove. So I waited for my annual check-up, mentioned the lump to the doctor. She was not thrilled I’d waited six months. She explained that even though it’s a pain, I needed to treat each lump as though it might be cancer and get it checked immediately.

Mammograms with “additional views” suck because they are extremely painful—our boobs aren’t designed to be flattened to that degree. Waiting to get mammogram results and then scheduling an ultrasound is also not fun. Since the mass was palpable (able to be felt), I could get a two-for-one special at the radiology clinic: the mammogram and immediate ultrasound and reading by the radiologist, that went something like this:

“Is this the same one in your left breast from before?”

“Yeah, this is the original one we biopsied.”

“What? I thought you removed that one.”

“No, we just took a piece of it. That’s the same one from the last mammogram and the one you’re feeling now.”

“I was told it had been removed. It’s grown to the point where I can feel it, and I hate feeling it. Are you going to take it out?”

“We are going to watch it to see if it gets any bigger, but it’s benign. Let us know if you find any new ones or anything changes.”

I sat there, in my gown, my tits covered in ultrasound goo. The technician said I could get dressed, and then left. In my head was this:

“I did let you know something changed. Why should I keep letting you know if you aren’t go to do anything? Why are you leaving this thing in? I want it out. I also want a free boob job, so I will need some kind of frequent-flyer punch card that says if I deal with a prick radiologist with a lousy bedside manner 10 times, I get a free breast lift and reduction. I don’t like walking around with a tumor in my breast. I’m thrilled that it’s benign, because I’ve seen friends go through and relatives die from breast cancer, and so I know I am lucky. But in the same way I felt during my gynecological clusterfuckery experience with my hysterectomy, I kind of hate it when male doctors are stupid, insensitive douchebags. Shouldn’t people who receive medical training in reproductive/girly parts learn to have a shred of humanity, or at least be able to fake a halfway decent bedside manner? You know, instead of making us feel like “Leave the insurance money on the table, bitch,” and walking out?"