The Start of Something Not Too Good 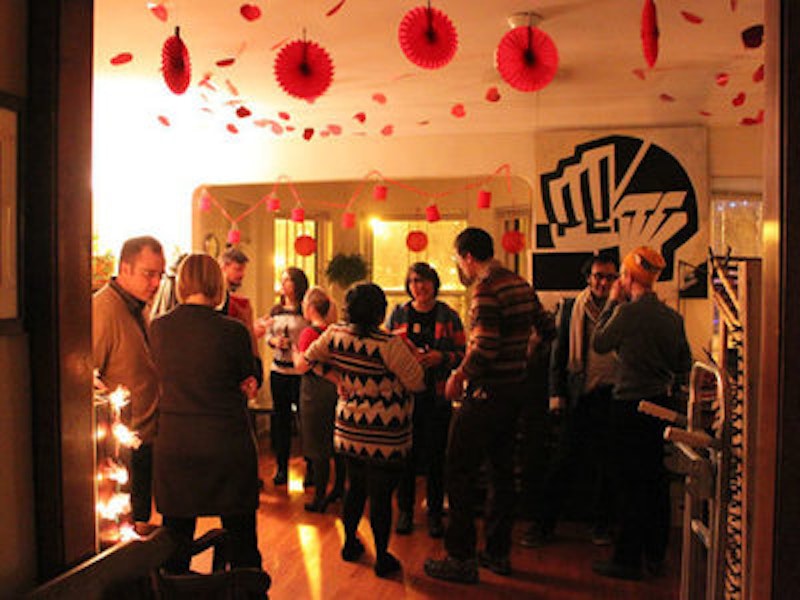 Looked at one way, Len’s life came apart. This took seven months and caught him by surprise, and the trouble started when he and Janey moved in together.

The housewarming was mainly Janey’s classmates, plus a couple of network guys who were younger and might appreciate the chance at some girls. Janey had a lot of friends and Len had none, really, and that might’ve been a sign. But nobody caught on to it. He seemed like the sort of person who had friends, and Janey’s friends made a fuss over him. Len wasn’t even 30, but he produced a series on TV. That bowled people over, him doing that when they were getting their degrees at law school. The show was almost off the air and Len’s boss had been pushed out, hence Len’s elevation. But still.

At the party Len met Oliver, a sandy-bearded fellow who wore a neatly ironed polo shirt and had his arms folded. Oliver lifted two sandy eyebrows at Len; he acted as if Len were his buddy from dormitory days and they were sharing a joke. On the set, in a corner of the living room, Len’s show played. That’s because it was past 10 on a Saturday; Len’s show had a graveyard slot. From the corner of his eye, Len could see the tilt of the space station as it loomed on the screen, or would have loomed if the set hadn’t been a portable. Elbows and heads kept most of the picture out of view, which was fine with Len. He hated science fiction.

Oliver flexed his eyebrows. “There’s an example,” he said. He twitched his beer in the direction of the man who had pulled out the TV. “I bet you can’t stand him.”

“An example of what?” Len said. “You weren’t saying anything that called for an example.” They’d been talking about commutes.

“Yeah. That was an excuse. I just wanted to say that about the person. Your not liking him.”

“We’ve never met,” Len said. “He’s part of the intake here.” The place was jammed; Janey didn’t just have friends, she had tons of them.

“Unwinding the cord,” Oliver said. Janey’s friend had indeed been droll and puckish about this act; as everybody watched, he had undone loop after loop with the air of a waiter setting an elaborate table, then brandished the plug as if capping his performance.

From the corner of his eye, Len sensed the mottled white flare of the episode’s exploding space ship. On a color set, the explosion would’ve been yellow, blue and violet. With a droop to his spirit, Len remembered the line of dialogue that was about to follow. “If those boys aren’t gone to tarnation, that’s one whale of a start,” the Commander said from inside the set. Len could barely hear over the noise of the party, but dialogue became engraved on the nervous system after enough editing sessions.

“I mean, that set was pushed well into the corner,” Oliver said. “He had to get it out. You’re the one who pushed the set in the corner, right?”

“And it’s not like he’s your friend and he has to see the show. He just wants to be the life of the party. He figures that’s the way to do it. Saying ‘Gather round, folks’ while he plays maître d’ with the cord.”

From the set: “Commander, the anti-deltan transponders can’t handle this load.” Len felt the skin between his shoulders shrink. He hated science fiction.

Len looked at him. He had really come to dislike this fellow. Maybe more than the fellow who’d been unwinding the cord. “Producing a network TV show that you don’t even like,” Oliver said. “And you’re not even 30. That’s some combination of attributes. That’s unusual. If somebody’s a kid who excels and he’s doing a big man’s job, he’s going to like the product or he’s going to be indifferent. But you.”

“You know,” Len said. “You’re really getting on my nerves. I don’t need you fishing around for a reaction.”

“Look,” Oliver said, and he fished a hand in his pocket. Whatever he tried to pull out wouldn’t come, so he shrugged. Tilting his head, he emptied his beer and put the can on the floor. From his pocket he pulled out a card. “Here,” he said. “Hold on to it or not.”

The card was for Belvedere-Pacific Productions and said Oliver was Oliver Champell, vice president for project development. It was embossed and the paper was good.

“I’ve heard of Belvedere-Pacific,” Len said. “I mean, I know the name.”

“Doing very nicely. A lot of productions getting picked up. Sky Frontier is done, am I correct?”

“For my part, I’m very happy we met,” Oliver said. “The number’s on the card. Yes, game shows. We can talk about participation.”

“I don’t want to participate in a game show,” Len said.

“Percentage,” Oliver said. “You getting a percentage. That’s what I mean.”

Len didn’t often feel stupid, but he did just then.

“That’s okay,” Oliver said. “All right, good night to you. If Sky Frontier’s done, give me a call.”

“I’m really not promising that,” said Len, who held the card flexed in his hand.

“Usually somebody who hates their product and is high up,” Oliver said, “usually that kind of person is going to be old. Possibly none too competent. But you’re neither. You’re young and competent, and I think you could make us some money.”

From the set, through the noise of the crowd: “If Voldurran etiquette could be explained so easily, my people might still reside on Antharok V.” The skin between Len’s shoulders died and shriveled.

“Night,” Oliver said. “Really, I liked meeting you.” He wound into the crowd.

The next afternoon, Janey was napping with her feet on Len’s lap. They’d cleared up the beer bottles and paper plates, and the kitchen trash barrel was stuffed. Janey woke up and blinked at the afternoon sun.

“How do you know somebody who does game shows?” Len asked.

Len described Oliver and gave his name. “No,” Janey said. “Unless Billy knows him. He did the summer at Weiskind Schiff, they do a lot of entertainment law.” She swung her legs off his lap and sat up. “Or one of your guys,” she said. “The network guys. Friend of a friend.”

Len thought that was possible. He didn’t keep track of who his network acquaintances hung out with. “Game shows,” Janey said. “I guess I’m a snob. I don’t know how I could know somebody who did game shows.”

“Okay, I’m a snob,” Janey said. “I don’t think I’ll ever know somebody who does game shows.” Len didn’t tell her about the card, and seven months later he didn’t know her anymore. Maybe if he’d had friends, things might have turned out differently. But he didn’t.