Selling My Life's Work at a Yard Sale

Selling out isn’t as easy as you’d think. 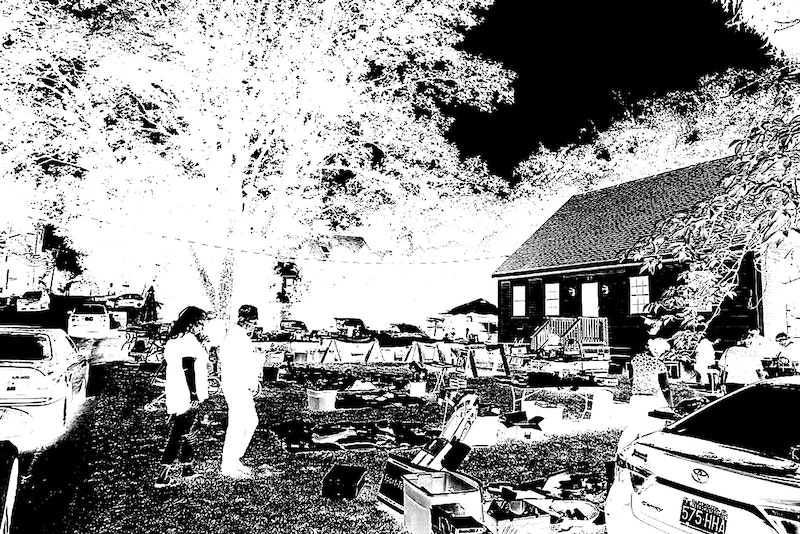 Over the years, many of my artist friends have expressed the same fear: when they die all their art, paintings, poems and novels will wind up in a dumpster. I’ve heard horror stories about traces of peoples’ life work found in back alleys. I decided to sell out. Put a sale on, everything’s got to go, two-for-one, early-bird specials, the works. It was a disappointing experience. Selling out isn’t as easy as you’d think.

I took out an ad in the local paper saying I’d be willing to prostitute all aspects of my artistic activity for commercial purpose. I want to get onboard, no more fighting the Capitalist Behemoth. I want to participate fully in The Society of the Spectacle. They can use my paintings to sell mouthwash, jeans, or two-prong-vibrators. They can put them on billboards, use them as backgrounds, anything they want, I’ll sign on the bottom line.

I’ll allow any line of poetry I’ve ever written for use as an advertising slogan, no questions asked. I just opened up my new book of Selected Poems (published by Apathy Press) and found the line “We are destined to be ourselves, our pockets bulging full of yesterdays.” I think that line could be great in a TV commercial. Imagine the following scenario: A couple of the beautiful people in a dream apartment are looking for a good toilet bowl cleanser. They look concerned, they have guests coming over and there’s an unsightly smear in the bowl that won’t go away. We see a prolonged close-up of the smear which fades into their pained yet beautiful faces. They’ve tried everything and it stays there, stubborn like a guilty memory. What will the guests think? They go out onto the balcony and look down the 30 stories to the pavement below thinking, should they jump? But then there’s a knock at the door and we see Mr. Clean show up with his bald head and reassuring smile, and while holding out his New and Improved Cosmic Strength Toilet Bowl Cleaner, says, “It’s okay folks.  We’re destined to be ourselves, our pockets bulging full of yesterdays.” The couple looks relieved and confident. They now know that the bowl will be clean. That would do it for me. I’d run to the store and buy several jugs of the stuff.

Anything I’ve ever done musically is up for sale. Use it in cheap films, TV series, radio ads, cut it up and make jingles out of it, play it in elevators. It could be fun to walk through the local supermarket and hear my song “I Lost Myself” playing,  while standing next to the genetically-altered frozen peas and carrots, or lab-grown beef.

I placed my ad and waited for the phone to ring. It never did. This led to soul-searching. What did I do wrong? I mentally reconstructed the chain of events. I realized that Selling Out never works. One has to Buy-In. And this is the curse that can’t be broken. Because everyone would be happy to Sell Out and the people buying know it. Selling Out isn’t good enough. You must bring the required sacrifice to the alter, not one of your own choosing. The sacrifice is yourself. You have to Believe, you have to eliminate the distance between yourself and your mental opposition to what I call the Grinding-Process-of-Societal-Self-Annihilation. This is what’s hard, impossible for some. And those buying know it, know when you’re faking it. Sorry Charlie, they don’t want tunas with good taste, they want tunas that taste good. And what tastes good to them is your unadulterated soul. Because when they get it, it’s the real victory.