Queen of the North

Walking the length of 5th Ave. that the tour buses and walking tours don't reach. 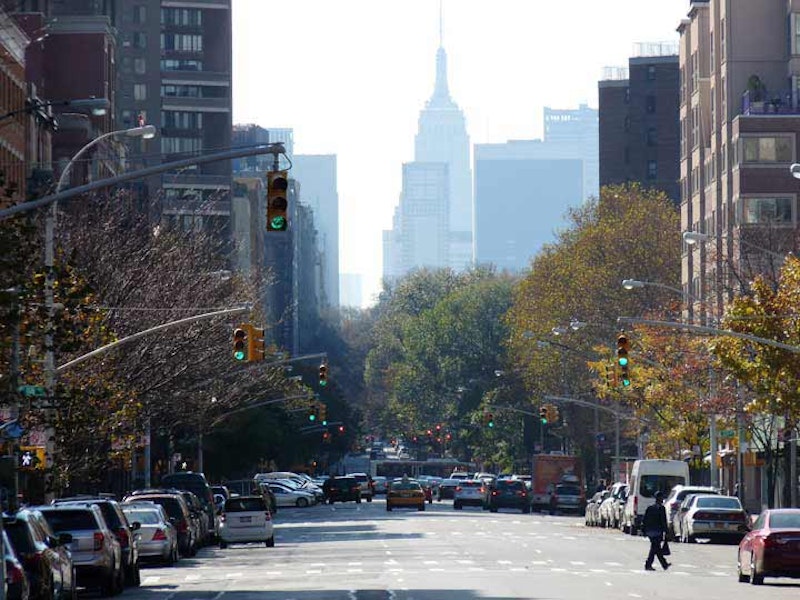 I recently strolled the length of 5th Ave. north of Central Park up to the Harlem River Dr., a part of the avenue the tour buses and walking tours don’t visit often or at all. 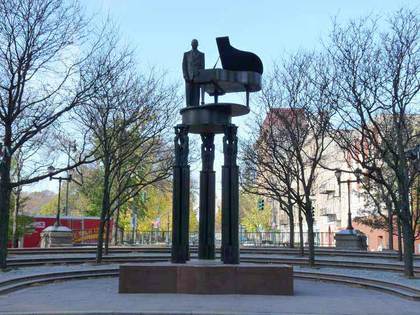 The intersection of 5th Ave. and E. 110th St., Central Park North, has accumulated three names over the years: one for a pop/jazz immortal, another for the most famous salsa performer/composer in history, and another for a construction boss/state senator/union leader. The traffic circle here was named for Duke Ellington (1899-1974) in 1995; he lived in the Upper West Side in several locations, so it’s slightly unusual that his memorial is here at an intersection on what’s technically the East Side. That’s somewhat rectified by W. 106th St.’s status as Duke Ellington Blvd.

Robert Graham’s striking 30-foot tall bronze Ellington Memorial was dedicated July 1st, 1997 and shows the Duke standing beside his piano facing east, on a pedestal supported by three columns each surmounted by three female figures meant to support Muses. The work was a gift to NYC from the Duke Ellington Memorial Fund and its president in 1997, singer/pianist Bobby Short (1924-2005).

On August 20, 2000, about two months after his death, E. 110th Street between 5th and Madison was co-named Tito Puente Way for the man who was synonymous with salsa. Ernesto Antonio “Tito” Puente lived on the block as a child and youth from 1923 to 1938, and lived in Spanish Harlem for much of his life. The intersection of 5th Ave. and 110th St. has been a roundabout, or “traffic circle,” since the late-1800s, but it was unnamed until 1926, when the Board of Aldermen (today’s City Council) named it for James J. Frawley (1867-1926), state senator, Tammany Hall district leader, and construction manager whose company built the Manhattan and Queensborough Bridges, according to Sanna Feirstein in Naming New York. At this juncture a couple of Frawley street signs remain (including a new Clearview sign), but neither supply the full name.

Seeing Frawley Circle on a street map as a kid, I incorrectly assumed that tribute was being paid to the blustering actor Bill Frawley, who played Fred Mertz on I Love Lucy and Bub on My Three Sons. 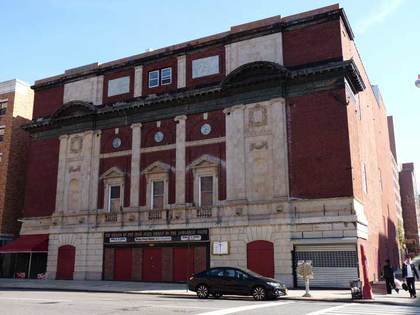 Walking north on 5th Ave. from Ellington Circle isn’t promising at first, as the bland Martin Luther King and Senator Robert Taft Houses appear on the left and right, but at the NE corner of 5th and E. 116th appears the faded glory of the Mount Morris Theatre, now called the Church of the Lord Jesus Christ of the Apostolic Faith, headed by the singularly named Bishop Omega Shelton. The theater opened in 1913.

It likely opened as a vaudeville playhouse, although it was showing films as early as 1917, as evidenced by a Times notice from January of that year, advertising the outrageous silent star Alla Nazimova in War Brides. Later in 1917, a member of the Institutional Synagogue, which held services in the building, used the stage as a platform from which to denounce the Russian Bolshevik movement. In 1934, the Mount Morris was shut down by the city’s zealous License Commissioner, Paul Moss—reportedly because it owed its film projectionists $1500.

By 1934 the Mount Morris was known as the Campoamor and later as the Cervantes, Hispano, and Radio Teatro Hispano as the area became more and more identified as Spanish Harlem. Notable performers included tango singer/songwriter Carlos Gardel and flautist Alberto Socarrás. 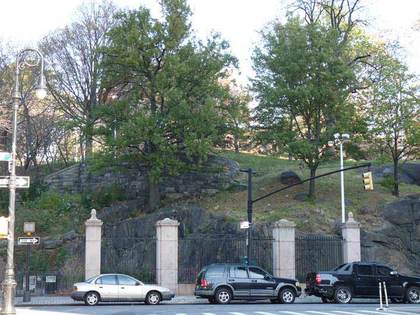 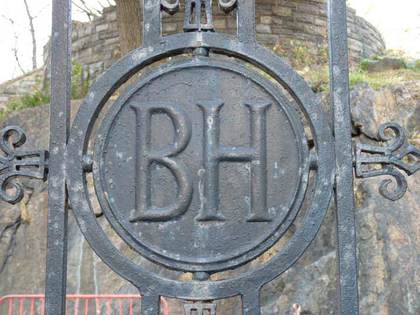 5th Ave. is interrupted for four blocks by a tall rock outcropping that was never leveled by developers and engineers, as were most of other of Manhattan’s high hills. It is a tall hill. One of the park’s main gates is located on Mount Morris Park South (120th St.), marked by the initials BH. Neither Marcus Garvey or Mount Morris has “BH” as initials.

The reason there is a BH on the gates is simple. The gates originally surrounded a portion of Bellevue Hospital downtown on 1st Ave. in Kips Bay, and were removed during a renovation in the 1950s; they were subsequently installed here, BH and all.

Native Jamaican Marcus Garvey (1887-1940) was a charismatic community leader in the early-20th century who was an early promoter of African-American self-sufficiency; his goal was to found an independent country for African-Americans in west Africa. He was found guilty of mail fraud, was deported to Jamaica in 1927 and died in exile. He remains a revered figure, however, for his founding of the UNIA in 1914 and as a promoter of social, economic and political freedom.

Land for Mount Morris Park was dedicated by the city as early as 1839 when the hill was thought too high to level, as many other shorter hills had been as the city’s northern limit marched up Manhattan and the street grid was established. The promontory was known by the Dutch in the colonial days as “Snake Hill” for its native reptile population. The last remnants of “Snake Hill” east of the park, a huge rock outcropping on Park Ave. between East 122-123rd Sts., were demolished in 1911. 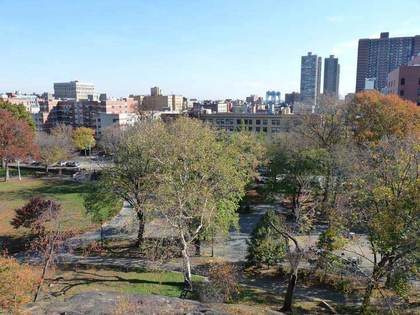 The name Morris turns up frequently in northern Manhattan and the Bronx. Though the Bronx locales are named for the prominent Morris political dynasty, the origin of the name Mount Morris Park is a puzzler for historians. A Robert H. Morris was NYC mayor from 1841-1844, but the park had been established by then. Sanna Feirstein of Naming New York guesses that the park’s high elevation gave a good view of the Morris holdings across the Harlem River to the northeast. 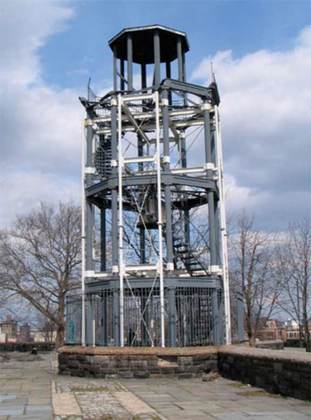 Before electric lights, radio or fire alarms, when a fire broke out, you had to make a lot of noise on your own to alert the local population. Blazes were fought by volunteer fire departments, which were poorly-coordinated and organized, until 1865, when the New York state legislature replaced the volunteer companies with the Metropolitan Fire Department. (The Fire Department of New York would succeed it in 1870.) Until the fire companies acquired a telegraphic alert network in 1874, they relied on watchmen in lookout towers that were built on hills in Manhattan. The Mt. Morris fire tower is the last of its kind in NYC and the USA.

Many of these towers were made of wood, and didn’t stand up to the elements over the years. This one, built by Julius Kroehl in 1856, is made of cast iron while the design is based on earlier towers by James Bogardus, who’s built earlier such towers on 33rd St. near 9th Ave. and Spring St. near MacDougal that disappeared decades ago.

How did the fire towers work? When a blaze was spotted, the watchman would ring the bell, with different pealings indicating different neighborhoods. He’d also use signal flags during the day to alert a nearby fire company. The invention of the telegraph by Samuel Morse was the first step in modern fire alerting. The tower’s five-ton bell was cast by founders E.A. and G.R. Meneeley of West Troy, N.Y in 1865, replacing the original 1855 bell. According to EastHarlem.com, the Mt. Morris bell continued to sound even after more modern fire alarms were installed: at noon and at nine p.m. weekdays and nine a.m. and nine p.m. on Sundays for timekeeping and church purposes until about 1909. After a few years’ absence for repairs, the fire tower was recently restored in its old place in the park. 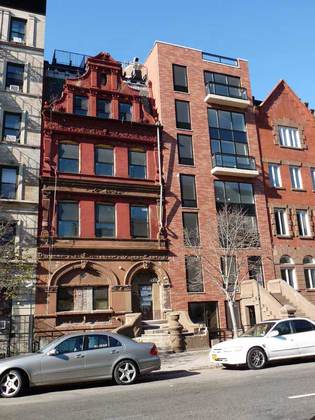 On the west side of 5th Ave. between W. 127th and 128th, there’s a stand of classic residential buildings, interrupted by a noncontextually renovated building that kept its brownstone stoop. But the building on the left in this picture, #2064 5th Ave., is rundown but has retained most of its classic elements. According to a Trulia real estate listing it was designed as a mansion with 19 rooms that included 15 bedrooms, six bathrooms and a full cellar, and original detail like inlay flooring and fireplaces are still intact. Today’s architectural term is voussoir. A voussoir is one of many wedge-shaped stones used to build an arch. They’re hard to see here, but a closer look will reveal them. 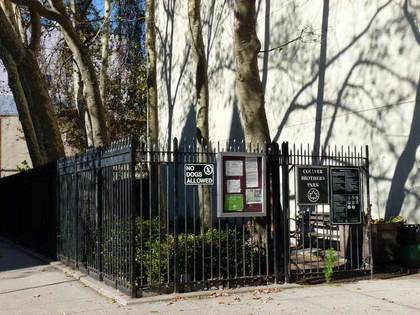 The Collyer Brothers Park at the NW corner of 5th and W. 128th is named for history’s most infamous hoarders. It’s all that remains of the former abode of Homer and Langley Collyer, a brownstone rowhouse on the corner that the two brothers had occupied for 38 years between 1909-1947. They’d moved to the house with their parents, gynecologist Herman Collyer and his wife Susie; the doctor abandoned his family in 1919, passed away in 1923, and the two sons inherited their parents’ possessions and moved them into the 5th Ave. brownstone. Both brothers were Columbia University graduates, Homer earning a degree in admiralty law and Langley a degree in engineering.

After a series of burglary attempts, the brothers became increasingly reclusive, boarding up the windows, never throwing out any accumulated possessions and setting elaborate booby traps to foil any intruder. Eventually they’d collected numerous pianos, thousands of newspapers, and a model T Ford (living without gas or electricity, Langley had rigged up a generator from the car engine). Homer suffered a stroke and lost his sight, forcing Langley to scour the neighborhood for scraps of food, with water being obtained from Mt. Morris Park fountains. The brownstone became suffused in squalor with dozens of stray cats, rodents and other vermin. The brothers were found dead in the apartment in 1947; Langley had fallen victim to one of his own booby traps while Homer died of malnutrition. It took weeks to find his body amid all the accumulated junk. The authorities followed the stench.