His room was bare and had one window. 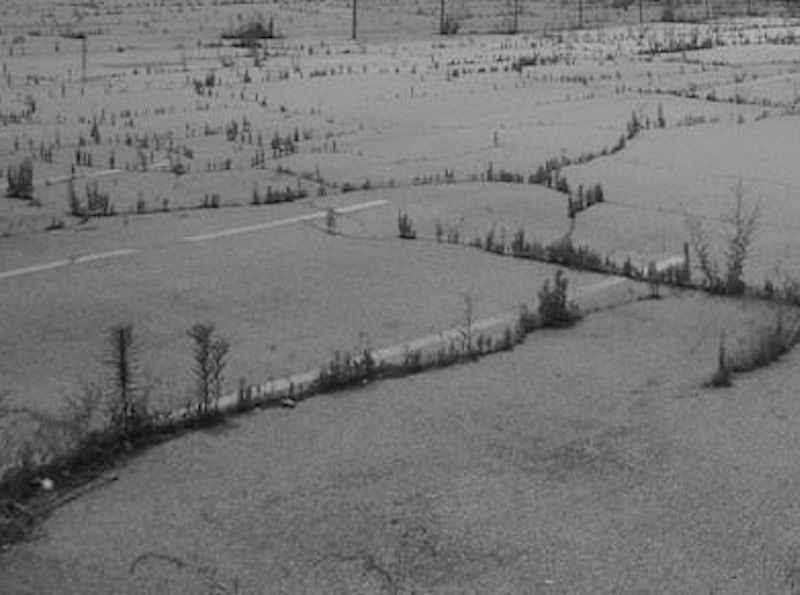 A pall cast across Millicent and Dash's December. It was as if the volume had been turned down on a radio, turned down too low to discern very much, just enough to let you know the radio was still on.

When the police found Elinor Spectre lying prone on the sidewalk, legs splayed, hem hiked in a manner that would mortify her if she were alive, she was a pale shade of blue. The cops didn't pay attention to the army helmet cast a few yards away, didn't see any connection to it and the corpse of a middle-aged lady.

A small funeral was held in Elinor's backyard, the old Victorian looming, and she was buried in the family plot. Attendees were the minister, Millicent, Dash, and an elderly great-uncle, bent and leaning on a cane, dressed in a three-piece suit that was new a long time ago.

In August, Lane Kimble was a perfectly healthy young man who was seeing red as he walked along the shore of Lake Prudence. Nary a breeze, the lake was like glass, black glass. Lane's fiancée, Trixie, had phoned him an hour ago, ending their engagement. She had a new guy, Hoke Williams, someone Lane wasn't crazy about prior to this. He'd suspected the weasel. As Lane walked he noticed a figure ahead, someone sitting near the shore. As he drew closer he saw that it was Hoke. Damn!

Hoke glanced over, did a double-take. His suddenly ashen face signaled fear. He stood, brushing sand off the seat of his bells, and said, "Hey, Lane. Look, fella, I can explain..."

At the sound of that voice, that nasal timbre, something in Lane ignited, flared. He didn't think; he snapped. A roundhouse connected to Hoke, square on Hoke's nose, knocking him off his feet, his nose gushing blood. Stumbling backwards, Hoke hit the ground, the back of his head slamming on a rock with a nauseating thud. He died instantly, his gray eyes staring into a void. Kneeling beside him, frantic with an avalanche of regret, Lane tried to revive him until he realized it was hopeless.

His hands were covered with Hoke's blood! He washed them furiously in the lake, looking side to side, and up to the top of a hill, making sure no one had seen him.

Panicked, Lane jogged back to his Nova SS, slouched in and sped away. He had about $50 in his wallet and no plan other than to leave town, find a new place, and get some sort of scrubby job where, hopefully, he could fade into a new existence. He knew that by running away he'd make himself even more of an immediate suspect, but he felt he had no choice. He'd crumble in the presence of police. Was he supposed to go to jail for life—or face execution!—for one lousy slip? It was an accident! If Hoke's head had landed a few inches to either side it would've hit soft sand, he would've suffered little more than a bloody nose. Dammit!

He drove to a city in the next state, worked a few weeks loading trucks for a small firm, then felt the need to press on. Skipping towns like a small flat stone skipping across a pond he picked up odd jobs. For a steep price he bought a counterfeit driver's license and Social Security card under his new name, Bill Jones. And he grew a mustache, hoping for a bit of camouflage. He'd considered a beard, but maybe that was too obvious of a move? He didn't know. He'd never been on the lam before.

By late-November he was living in a small rundown hotel. His room was bare and had one window. Down the hall, a TV never seemed to be turned off: farm report, Captain Kangaroo, game shows, soap operas, cartoons, news, sit-coms, late-movie, the anthem, static, repeat. His view was a parking lot of cracked macadam, weeds pushing through and up. "Give credit to the almighty weed," he thought. "The weed doesn't quit, not without a fight."

Bill Jones lived with fear, his constant companion, faithful as a beagle, toxic as a cobra. Even something as ordinary as getting a sandwich and coffee was fraught. In public, he wore a cap, the bill pulled low. His hands trembled, ever so slightly.

He slept with the aid of Sominex; mornings he made several strong cups of instant using hot tap water before heading out. He felt drained constantly. Still, he had to work.

In late-December, now in a very nondescript Falcon, he rolled into Thornton, found lodging at a boarding house in a diminished neighborhood. He sat down to Christmas dinner with strangers: Dash, his guest Millicent, old Sailor Bill, a few others, presided over by the mistress of the house, stout and steely Mrs. McGillicuddy. After dessert a bottle of sherry was opened and Bill Jones happily accepted a tumbler. The sweet wine warmed his throat and his heart. For the first time since the killing he relaxed, he smiled, he laughed, he trusted. For a suspended moment he could forget that he was wanted for murder, that a DA could add a bright feather to his legal cap by sending him to the gas chamber. As he drained his glass he wondered how Trixie's Christmas was.