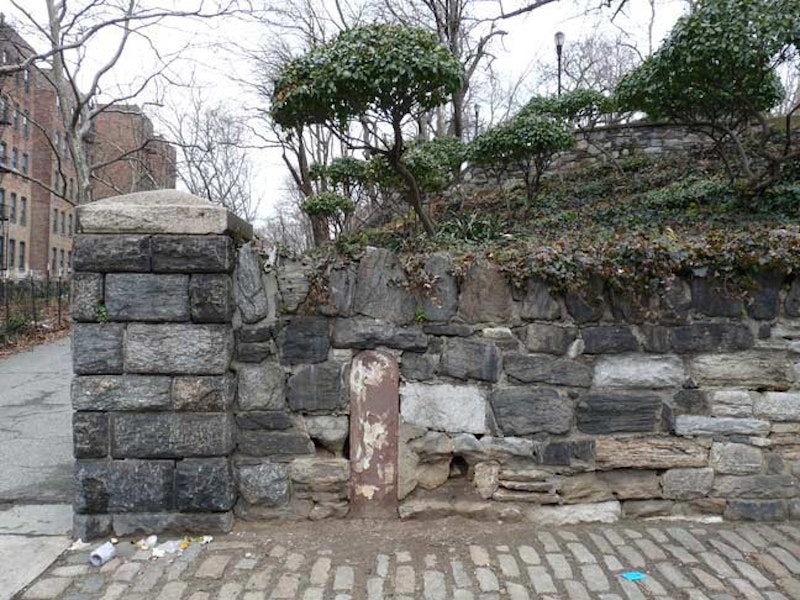 While meandering aimlessly in upper Manhattan in February, 2013 I came upon a single intersection, Broadway and Isham Street, where there are several leftover relicts from several different ages that still survive. The Isham (pronounced EYE-sham) family, who lived in northern Manhattan in the 19th century, donated some of their land to the city in 1912, which was made into the park, and a street that was later built here also got the Isham name.

If you exit the 207th Street station, the end of the line of the A train, at the northern end, you’ll be on Broadway a bit north of Isham Street. From there, walk a short way up Broadway to the entrance of Isham Park, one of three large parks in upper Manhattan along the Hudson River. You will see a retaining wall made of boulders where the southern entrance to the park leads west. There is a door-like object in brownstone right next to the entrance. It’s not a door, it’s the 12-mile marker of the Post Road to Boston (and Albany, the roads split in the Bronx), which, at one time, was the only road in these parts.

The Post Road, which followed a Native American trail, was established in 1673. Couriers bringing mail to different locales in the colonies traveled the trail, which was then very rough and interrupted in several locations. Couriers would mark miles by hacking cuts into trees at intervals. After nearly a century, the road was straightened and improved somewhat between New York and Boston, and from 1753-1769 heavy stone markers were set at one-mile intervals, with the surveying supervised by Benjamin Franklin. Postal rates were set by the distances between one spot and the other. Did “Poor Richard” handle this 12-mile marker? Perhaps he did.

Marker #12 was originally placed on the Post Road (later Kingsbridge Road and later, Broadway) and where 190th Street is now, but when distances were recalibrated with 0 at City Hall, the stone was moved to about 203rd Street, where it was later abandoned. At some point in the early 20th century, it was placed in the Isham Park wall. Over the years, the writing on the stone has weathered off, or was chiseled off by vandals.

Other mile markers are still extant: #10 is at the New-York Historical Society and #11, with its lettering worn off as well, is in Roger Morris Park at the Morris-Jumel Mansion at Edgecombe Avenue and West 160th Street.

The old Post Road itself survives in the paths of the Bowery and 4th Avenue downtown, Broadway uptown, and in Van Cortlandt Avenue and Bussing Avenue in the Bronx (Boston Road was built as a connector road to the Post Road in the 19th Century.) The old Post Road route is also followed along parts of US 1 into New England. 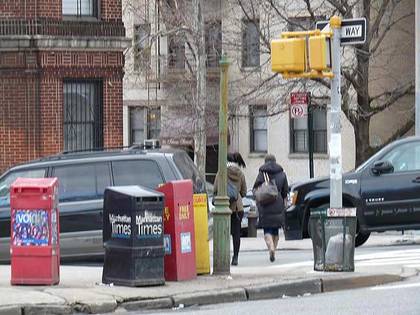 Here’s a relatively newer relic from the 19th Century: a surviving iron post at Broadway and West 211th, directly across Broadway from the mile marker. It is possibly the sole survivor of NYC’s public street gaslamps except for another one in Patchin Place in the Village, and every time I see it I marvel that it’s still there. Recent research on my part has shown that it might have been a street sign stanchion and not a gaslamp, but in any case, it’s almost certainly over a century old. 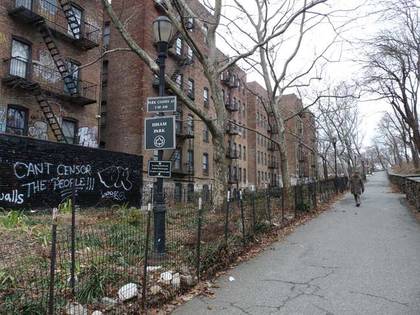 The Isham Park entrance features a row of Type A park lamps, rarer than their Type B cousins. The main difference between A and B is that the A shafts are taller.

Like other parks in northern Manhattan, the site of Isham Park played a crucial role in the battle of Fort Washington during the American Revolution. The site served as a landing point for Hessian troops coming up the Harlem River to drive the American forces to Westchester and New Jersey.

In 1864, leather merchant William Isham purchased 24 acres of land uptown along the Harlem River and constructed a grand mansion. After his death, his daughter Julia Isham Taylor donated a parcel of his property to the city in 1912, and her daughter Flora in turn donated her portion four years later. A public park was constructed in 1927; alas, the mansion was razed in 1940, at a time when other such mansions such as the Bliss Estate in Bay Ridge, Brooklyn were demolished by parks czar Robert Moses. 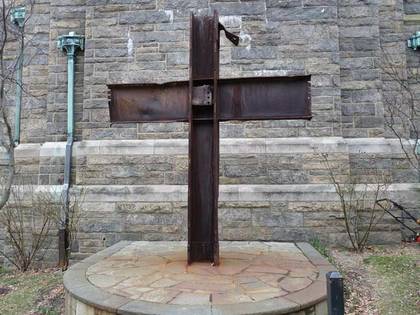 Good Shepherd Church at Broadway and Isham celebrated its 100th anniversary in 2012. The first church was a wood frame building that was moved across Cooper Street around 1930 and later razed to make way for an addition to the elementary school. When the IND subway reached Inwood in the early 1930s, the population increased, necessitating a bigger church. The present Romanesque church was built in 1935 from Fordham gneiss mined in Manhattan and Bronx quarries.

On the Isham Street side of the church is an iron cross that was salvaged from the ruins of the World Trade Center. It was installed as a memorial garden at Good Shepherd Church on June 7, 2002. 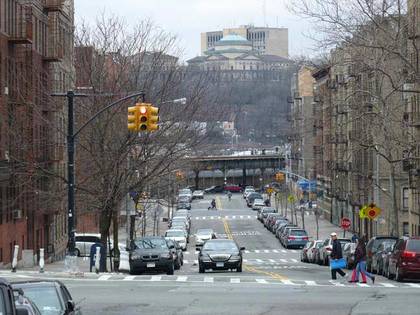 Looking east on Isham Street you see the dome of the Gould Memorial Library, constructed in 1899 by Stanford White, on the campus of what was New York University but is now Bronx Community College.

Squint and you can see the colonnades of the Hall of Fame for Great Americans, where you will find busts of 98 of the country’s greatest politicans, scholars, teachers, and authors, created by some of the country’s most noted sculptors. Even the name plates under the busts were made by Tiffany Studios. Most of the names familiar from American history books can be found in the Hall, including Abraham Lincoln, Alexander Graham Bell, Samuel Morse, Robert Fulton, the Wright brothers and Thomas Edison. There are several lesser-known figures too, such as astronomers Simon Newcomb and Maria Mitchell, the first American Nobel Prize winner for science, Albert Michelson, and anaesthetist William T. Green Morton.