No Cupholders on Sailboats 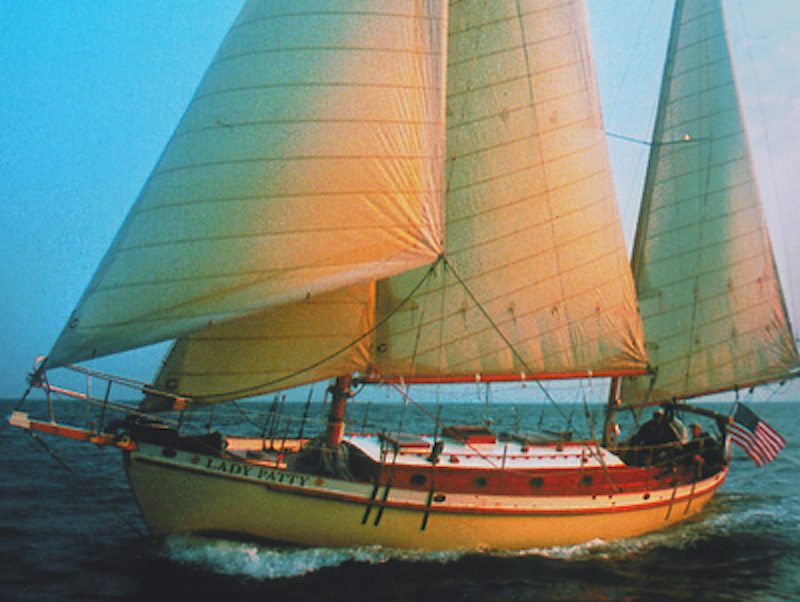 During the past four years, I’ve been writing on a little island in the Chesapeake Bay. I fell in love with Tilghman Island from the moment I crossed its tiny drawbridge. Although living on the island fulltime unfortunately isn’t an option because my kids are in a school district 40 miles away, I’ve been lucky to be able to rent a small writing cottage on the water—where I’m working on a memoir—from wonderful friends.

As many hundreds of times as I’ve set out by water on my little kayak, and often enough times on power boats, I’d never left the island in a sailboat until the other night. Before she went to college, my oldest daughter Sarah used to live on the island and worked as the first mate on the Lady Patty, a fully restored wooden 45’ 1935-built sailing yacht with a great racing history. But for some reason I never made it out for a sail while she worked on it; I should’ve.

But I just wrapped up a summer of selling a huge private sea glass collection, and I was feeling celebratory, so a friend and I who hadn’t seen each other all summer took a girls’ night out sunset cruise. Cue the Christopher Cross song “Sailing,” because the friendly captain Jeff Mathias became my hero by proclaiming his shared love for soft hits of the 70s right off the bat; we both love the “Yacht Rock” music channel.

As we set out from the Knapp’s Narrows Marina harbor, which I normally do with my paddle in hand, I once again couldn’t believe I’d never seen the Chesapeake this way. The waters were calm when we first went out, so as the giant sails were hoisted up, the boat didn’t go far. First mate Emma offered drinks: complimentary champagne would be served a bit later, closer to sunset, but for now we were asked if we’d like wine, craft distilled beers, Dark & Stormy cocktails, or the house special of fresh-fruit squeezed Clementine Margaritas.

Generous-sized and poured drinks were served in custom Lady Patty glasses with fresh fruit, and suddenly I felt like I was in Nantucket. This was all pretty fancy for Tilghman; a place where I’m used to buying Jack Daniels and Slim Jims at the country store and maybe a Diet Coke-and-cherry-Slurpee mix after a hot kayaking ride. It was a fun change, and I sat back and enjoyed the beautifully polished vintage teak floors and brass fittings of the vintage boat as the breeze finally kicked in and the boat started to move on its own, picking up speed as the sails filled with air and I realized what sailing meant. It was a gorgeous feeling to drift through the water that way, with the wind in your hair, without having to work for it like I do in my kayak.

My friend and I had made the girls-night choice to split a bottle of Prosecco before the boat left, so we were pretty giddy when it seemed like a good idea to start taking “Jack and Rose Titanic” photos at the bow of the boat. I didn’t want to walk on the moving sailboat with a drink in hand and my friend, who grew up sailing, said, “That’s the great thing about sailboats, they don’t have cupholders.” Like it was the difference between them and powerboats. I don’t know why I thought this was hysterical, but I laughed trying to make my way across the boat, and when we saw the photos poor first mate Emma took, they were such a Titanic Lesbian-Love-Boat disaster (nicknamed “Lesboat”—although we are both happily married to men, we figured everyone on the boat probably assumed otherwise) that we laughed until we cried—trust me, that photo didn’t make it into the Facebook photo album. It won’t be soon that I’ll be trading my beat-up kayak for a fancy vintage yacht, but sailing was definitely the way I’ve always heard it could be.