Impressions of Austin Parks and Rec

A whirlwind tour of the city’s natural attractions. 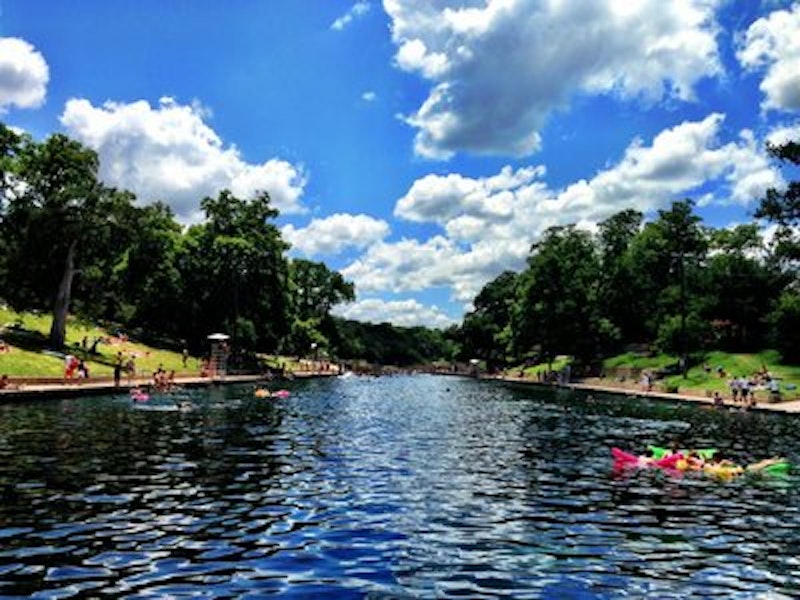 Barton Springs—The free, rugged part of this swimming hole—outside the public pool—is for the dogs. It’s Barton Creek or “Barking Springs,” a wading area overtaken by canines. Admittedly, some puppies look cute, wet and swimming the length of the creek. They get on the big tortoise shell of rock in the sun with shouting parents, teens and little duck-like splashing kids near where the water falls from the enclosed pool. The dogs are the happiest, sun-crazed shepherds of the good life. They drink from the falls, wet their heads and dive off the tortoise shell into the stream. Shirtless guys and bikinied girls, barefoot twentysomethings, gingerly course across jagged rocks, slowed by the current. They have backpacks on as if they’ve enjoyed camping or a long hike. They’re finishing their excursion, getting out of the water, and the dogs paddle by them. Sometimes it pays to be a little buoyant Chihuahua. But dogs are also polluters, and guardians do not readily scoop up after them. “Leave no trace” is just a suggestion. I’m reading Mark Twain’s The Innocents Abroad and my friend has a book on utopias. We throw up a little when a wet dog craps in the brush near our perch on a tree root and a breeze catches the smell. We walk off in the direction of parties kayaking downstream. The Chihuahua speeds ahead on our left, sniffing out a mystery through grasses, dirt and rocks. “A Chihuahua is an okay companion,” my friend concedes.

The pool beyond the ticket office is expansive, supplied by underground springs. The shallow end begins with untouched slabs of rock perfect for sunbathing. You can go slowly, feet in first, wading through the algae-rich cool as the slippery rock floor declines. Then you dip your head under before treading water, splashing, then darting with a breaststroke toward the ladder at the midsection of the wall, where there are diving boards off which daring swimmers backflip, dive or belly-flop. Beyond that is a true deep end for those capable of swimming laps or keeping afloat. Other attractions of Barton Springs include a ride for the kids on the miniature train, the Zilker Zephyr, and endangered salamanders. If you’re lucky, you may look down the ringed well, the Eliza Spring or “Polio Pit,” and see tiny, frog-headed, long-tailed Barton Springs celebrities. We spy one sprinting toward bushes upon entering the pool.

Shoal Creek—My friend and I bike mixed-surface trails, burning off a breakfast of pancakes, sausage and eggs. Rivaling the visual stimulation of Mario Kart, the course provides our touring bikes narrow runs under bridges and bends along the creek. We shoot over pavement and dirt paths. At points, however, our bikes suffer wipeout sands and yards of rocks, stones and pebbles. We try the grass, but a guy at a picnic table warns us, “Don’t ride the grass!” He’s a sunburnt wino in a sock hat. “The grass will pop your tires. I’ve seen it happen. Nobody knows it, but the grass has sharp needles in it.” At one point, our bikes compete with parents running while pushing baby carriages over gravel, down lanes, around the bend, and thundering over otherwise quaint bridges. An old guy, jogging, turns around to check out a passing woman’s derrière. When we catch him at it, he reddens and fakes the need to run backwards for a minute. We blow by and then laugh about it.

Blunn Creek Greenbelt—You have enough The North Face attire on the bodies of athletic young professionals to blanket half the park. Don’t attempt to polish off a bottle of wine or make out under the bridge because someone will stop above you to take a call about stocks, properties or private jets. The hotshot leaves. My friend and I want to get wasted and have fun in a remote spot. Under the bridge, we survey our surroundings: bum-piss rocks, a colorful gift bag with an emptied Christmas card, twisted winter bushes and trees. We listen to the water’s stress-relieving soundtrack.

McKinney Falls State Park—Everything is bigger in Texas. Big fluffy, husky deer eye-fuck you at nighttime when you’re getting in the tent. If you make barbecue chicken and eggplant over the campfire for your new Austin friends, don’t leave your pepper jack cheese from Whole Foods out on the picnic table overnight, because Mr. Raccoon loves expensive cheeses. He’ll throw down your bag of ice, gank your cheese and cast your dirty barbecue, and bike-grease-stained rag high up in a tree, or does the wind do that? Then there’s the “urban coyote problem” that Austin has. Each night coyotes howl and croon, and it’s frightening as the voices gather numbers and encroach. Some nights howls are answered with gunshots. You stay awake not knowing how close they are, but you doubt there will be trouble, and you’re content to be serenaded. One night, college kids run by our campsite wearing hoods and glow rings, chanting and rapping.

You’ll love the falls. If you decide to swim, the natural pool is refreshing and deep in the middle. If you can make it over to the rock face and algae-covered ledges, where lovers kiss in a snug, obscured cleft, I recommend that you enjoy a warm shower from the tiny waterfall issuing from sun-baked stones. The dinosaur rockscape, diseased, dying or thriving cacti, the murdered forest that suffered a flood—you see all this on the winding bike trail. The flood made firewood of trees and picnic tables. The rangers won’t let you gather it.

Don’t take advice from a friendly ranger with a bulbous belly and big cowboy hat. Don’t let him recommend a bike trail (mostly a highway) to take downtown, and ignore his poetry about a burger special at Sandy’s. One can’t totally hate Sandy’s, but it’s very much time-honored fast food, how McDonald’s or Burger King might have been ages ago. We have to get back on the trail to work this crap off. That burger special was four dollars. It’s allowed to suck. Wait in line for Hopdoddy Burger Bar instead.