The Swedish Cottage isn't the only hidden treasure of New York's Central Park. 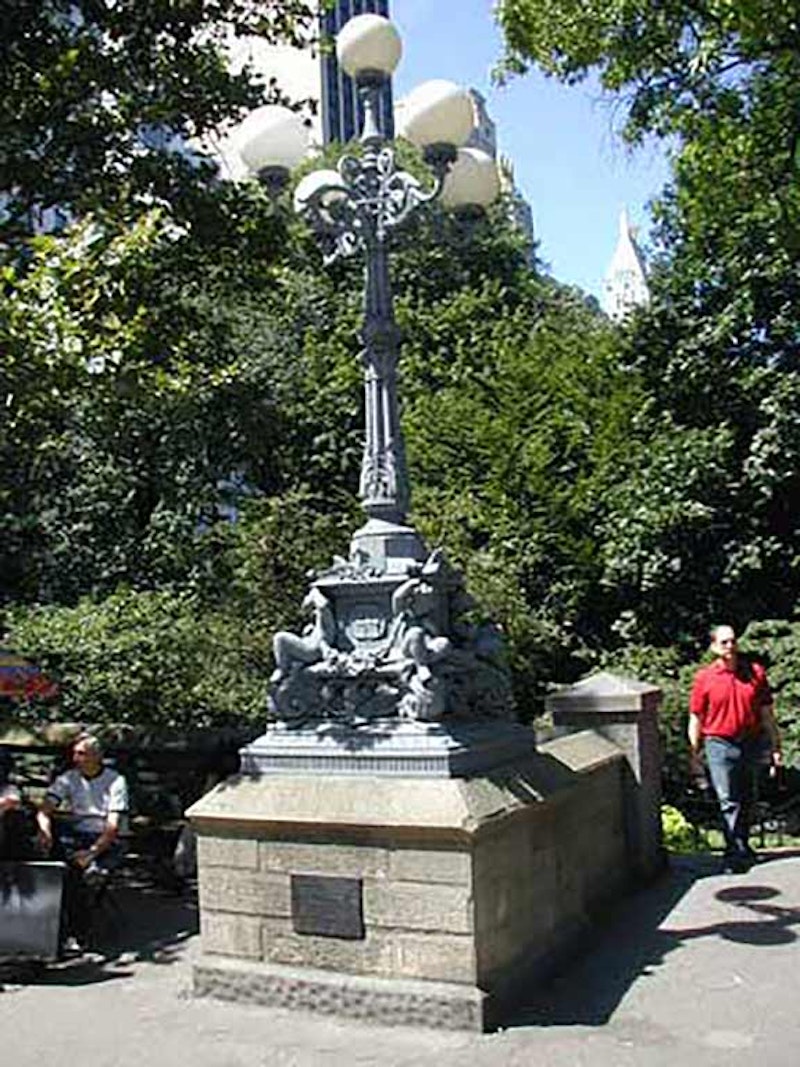 Central Park is vast enough so that a lot of highlights are missed by the public. This lamp, found at a park entrance at Grand Army Plaza at 5th Ave. and 60th St., was donated by Hamburg, West Germany in 1979 and is a replica of an ornate lamp found in Hamburg at the Lombard Bridge. The plaque reads “This Lombard Lamp is presented to the people of New York City and by the people of the Free and Hanseatic City of Hamburg so that it may forever brighten a bridge of friendship in human relations, trade and commerce. A second Lombard Lamp replica was donated to Chicago, which placed it in its Lincoln Square neighborhood in the same year.

The Lombards, or Longobards, were a Germanic tribe that began in southern Sweden and worked way down into Italy in the early medieval period, becoming Italians in the process and giving their name to the northern Italian region of Lombardia. Their name, the Longobards, referred to their lengthy beards. 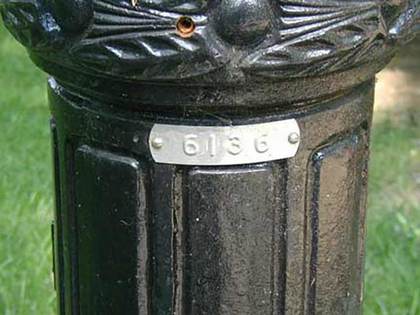 Cast-iron lampposts designed by architect Henry Bacon (who also designed the Lincoln Memorial) in 1907 are standard issue throughout Central Park, as well as in parks citywide. For thicker, expanded versions of the Henry Bacon theme, check out the new lampposts along Brooklyn’s Eastern Parkway, which used the Bacon posts as a template during the Parkway’s renovation in the 1990s. The distinctive new luminaires were designed by Kent Bloomer and Associates of New Haven, Connecticut. For some years, the city has marked most of Central Park’s lampposts with embossed numbered metal plaques. The first two or three digits correspond to the cross street you’d be on if that street extended through the park. So, the post above is located where 61st St. would be.

The park’s 1960s-style octagonal poles and Donald Deskey posts have been given the same treatment, as well as a green coat of paint (unique in the city). In addition to the cross street, some of them also bear a W, C, or E, corresponding, respectively, to the western, central or eastern part of the park. 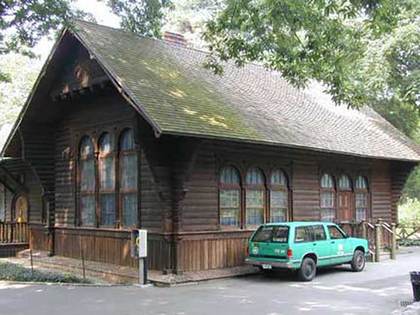 The Swedish Cottage was actually built in Sweden, in 1876. It originally appeared in Philadelphia at its Centennial Exhibition and was disassembled and reassembled in Central Park the next year, after it was purchased for $1500. It has found use as a storage shed, a public restroom, an insect lab, a Civil Defense headquarters and, since 1947, as a marionette theater. It’s just east of the Natural History Museum on Central Park West. 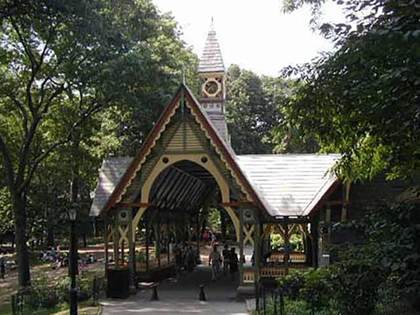 There was once a time when it was difficult to get clean, fresh milk, before the age of pasteurization. City children were sickened, some fatally, from tainted milk. In both Central Park and Brooklyn’s Prospect Park, facilities were set up that allowed people to obtain milk from authorized producers back when every nutritionist in the world swore that whole milk was good for you.

Central Park’s Dairy was designed by Calvert Vaux and built in 1870, and is the hub of the park’s Children’s District: the Zoo is to its east and the Carousel is to its west. The Victorian Gothic building added coffee and sandwiches and was a lively gathering place until the early part of the 20th century. Then the rot set in, accelerated by the Depression; the decaying Dairy was used as a storage shed by the 1950s. The Central Park Conservancy succeeded in restoring the Dairy by 1980 and today it serves as the park’s Visitor Center, though you have to go elsewhere in the park for milk or other beverages. 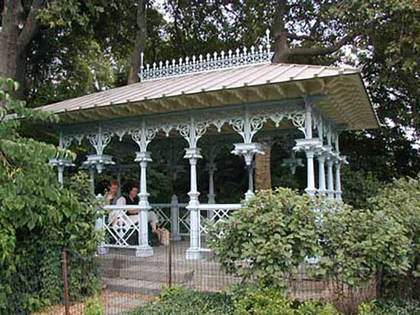 To find another of the park’s surprises you have to make a detour to the park path along the west side of the lake. A short peninsula juts into the lake, affording stellar photo opportunities. The peninsula is called “Hernshead,” Old English for “heron head” but according to birdwatchers, the wading birds like herons and egrets stay away from Hernshead. A curving path takes you through a maze of flowering vegetation until you’re lakeside, affording a good view of the massive San Remo Apartment towers, built in 1929.

The crown jewel of Hernshead is the Ladies’ Pavilion, which dates back to 1871 and was designed by Jacob Wrey Mould, who also “moulded” the concrete creations at Terrace Bridge. It was originally a trolley car shelter at Columbus Circle, but after years of rust and neglect it was taken apart, repaired and reassembled in the early-1970s. The elements and vandals are always on the attack and the Pavilion has been renovated at intervals in subsequent years.

The Ladies’ Pavilion is so named because it took the place of the old Ladies’ Shelter, which gave women skating at the old Ladies’ Pond site the opportunity to change from shoes to skates without losing their dignity. It was likely moved to Hernshead around 1913. 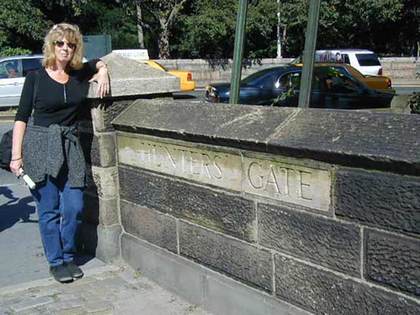