For most LA residents, North Hollywood is a place to drive through on the way to somewhere else. But the working class neighborhood is where many transplants move first. 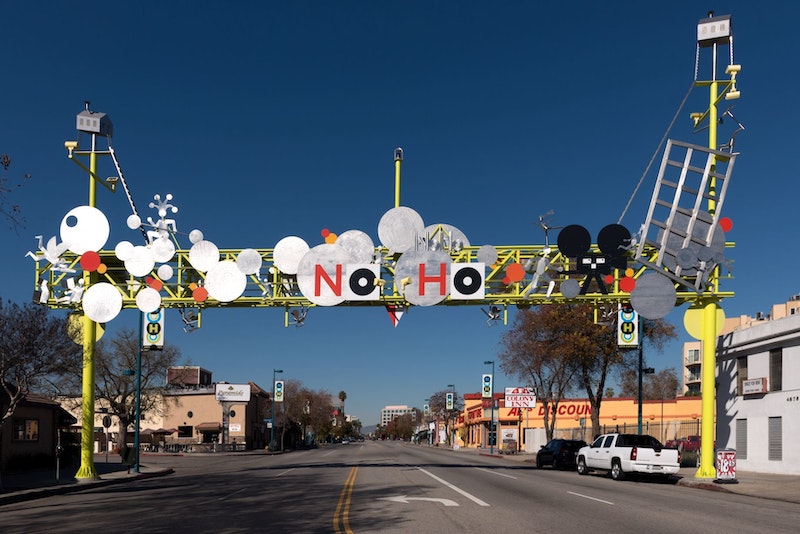 Despite its name, North Hollywood isn’t adjacent to Hollywood. It’s a small neighborhood in the San Fernando Valley north of Studio City and west of Burbank. The area is largely working-class with more than half the residents of Latino heritage. It’s dense with multi-level apartment buildings and small homes interspersed among car repair shops, dental offices and taco bars.

North Hollywood is home to more than a dozen recording studios. The Alley on Lankershim is where Frank Sinatra, Michael Jackson, Fleetwood Mac and Jimi Hendrix recorded albums. Barris Kustom Auto on Riverside Dr. is where the late George Barris stored his television car creations including the original Batmobile, the Munster Koach Car, the Beverly Hillbillies truck and the Monkeemobile.

Like much of the San Fernando Valley, North Hollywood has hidden gems on dark streets and alleyways. The Tonga Hut on Victory Blvd. is LA’s oldest tiki bar (open since 1958). The Iliad, on the corner of Chandler & Cahuenga, is the best used bookstore in the city. Kulak’s Woodshed on Laurel Canyon is a small music venue where artists like Katy Perry and Jason Mraz played before they were stars.

For most LA residents, North Hollywood is a place to drive through on the way to somewhere else. It’s a great shortcut to Burbank Airport or Universal Studios. New LA transplants often settle in North Hollywood for cheaper rents. First time homebuyers target the area and immediately begin saving to move somewhere else. Few people brag about living in North Hollywood. The summers are brutal with temperatures 20 degrees hotter than Los Angeles. There aren’t many decent restaurants, the streets are poorly-lit and crime is a problem. (Crimegrade.org rates North Hollywood as F on violent crime and D on property crime.)

Quentin Tarantino prominently featured North Hollywood in his first two films Reservoir Dogs and Pulp Fiction. Tarantino’s North Hollywood includes 1950s-style coffee shops, sleazy motels, ugly stucco apartment buildings, metal scrapyards and warehouses where violent torture scenes ensue. Adam Carolla famously grew up in North Hollywood. He lived in various ramshackle houses including his grandmother’s home that had two front doors but only one bathroom. He described the North Hollywood of his youth as “white stupid people who didn’t care about their kids, what they did or who they did it to.”

The incident that put North Hollywood on the national map was a 1997 bank robbery and shootout. Two men wearing heavy armor and carrying multiple AK-47 rifles robbed a Bank of America on Laurel Canyon. They engaged in an hour-long shootout with police that was broadcast live on the tv news. More than 2000 rounds of ammunition were fired. Ultimately, the two men were killed while 12 officers and eight civilians were injured. The incident was a catalyst for the LAPD to acquire heavier firepower.

I grew up in Studio City and attended North Hollywood High School in the early-1980s. My teenage memories include greasy Mexican lunches at Ernie’s Tacos on Lankershim, late-night broomball at the Ice Chalet in Valley Plaza and hanging out with friends as they tinkered with their souped-up muscle cars. North Hollywood in the 80s was seedy and menacing. My friends referred to it as “the inner city for white guys.” You could score weed at North Hollywood Park on Chandler near the statue of Amelia Earhart (who lived in the area). Or you could check out the transvestite prostitutes on Sherman Way.

Lankershim had several Western clothing shops and work boot warehouses. This was a relic of the days when North Hollywood was filled with horse ranches and agricultural fields. In the early-1900s, the area’s major employer was the Bonner Fruit Company, which grew apricots, peaches and nuts. Back then the region was named Lankershim (formerly Toluca). It was renamed North Hollywood in 1927. From 1949–1995, North Hollywood’s pride and joy was the Palomino Club. The spot was a country music venue attracting performers like Johnny Cash, Patsy Cline and Willie Nelson. The club was also a hangout for struggling actors like Clint Eastwood and stuntmen like Hal Needham. The Palomino morphed into a punk rock venue before closing in 1995.

In the early-90s, local business leaders established an entertainment district in North Hollywood. They dubbed the area NOHO Arts District and filled it with theaters, galleries, cafes and mixed use apartments. A Metro Rail station opened in 2000 on Lankershim near the Television Academy Building. North Hollywood hoped for a rebranding renaissance. To me, the area remains depressing. Gang activity and drug sales are rampant. The further north you drive, the sketchier it gets. I used to ride my bike on the Chandler bike path until two teenagers tried to steal it from me.